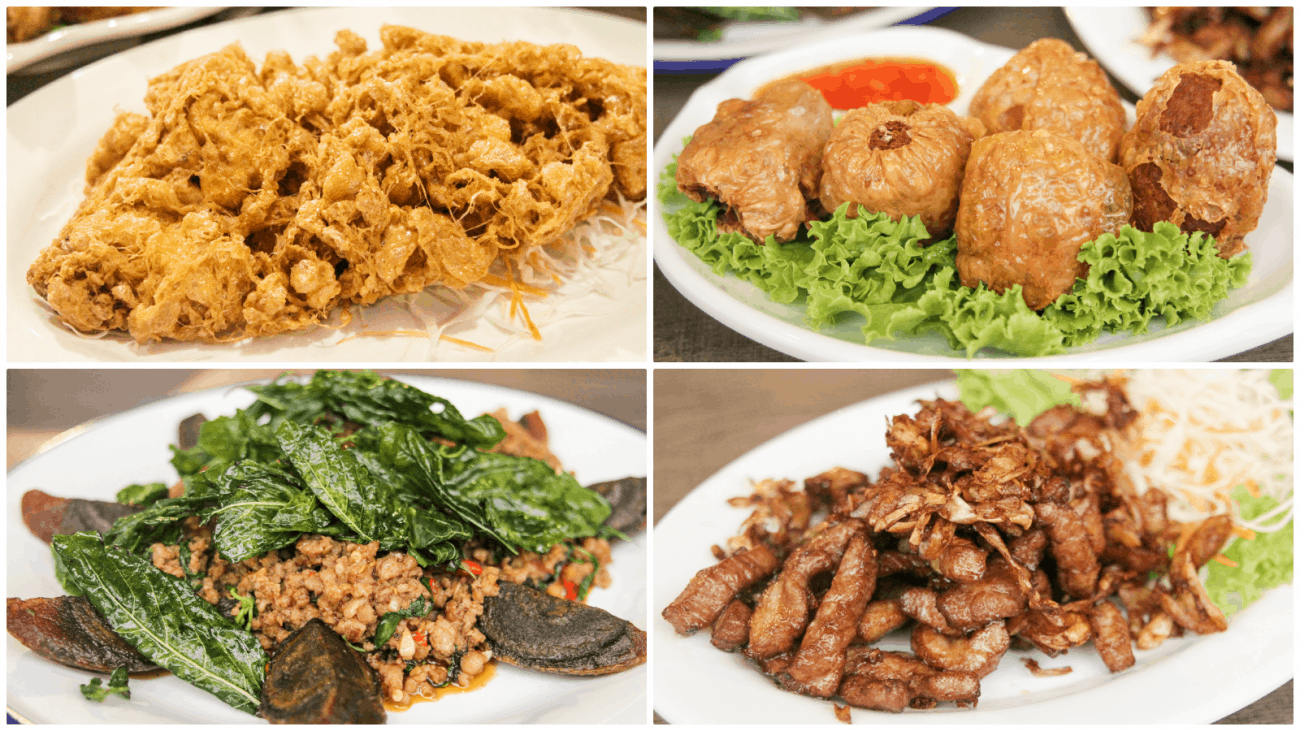 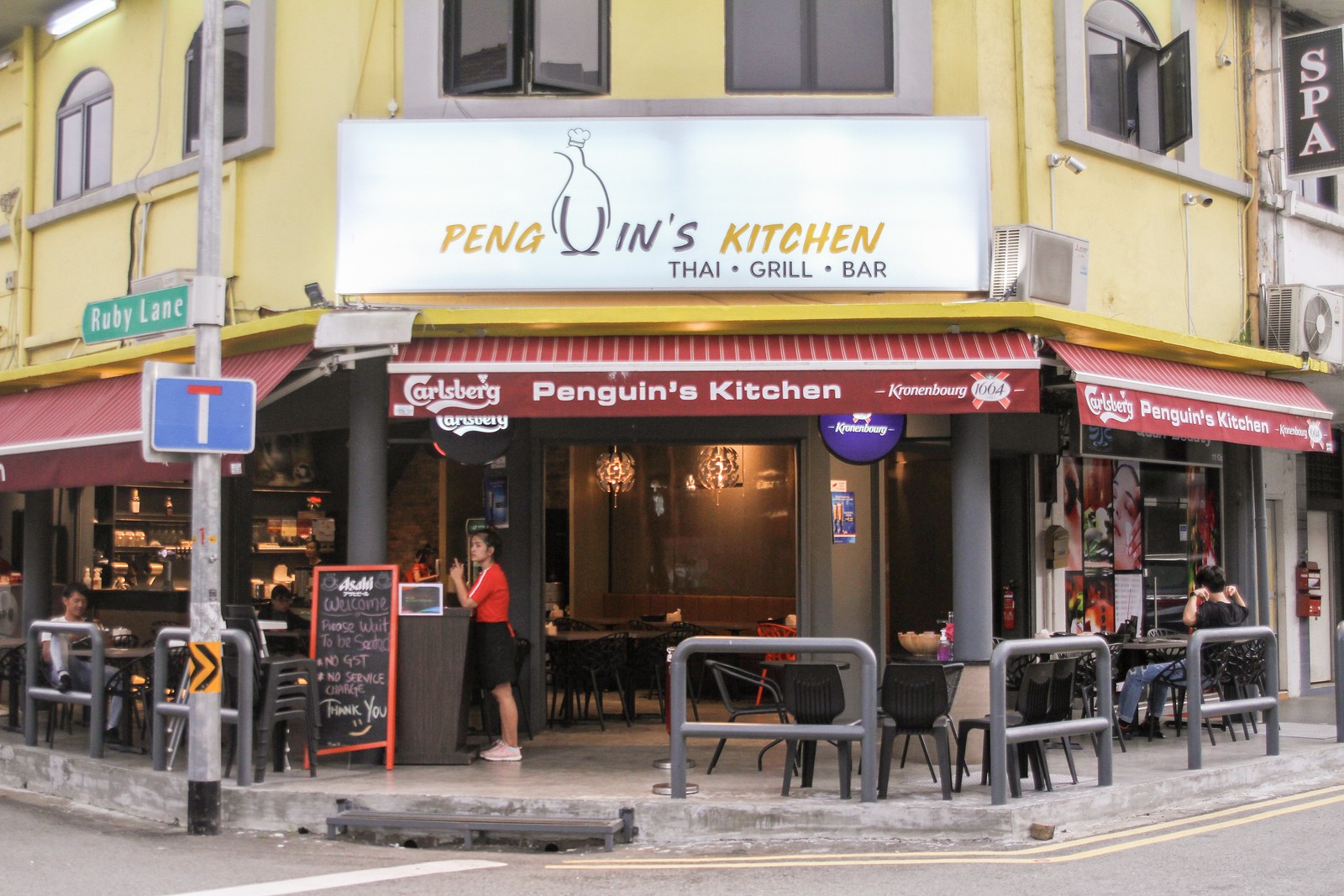 Thai Jing Jing has already been at Jalan Besar for more than 3 years, even before Penguin’s Kitchen opened for business in January 2019. “If you can take the level of spiciness of my food, go to Thailand should be no problem!” remarked Pat, the lady boss of Penguin’s Kitchen. Apart from catering to the tastebuds and preferences of local Singaporeans, Pat hopes to expose Singaporeans to authentic Thai dishes.

Thai Jing Jing is just one of three concepts in Penguin’s Kitchen. The other two are Nanyuan Noodle House, which specializes in Thai Wonton Noodles with Roasted Meat and Shrimp Dumplings, and Penguin’s Grill, which focuses mainly on Seafood.

Pat also mentioned that customers often overlook her fourth concept — Bar Bites! Yep, you can get beer by the bottle or tower here! As I couldn’t decide which concept to focus on, I decided to order something from all four menus based on Pat’s recommendations! 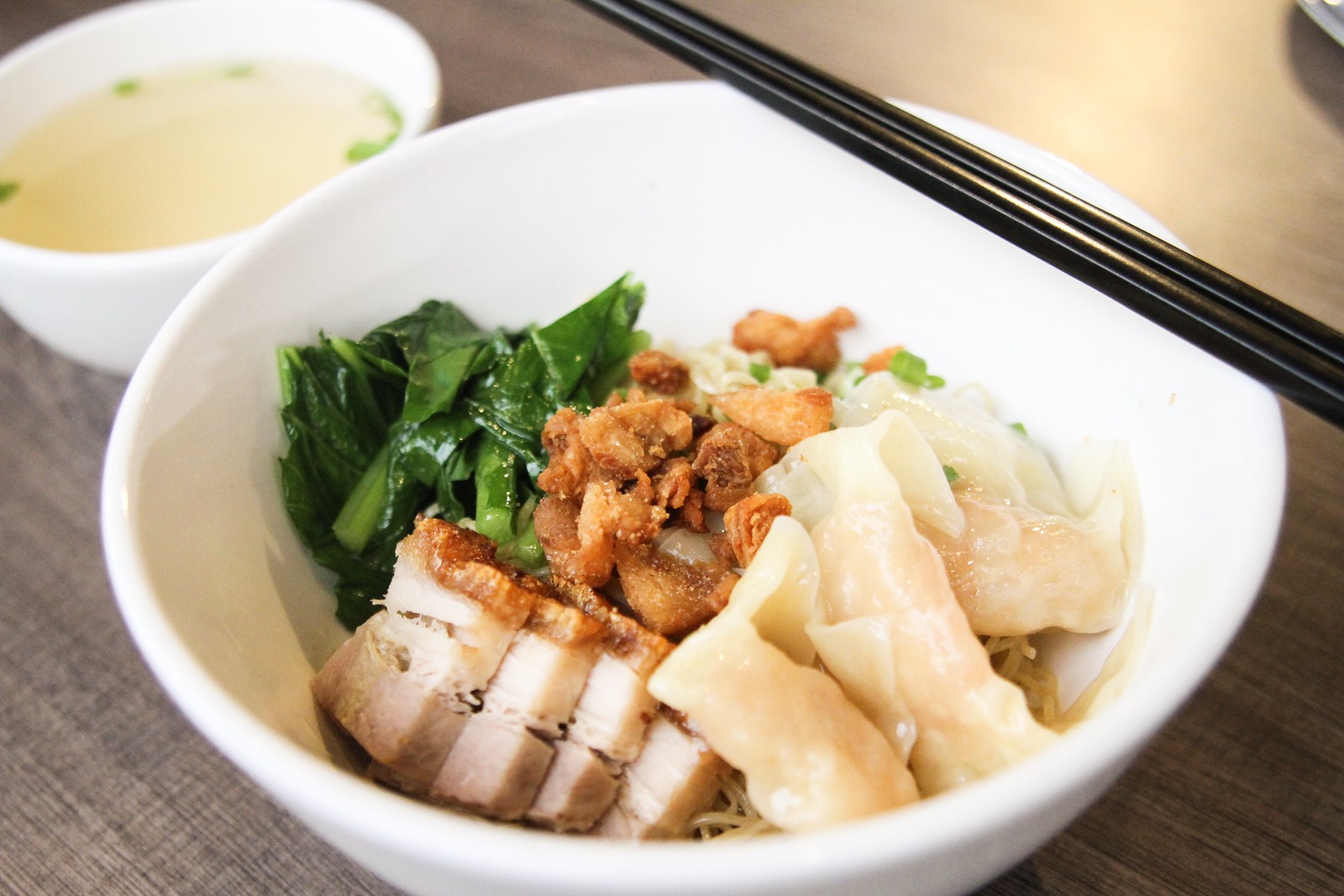 I tried the Egg Noodles with Shrimp Wontons & Crispy Pork ($5) from Nanyuan Noodle House. I opted for the dry version. The dish is popular because of the roasted pork which has a skin that crackles, and firm and moist meat. However, Pat shared that the restaurant’s speciality is actually their egg noodles! As Pat dislikes the taste of lye, she ensures that her noodles are fresh, and not infused with lye. Normal noodles tend to become sticky after they are thawed, but Pat’s noodles do not.

You May Also Like
Republic Plaza – The Business District’s New Food District! 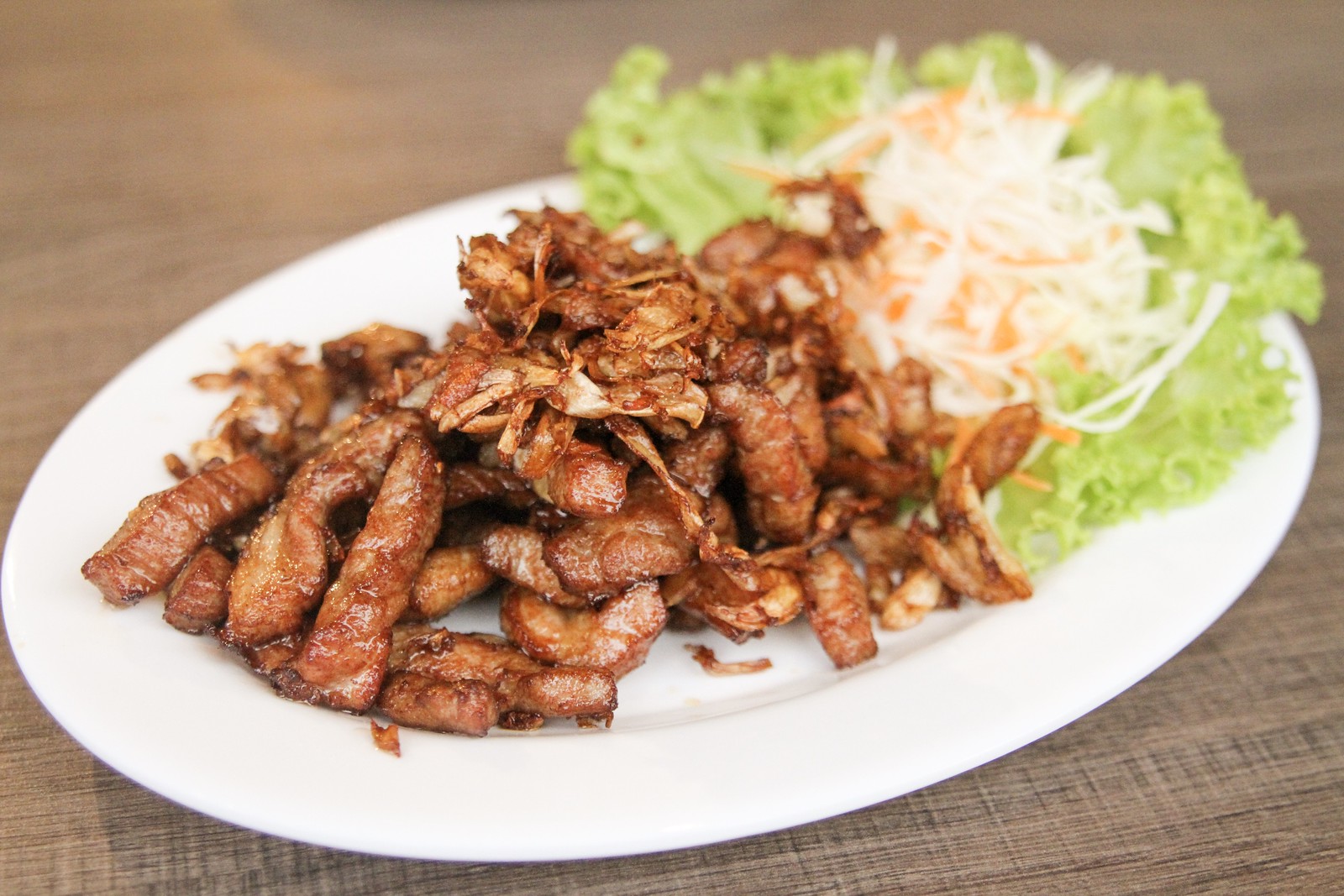 Next, I ordered a couple of dishes from Thai Jing Jing! This is their Deep Fried Garlic Pork ($12)! The aroma of this dish, which had been fried with an abundance of garlic, was just captivating. Tender and juicy meat, crisp skin, and fragrant garlic bits — what’s not to love?

Although the taste of garlic was a little overwhelming at the beginning, it grew on me. This generous portion is good for 3-4 pax. If you’re dining alone, I’ll recommend the Deep Fried Garlic Pork Rice Set ($8) which comes with a Sunny Side Egg, and Tom Yum soup on the side. 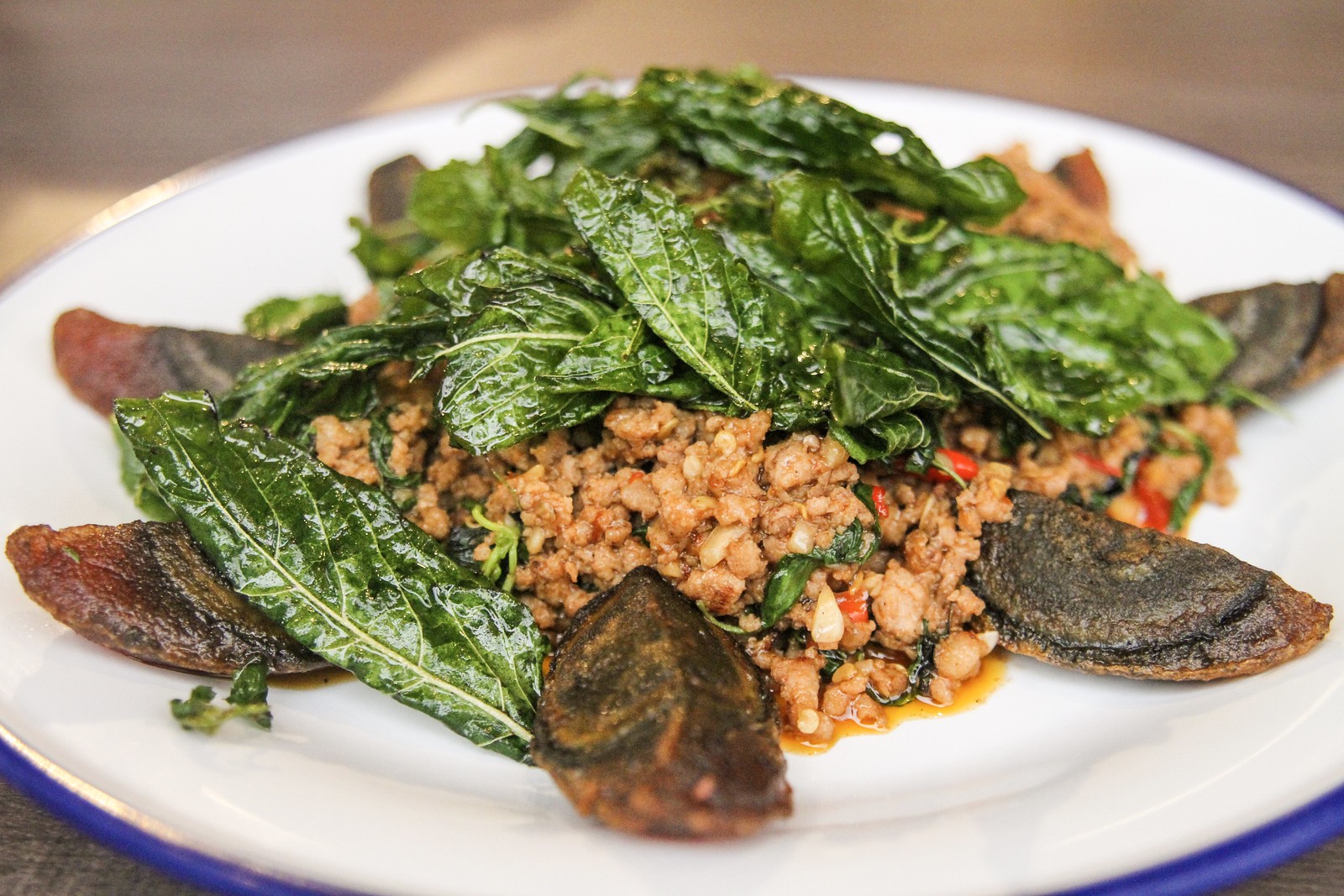 I don’t believe I’ve ever had a meal at a Thai eatery without trying their Stir-Fried Basil Pork! This is their Stir-Fried Hot Basil Pork with Deep Fried Century Egg ($18). You can also order a Chicken ($18) or Mixed Mushroom ($16) version. As Pat mentioned at the start, the restaurant’s spice levels are similar to Thai standards! I decided to challenge myself and not order a less spicy version.

Stir-fried in a savoury and aromatic sauce, the chunks of minced pork were moist and had good ratio of lean meat and fats. The bits and pieces of chilli padi that can be found mixed into the dish are probably responsible for the sharp and persistent spiciness! Moreover, if you’re a fan of century eggs, you’ll absolutely love this dish. The century egg was firm and springy, and lent a rich and earthy flavour! This dish is a must-try! 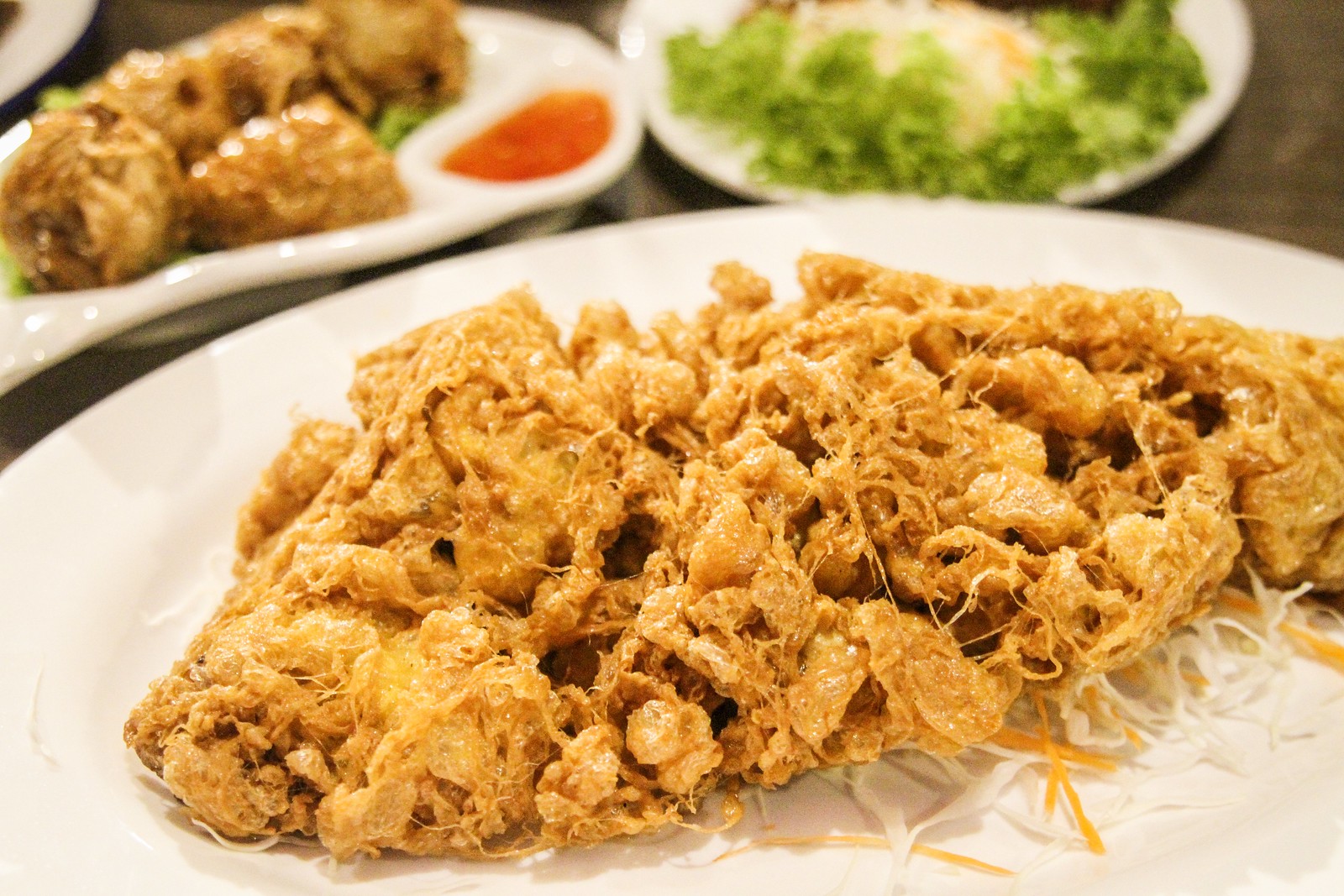 Thai Jing Jing’s Crispy Omelette comes in 4 variants — Onion ($8), Minced Pork ($9), Minced Chicken ($9), and Prawns ($10). Deep fried to a glorious golden brown, the crispy omelette somehow maintained its crispiness no matter what I ate it with. I found the winning combination. Scoop up some rice with your spoon, add on a small piece of crispy omelette, and a generous helping of basil pork, and get ready for a party in your mouth! 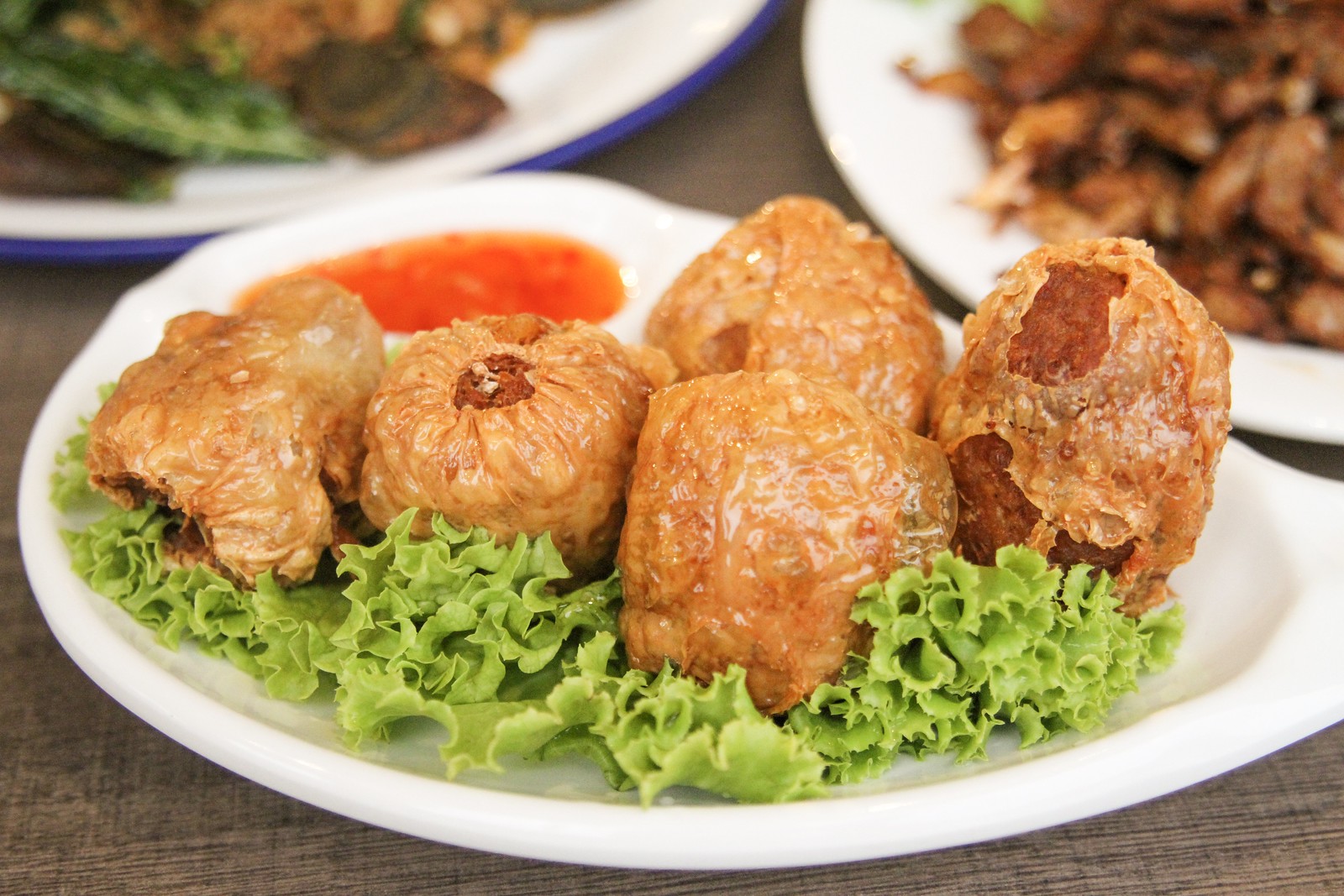 This next dish is from Bar Bites! I was reluctant to order it at first as I was more interested in trying the restaurant’s main courses but it came highly recommended by Pat. Though slightly costly for a side dish or finger food, the Crab Ngoh Hiong ($15) was surprisingly delicious?! 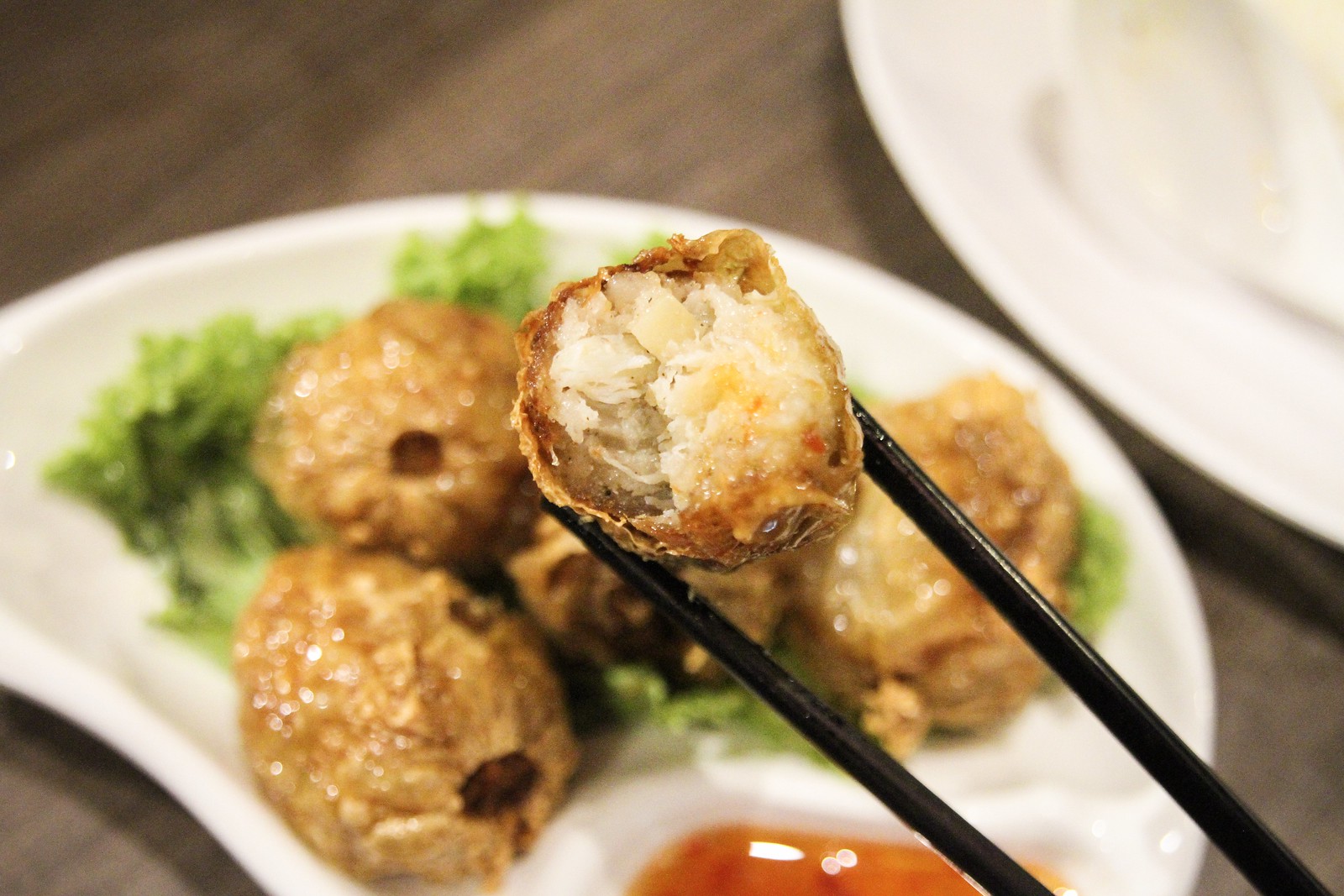 Unlike the conventional Singaporean Ngoh Hiong that’s cylindrical in shape and filled with minced meat, these Ngoh Hiong balls were filled with crab meat and other ingredients such as chestnut. The addition of chestnut gave the ngoh hiang a really nice crunch! If you’re keen on trying something new and exciting, do consider giving the Crab Ngoh Hiong at Penguin’s Kitchen a try! 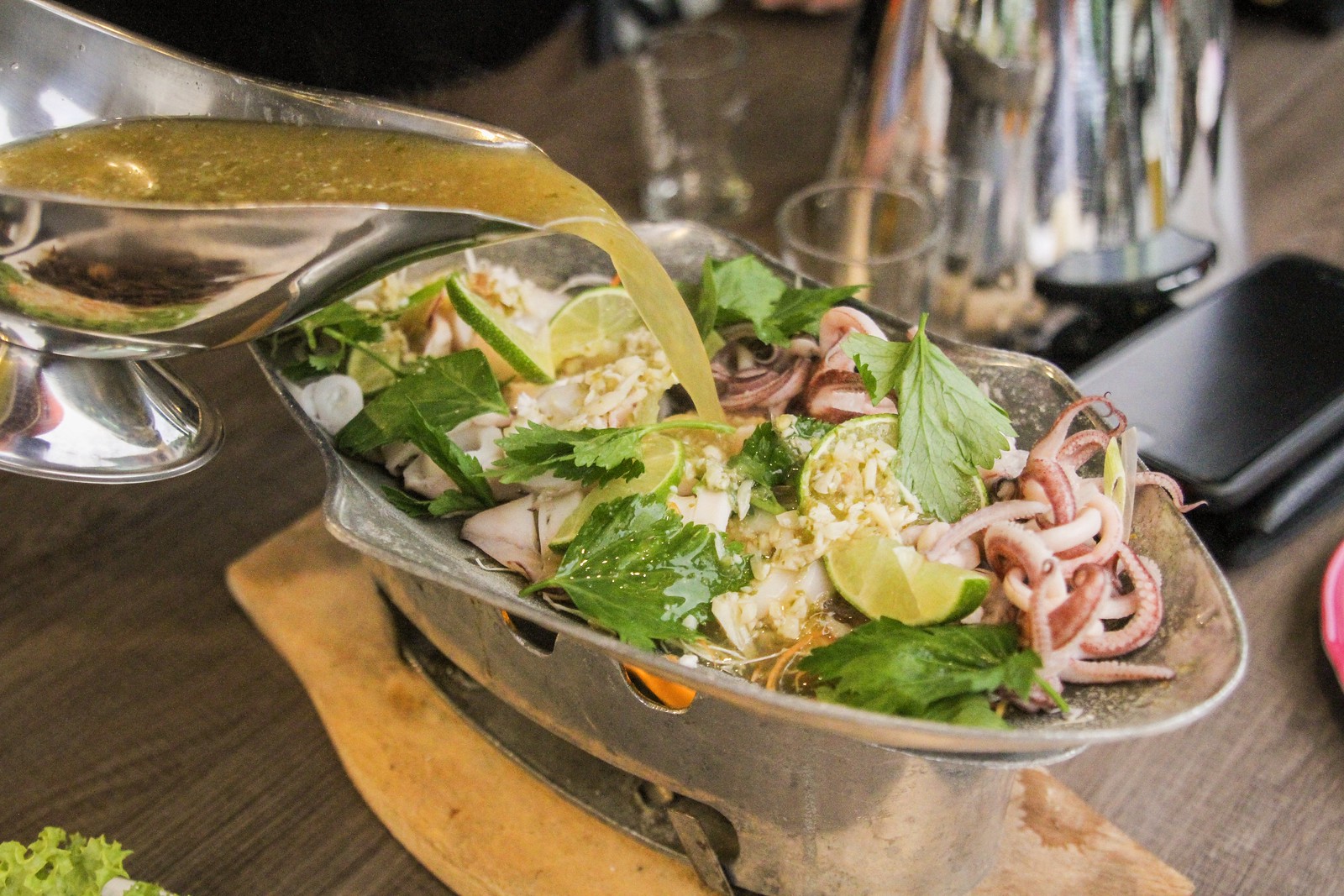 The last dish I ordered was the Squid with Spicy Chilli, Lime & Lime Sauce ($18) from Penguin’s Grill. The squid is steamed before a greenish homemade sauce and some herbs and spices are added to it! The tray was kept warm by a flame burning underneath and it allowed us to enjoy a warm piece of squid anytime during the meal. Pat mentioned that the most important aspect of this dish is the traditional homemade green sauce. 3 types of chilli from Southern Thailand are used to prepare the dish so this is definitely not for the fainthearted. The squid was cooked really well, and we thoroughly enjoyed it.

You May Also Like
Uptown Nasi Lemak - Authentic Nasi Lemak from Damansara Uptown! 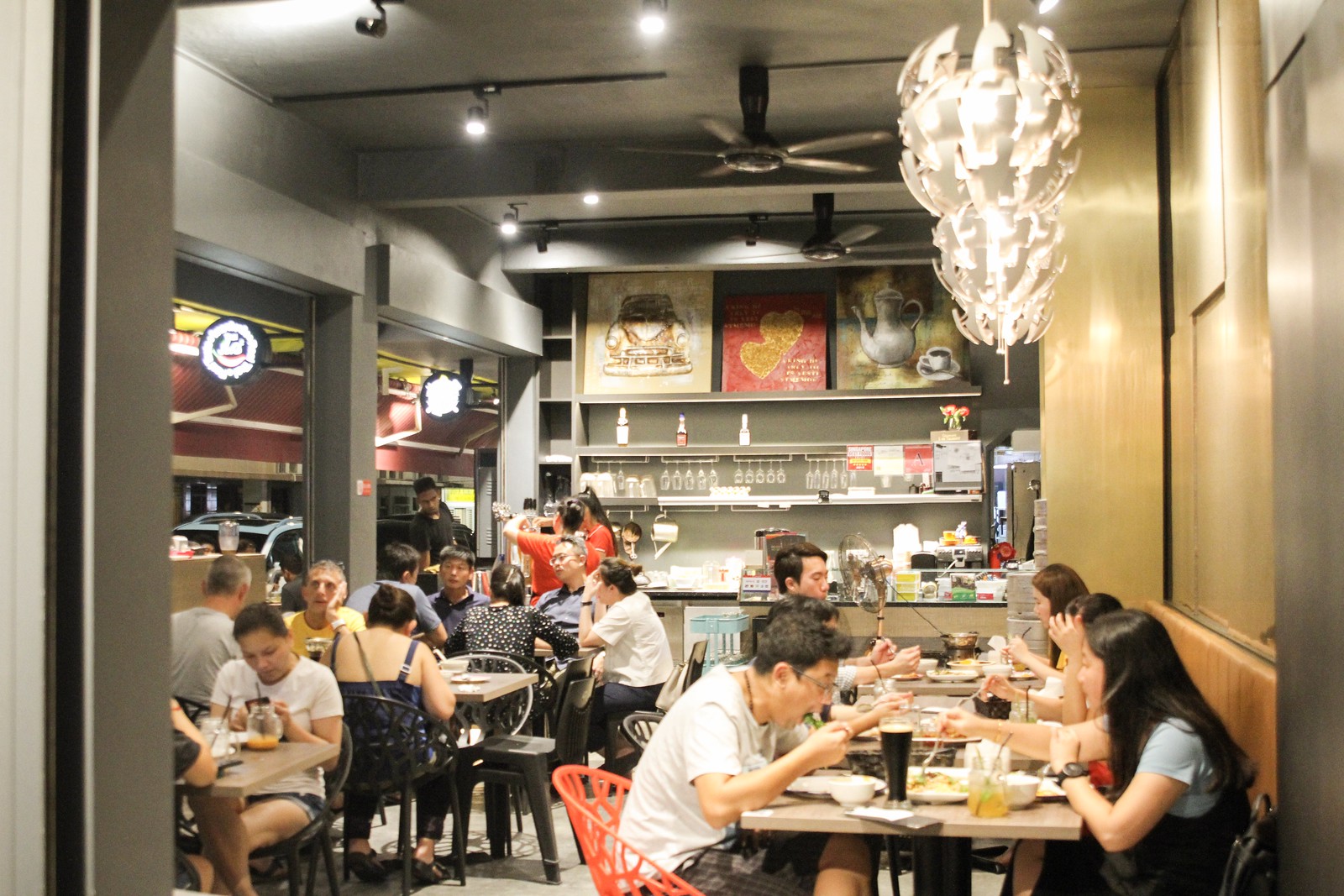 Penguin’s Kitchen has other dishes such as Grilled Pork Salad ($12) which, according to Pat, is a lot more popular amongst Thais, and seldom considered by Singaporeans.

Let’s build a food community that helps to update the food news in Singapore! Simply comment below if there’s any changes or additional info to Penguin’s Kitchen. We will verify and update from our side. Thanks in advance!

As an aspiring writer with an insatiable appetite, Jonathan strives to explore and unravel the ways in which an inherent cultural diversity has contributed to the evolution of Singapore's culinary scene. He also loves to travel and eat his Bak Chor Mee with a mixture of chilli and ketchup sauce.