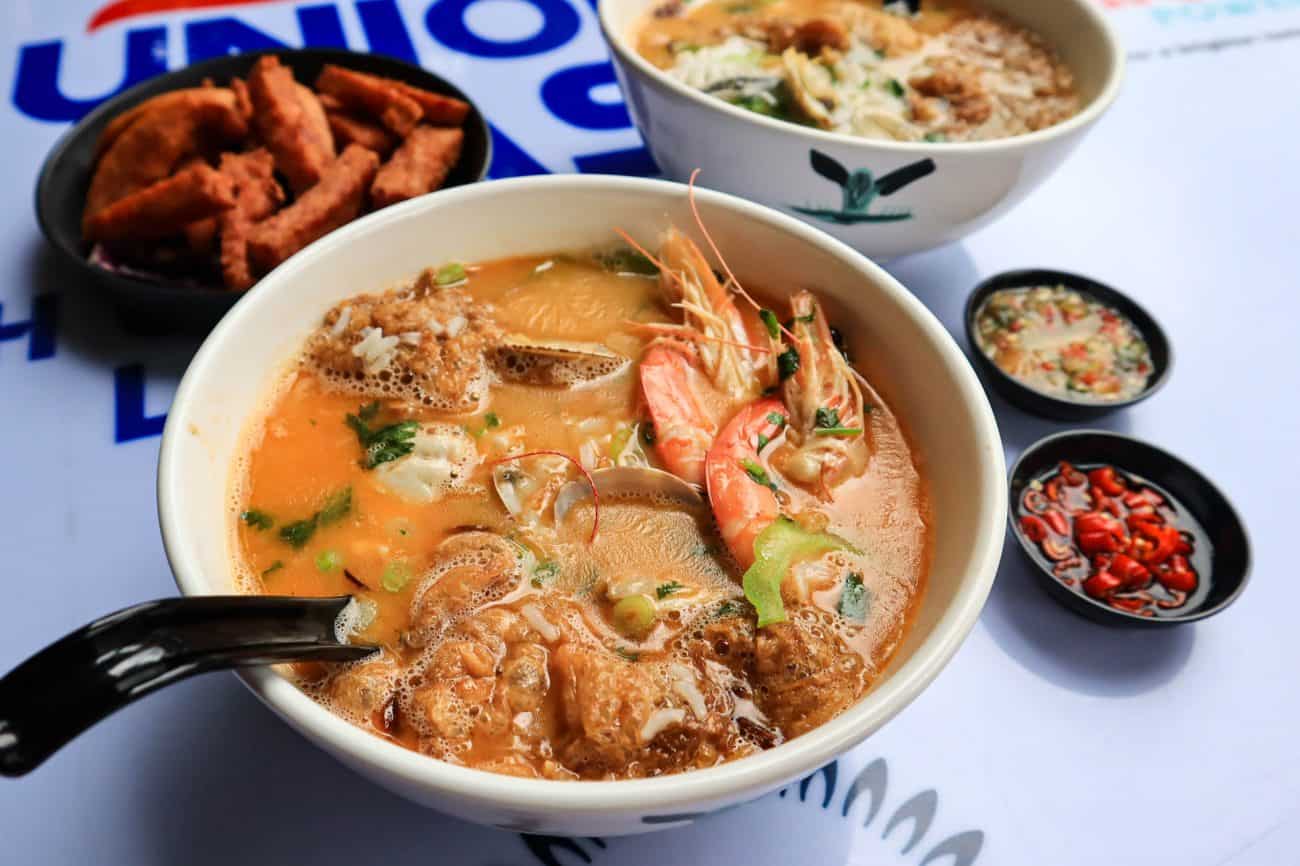 With stormy spells being an increasingly common occurrence as we enter the monsoon season, it is not surprising to crave piping hot bowls of soup, warm porridge and rice. What if I tell you that you can have all these comfort foods in ONE wholesome bowl that’s prepared by an ex-Jumbo seafood chef, at just $6?

When we caught wind of San Pin Seafood Soup Pao Fan’s opening at Foch Road, we head over immediately. When we arrived at the coffee shop at 11am on a sleepy Monday (the stall opens at 10.45am), there was already a queue of approximately 10 people. 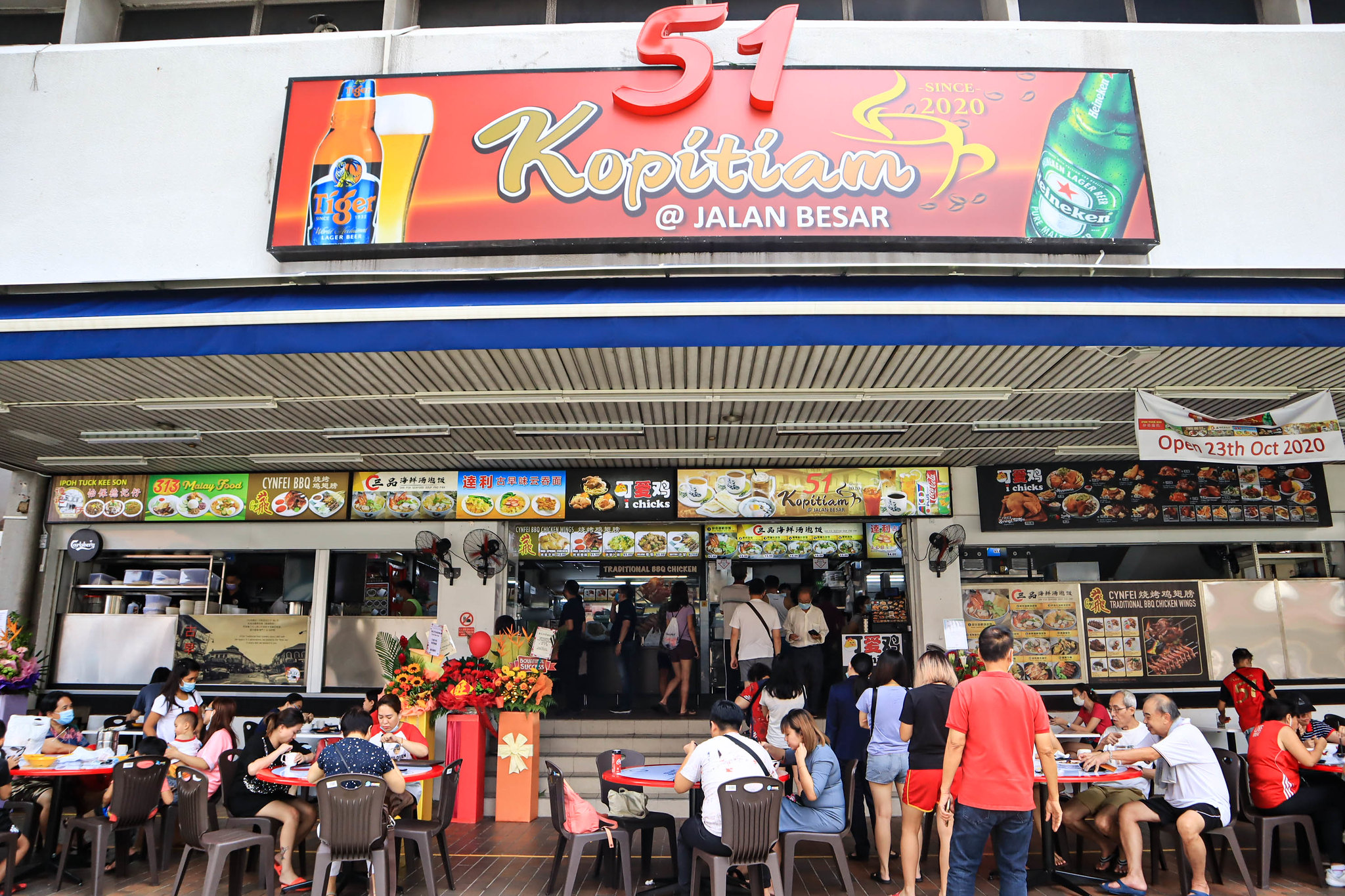 While most may know of mui fan (steamed rice topped with ingredients in a savory gravy) and porridge, less may be familiar with its rice-based counterpart, pao fan. Translating literally to “submerged rice”, pao fan consists of rice grains that are first steamed, then steeped in a savory seafood broth and finished with a generous sprinkling of crunchy fried rice puffs.

Preparation of the broth usually involves simmering generous amounts of crustaceans and pork bones, and the unique textural contrasts of the different components and cooking methods involved makes pao fan a tedious dish to whip up. Hence, pao fan is usually found at higher-end seafood or Chinese restaurants.

You May Also Like
Enjoy Your Favorite Starbucks Holiday Coffees At Home This Christmas With The First Ever Starbucks At Home Holiday Favourites! 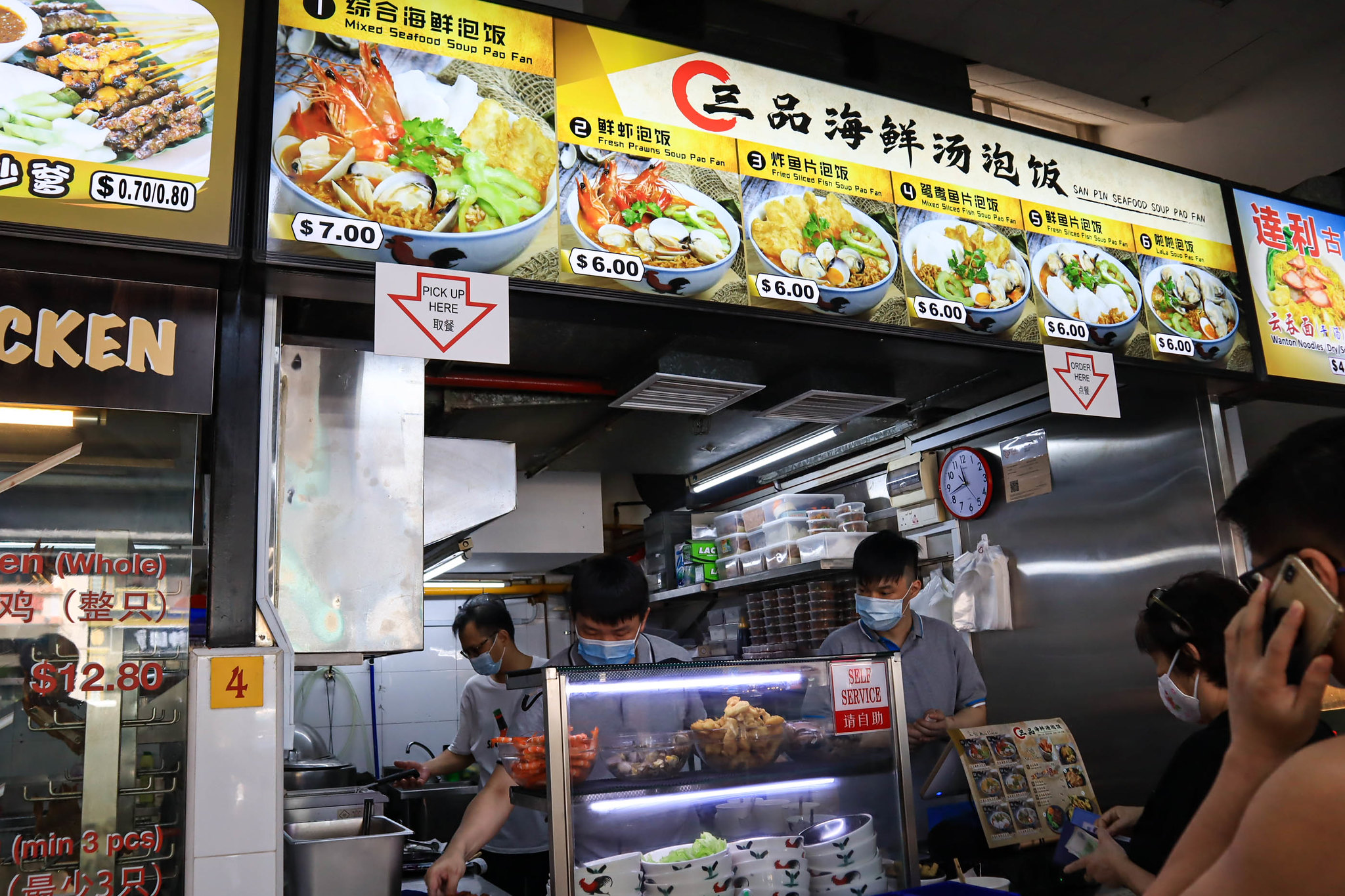 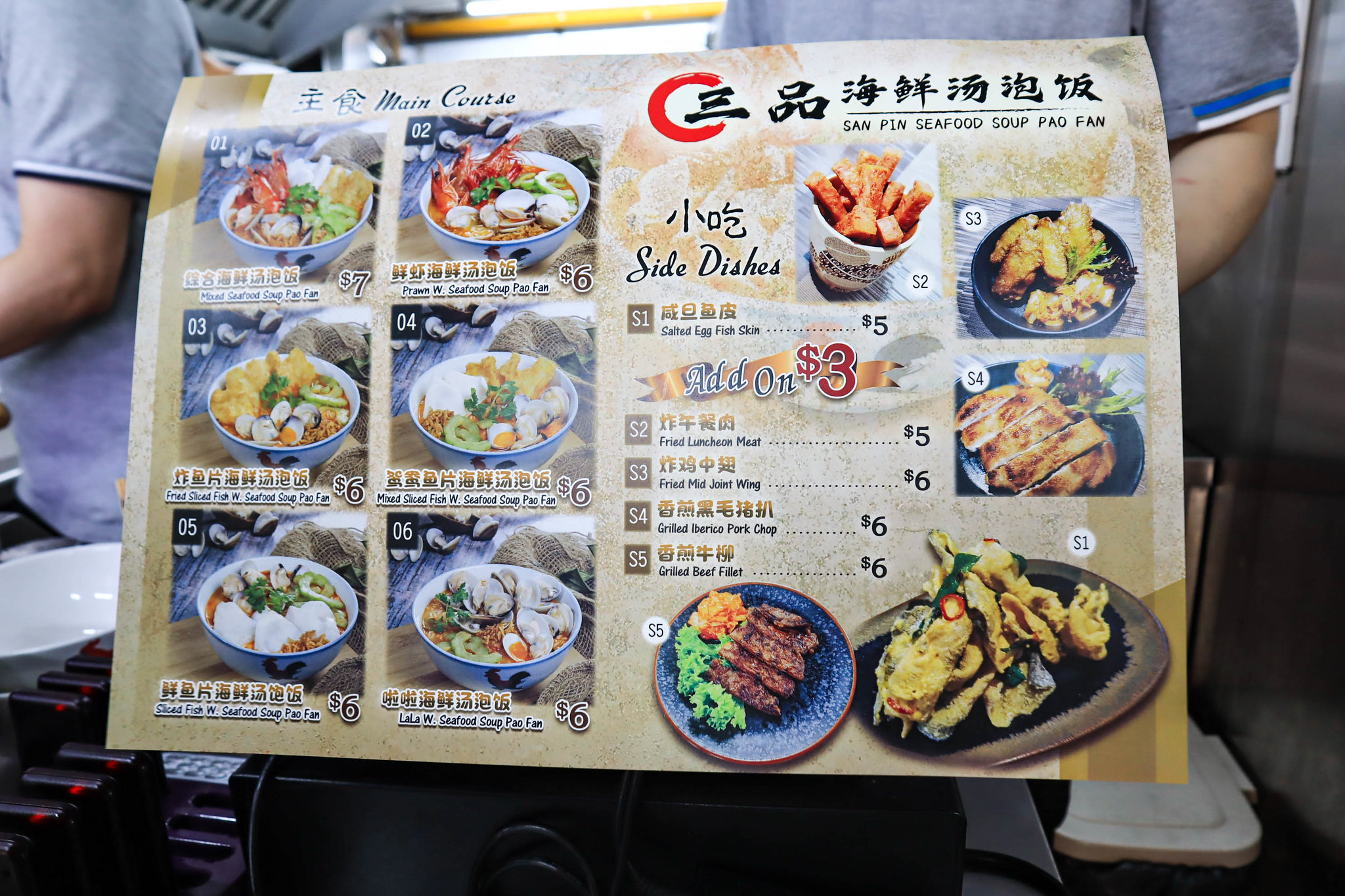 The menu was straightforward with 5 side dishes and 6 variants of pao fan : prawns, fried sliced fish, fresh sliced fish, mixed sliced fish, lala or the mixed bowl which comes with everything. Do note that all pao fans come with lala, bitter gourd and fried egg floss, so don’t forget to inform the staff if you don’t want any of them! You wouldn’t want to omit any one of them though, trust us.

Although they have only opened for slightly over a week, they have a great flow when it comes to operations. There were 3 staff hustling in the stall: one in-charge of taking the orders and payment, one main cook dishing out the bowls, and another staff preparing the side dishes. Upon ordering your food, a buzzer will be given to you. 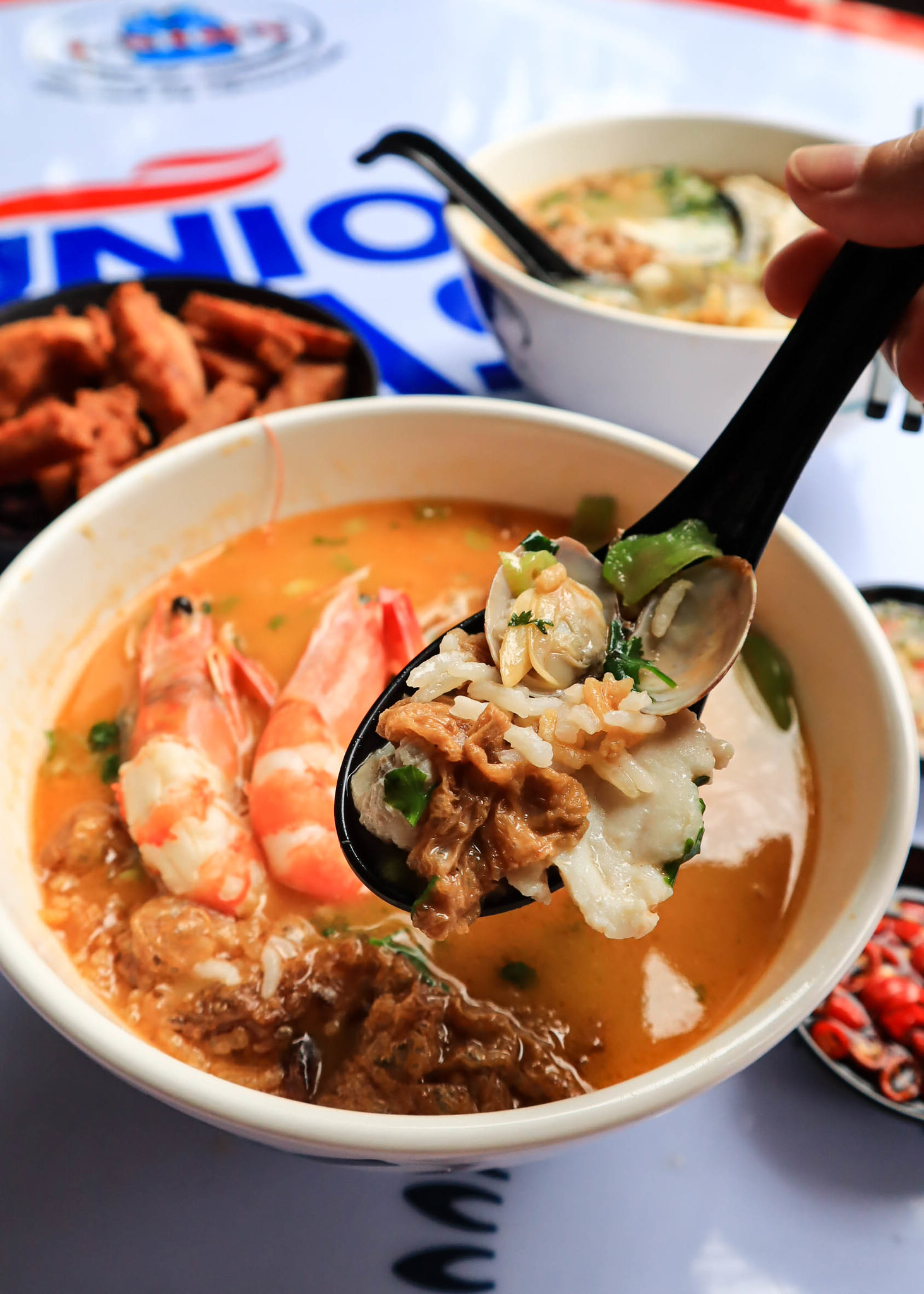 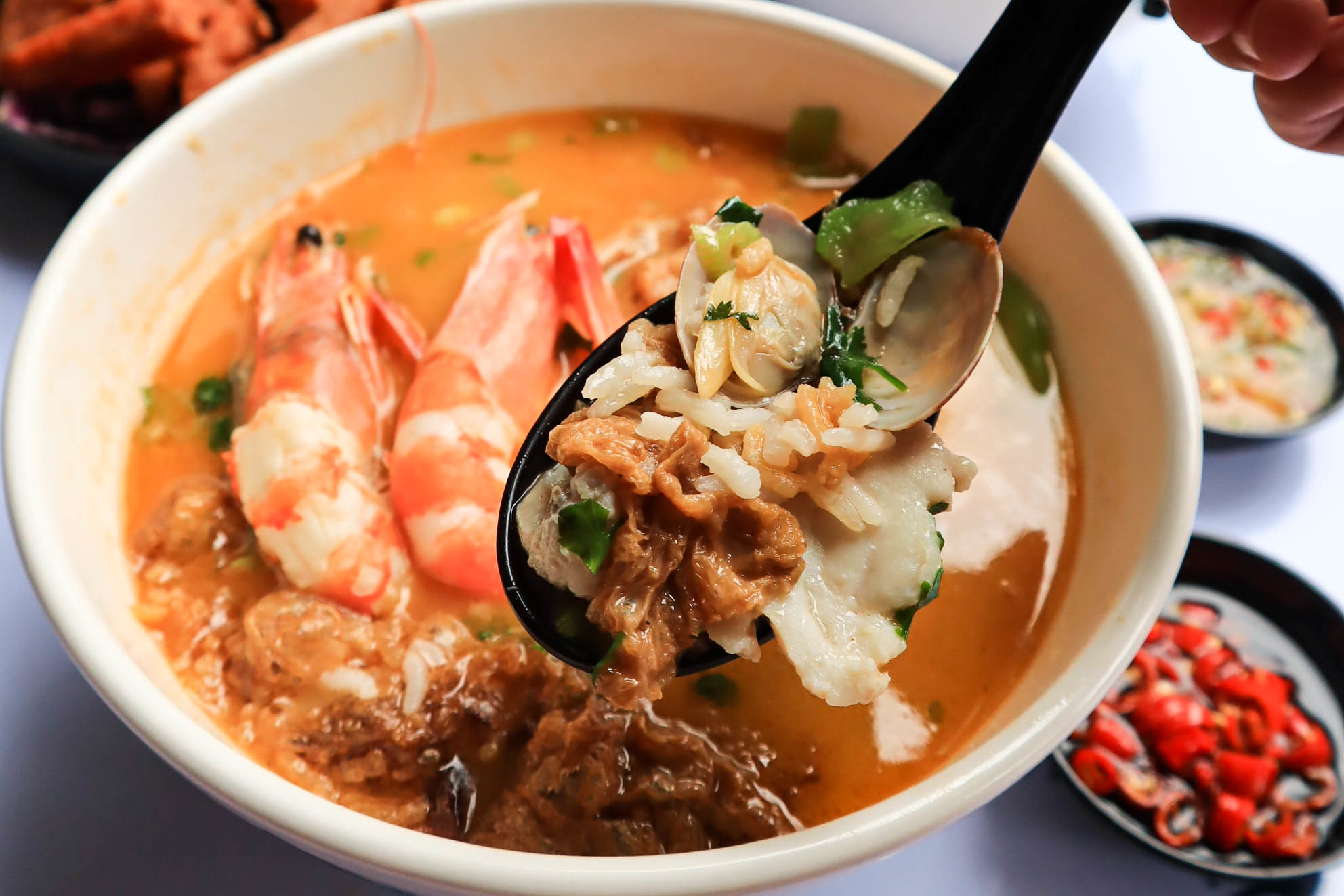 Highly recommended by their staff, the signature Mixed Seafood Soup Pao Fan ($7) arrived in an orange-hued broth with 2 big prawns, fresh and fried fish slices, lala, bitter gourd and fried egg floss. An indeed impressive line-up of fresh seafood for its economical price tag. The umami-rich seafood broth was laced with the briny sweetness of lala and sea prawns. Each rice grain was beautifully puffed up from soaking in the full-bodied broth, and we enjoyed the crunch from the crispy bits of strewn rice puffs.

You May Also Like
Just Sarawak Laksa - Not Just Laksa, There is Kolo Mee Too! 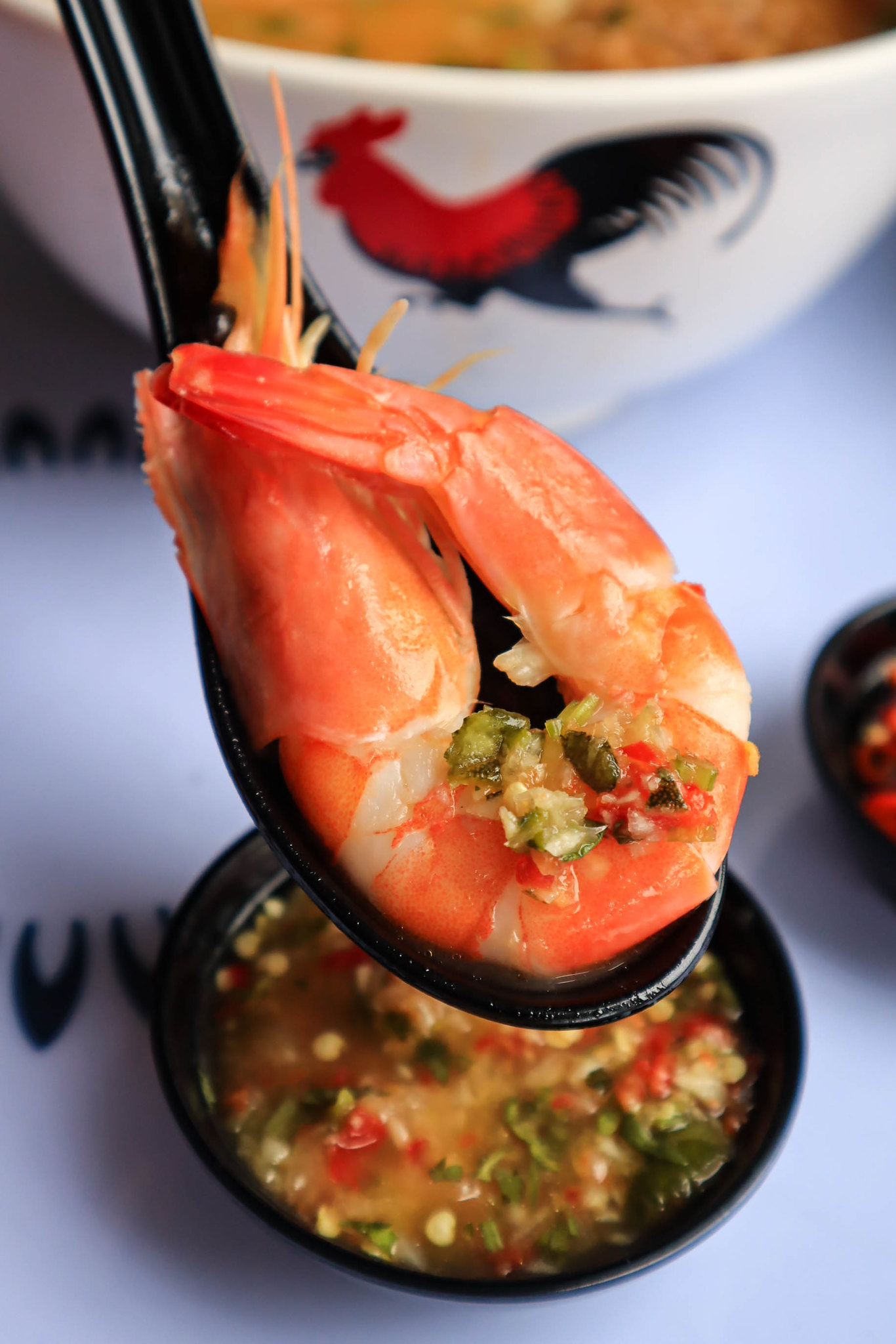 Dip the perfectly cooked seafood into their spicy and tangy homemade chill which will leave you craving for more. Now, can we just take a moment to marvel at how fresh and big that prawn is? It is also noteworthy that each prawn has been painstakingly deshelled with only their tails and heads left for all you folks out there who love your prawns but abhor peeling them. 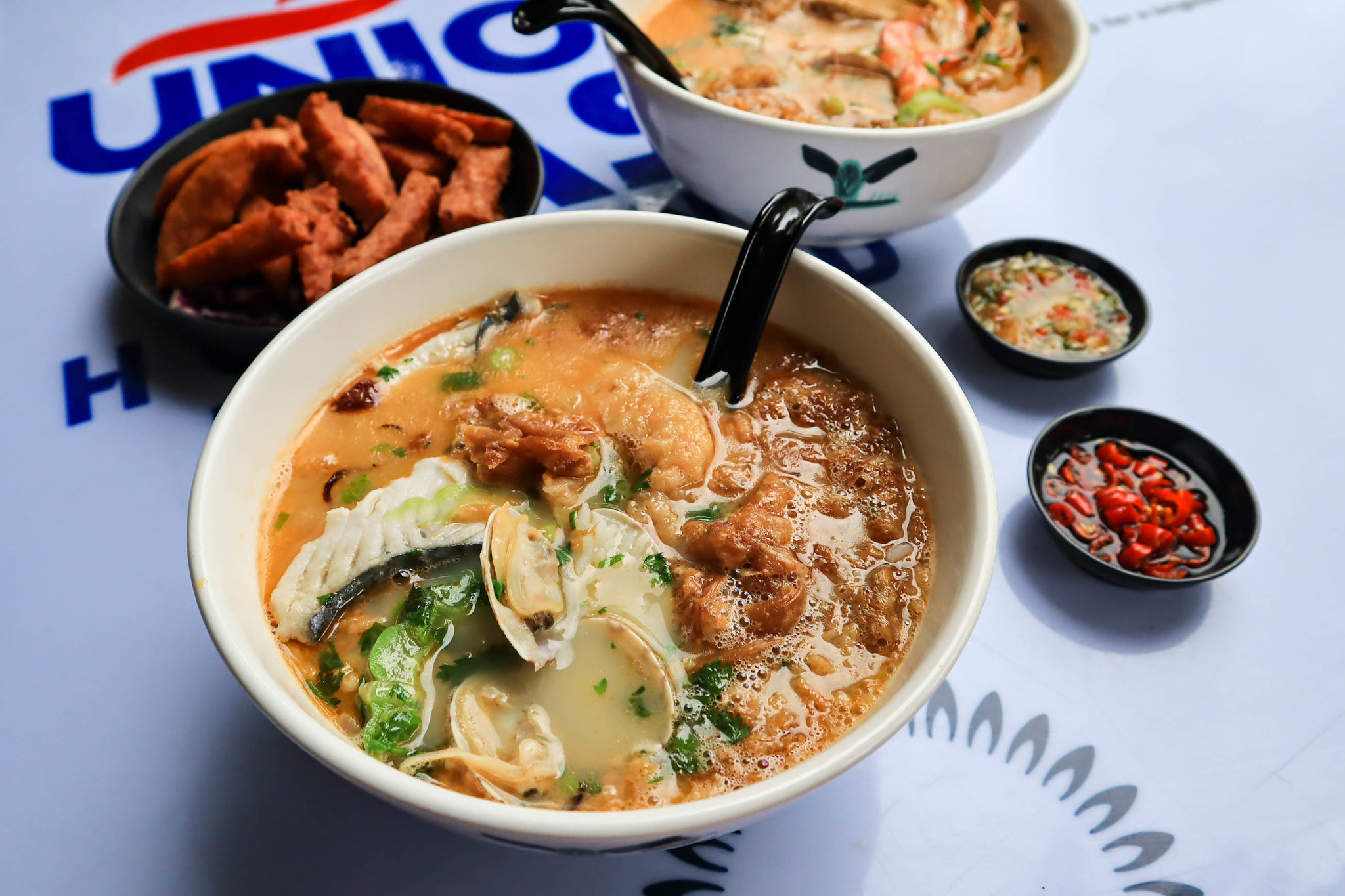 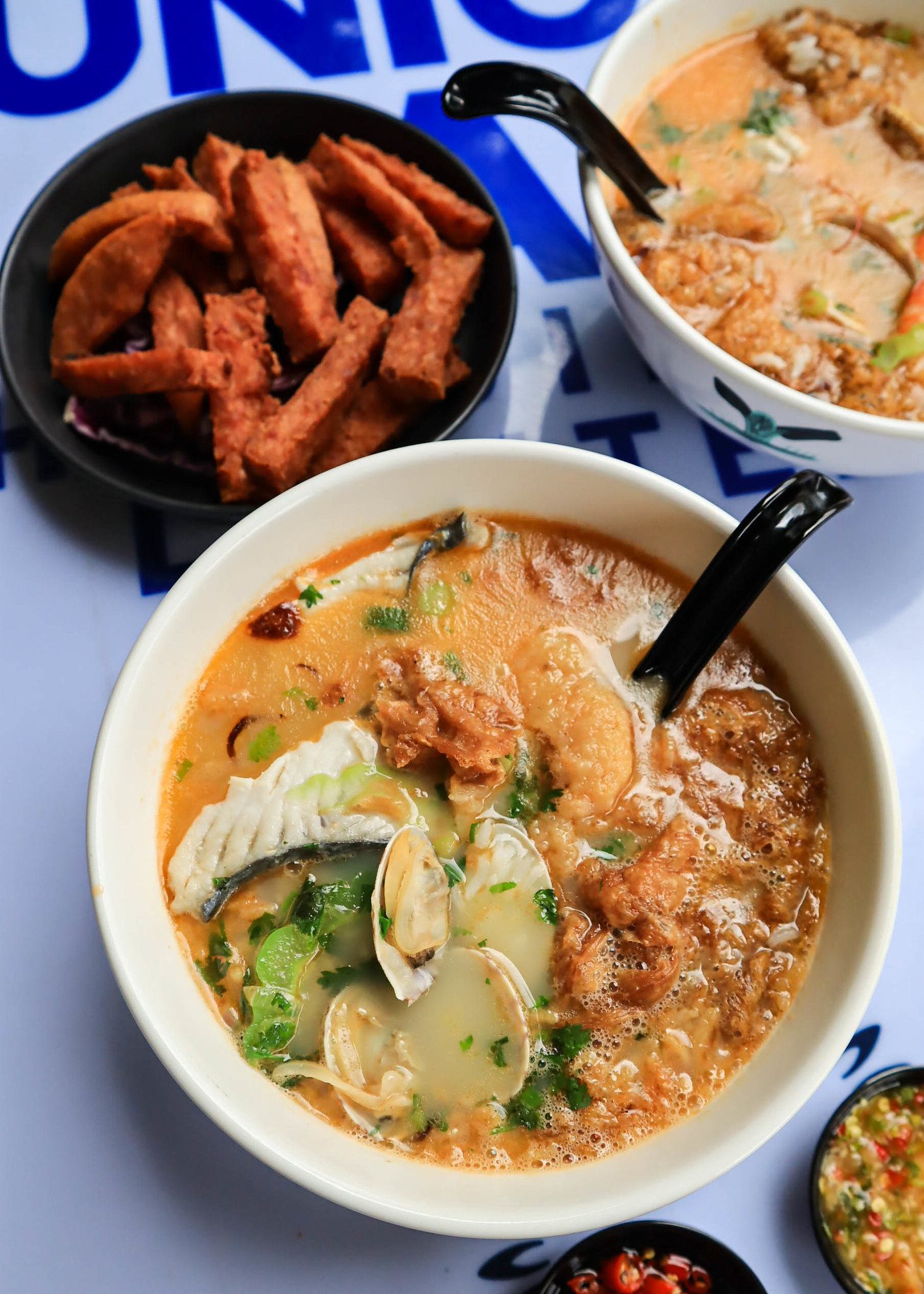 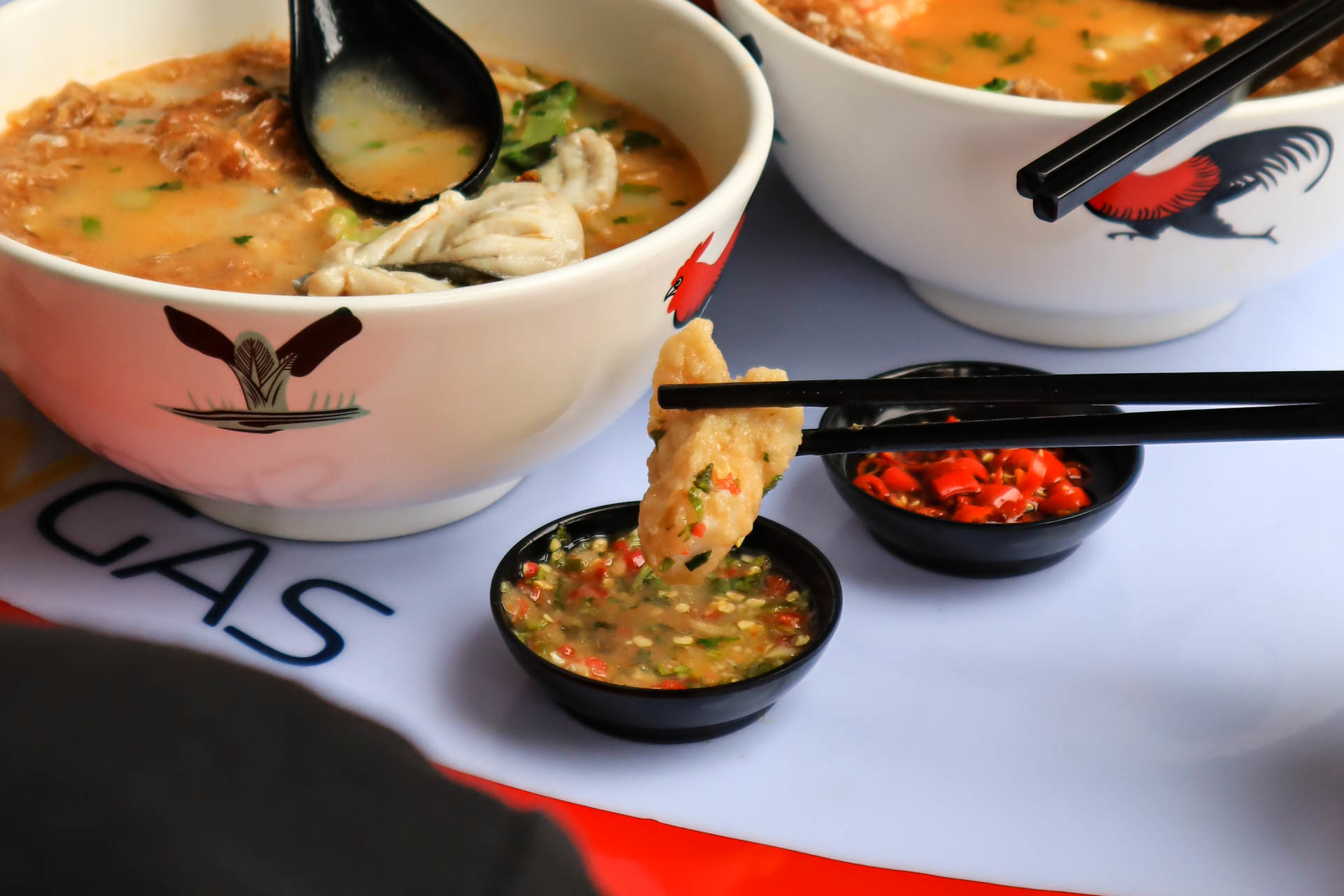 To make our earlier wait in the queue worth it, we also got another bowl of Mixed Sliced Fish with Seafood Soup Pao Fan ($6). The generous slices of thick Batang (mackerel) fish, which were succulent and firm to the bite, left a lingering sweetness. The fried fish slices retained their crisp despite being drenched in the savory broth. And oh, who can forget that crowd-favorite fried egg floss which soaked up the zesty savory concoction? 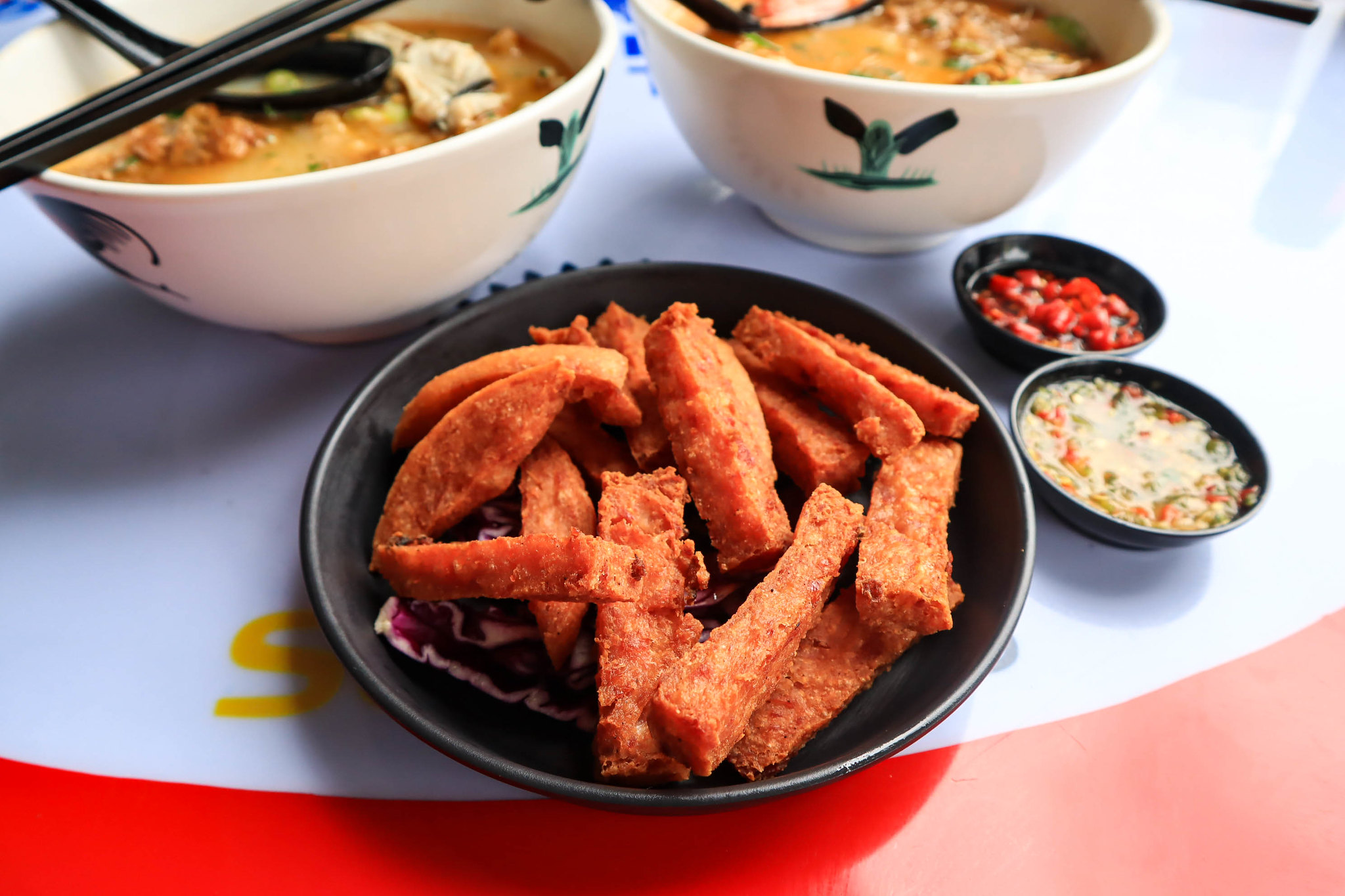 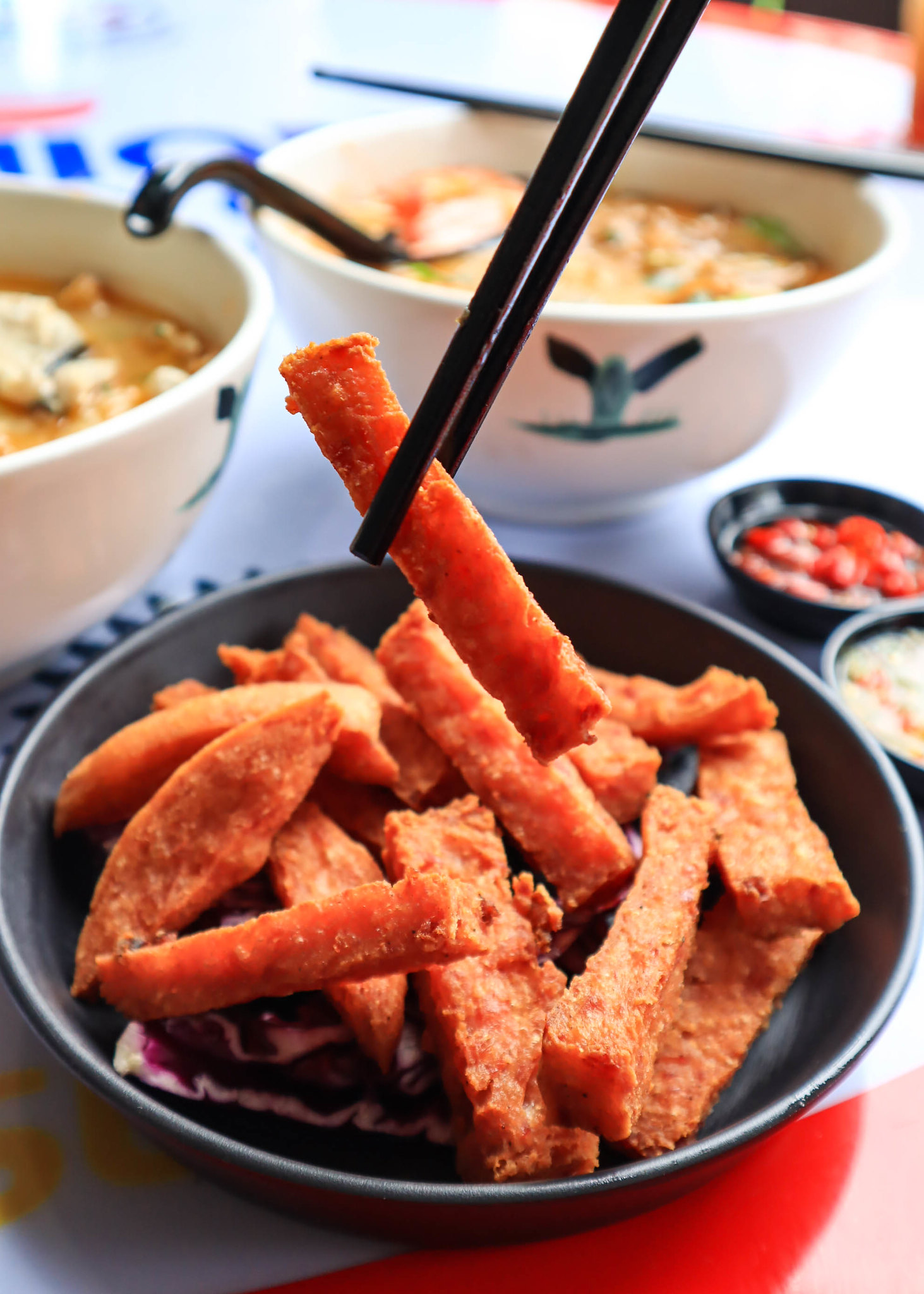 Although it was only slightly past the half-hour mark of their opening time when we placed our orders, their unique Grilled Iberico Pork Chop ($6) and Grilled Beef Fillet ($6) sides were already sold out (say what!). According to the staff, they were not expecting such big crowds, hence limited portions were available. We thus settled for the next most recommended Fried Luncheon Meat ($5). 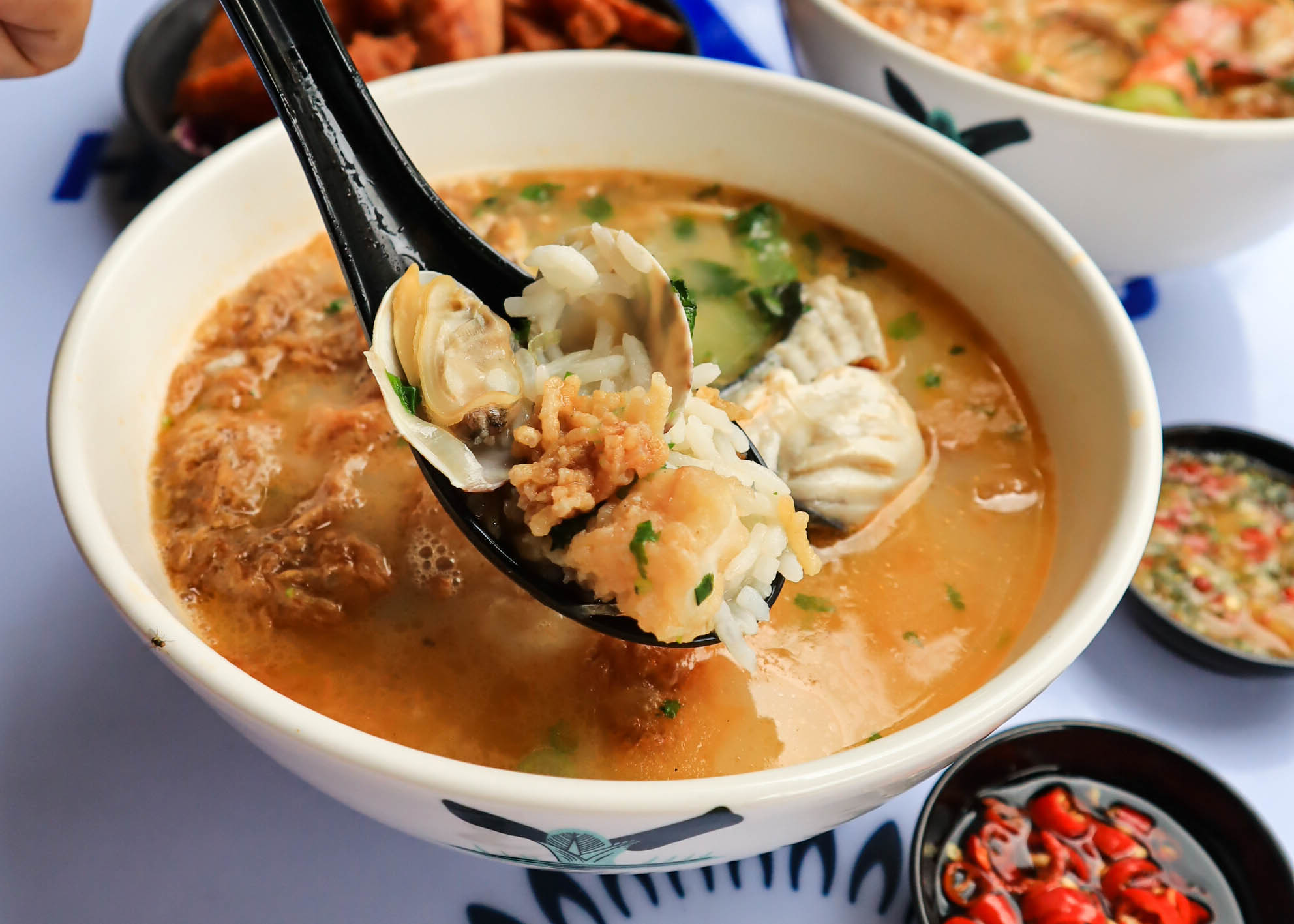 If you are craving for a rich yet affordable bowl of seafood heaven prepared by pro chefs, San Pin Seafood Soup Pao Fan is the place you have got to visit. They also have another outlet at China Square Food Center if you are in the CBD, but note that the operating hours for both outlets are different.