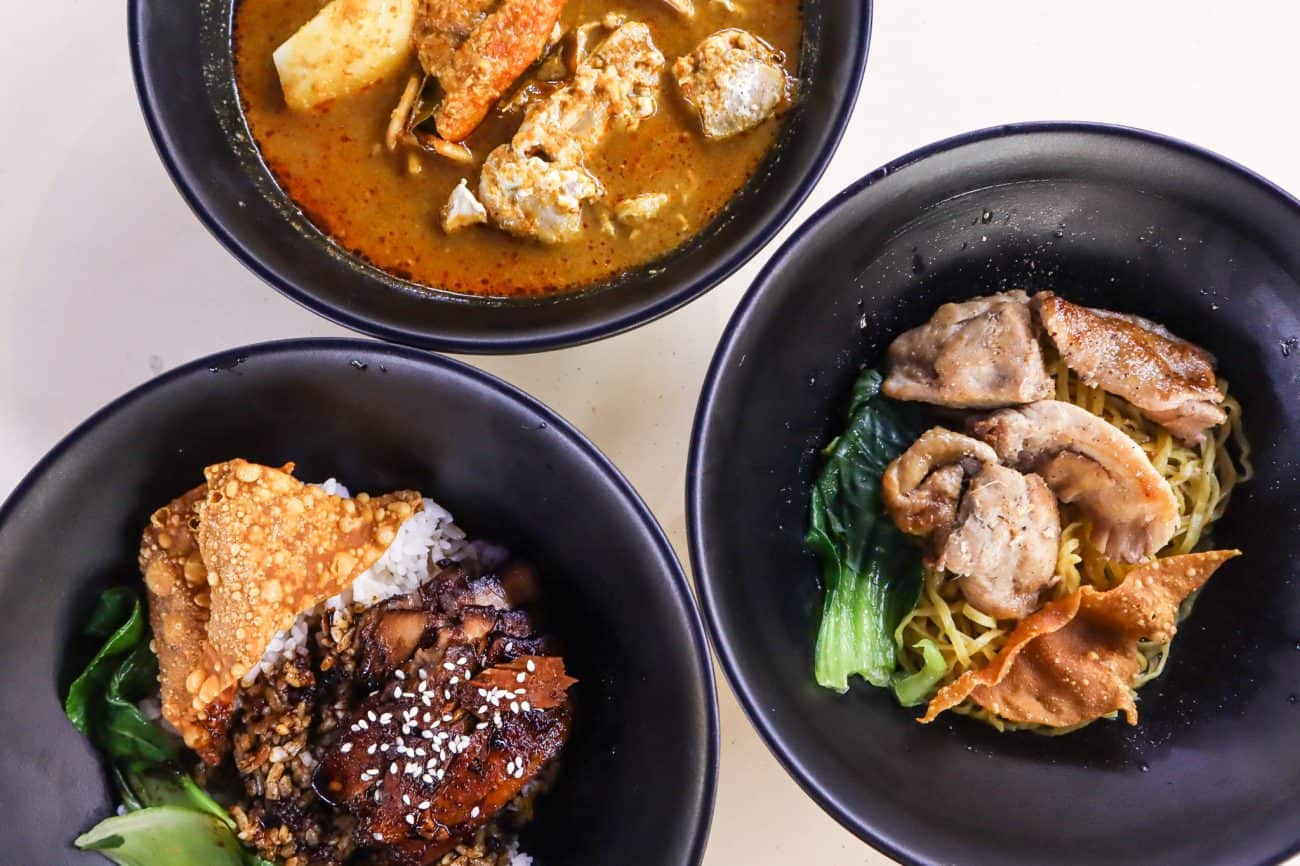 Pork belly is always best when it melts in your mouth, so when I saw a relatively new stall in Bishan promising exactly that, of course I headed down to try it! Hidden in a quiet coffee shop on Bishan Street 11, Tai Zi 太子 is famously known in KL for their luscious pork belly. They have now made themselves a known name in Singapore too, after opening their first outlet in Ang Mo Kio. 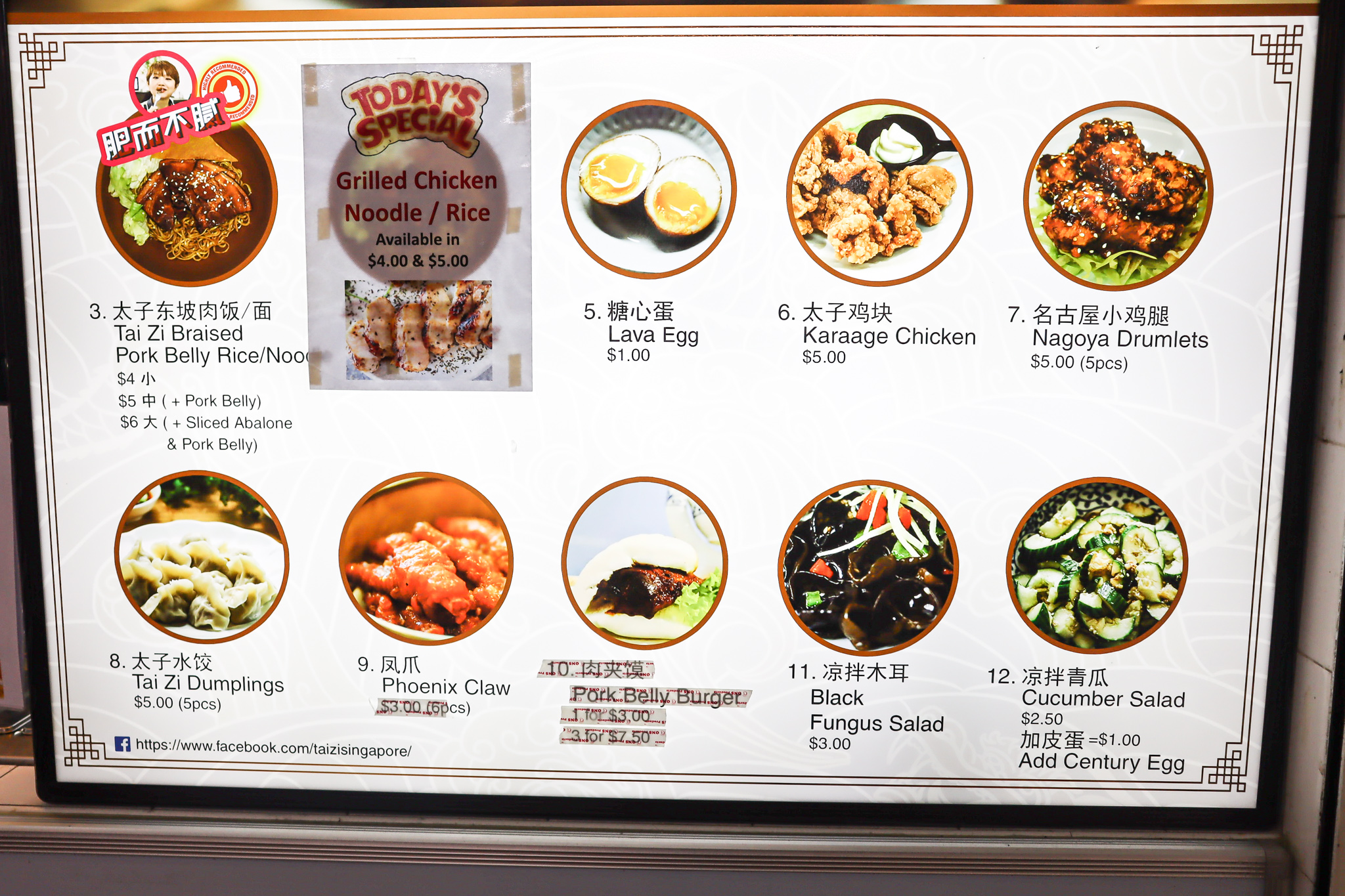 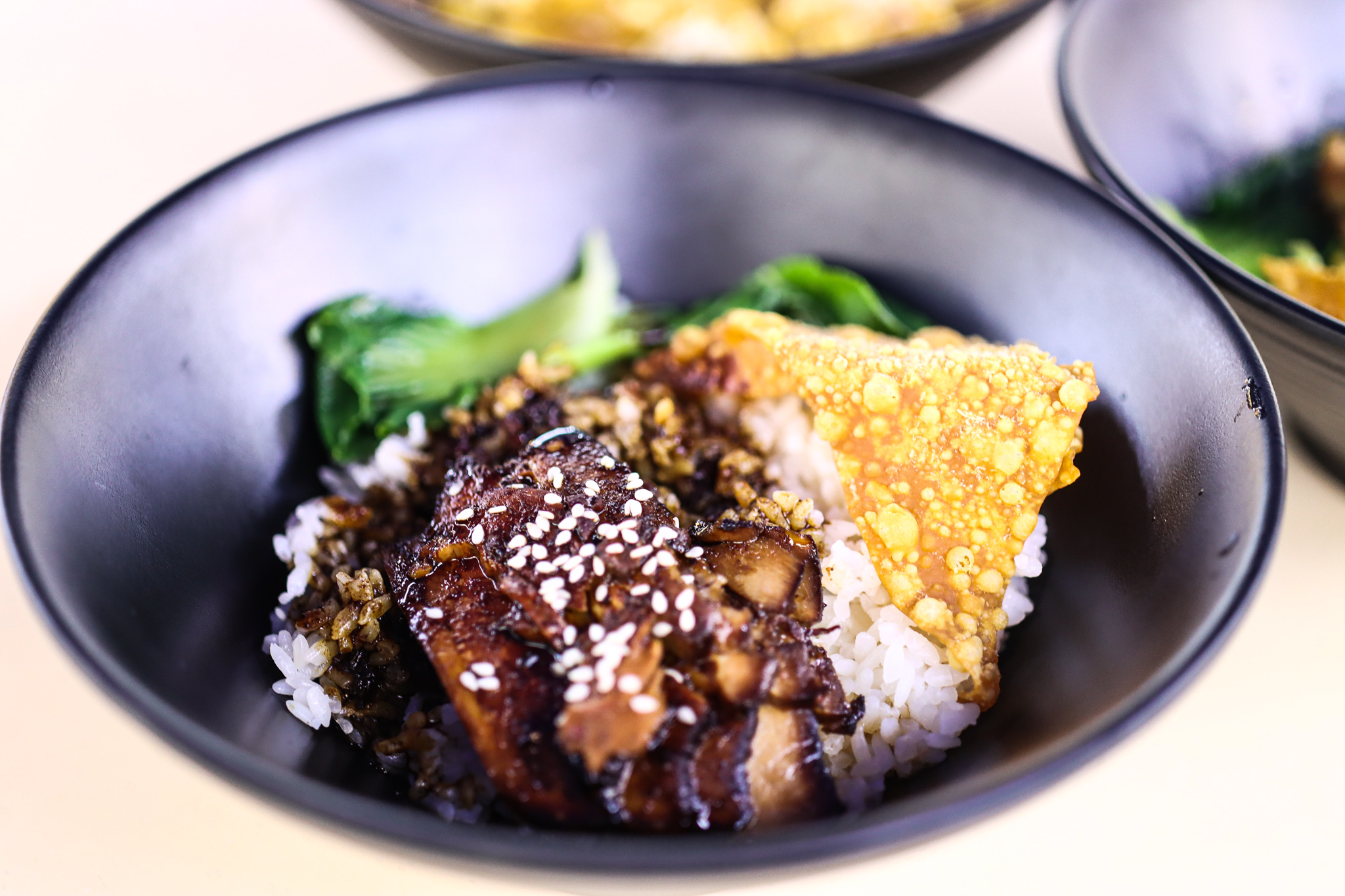 Unlike your typical lu rou fan, the Tai Zi Braised Pork Belly Rice ($4/5/6) was more similar to a butadon (pork donburi). Instead of braised pork chunks, atop the white rice drizzled in dark sauce were thin slices of pork belly, with a side of greens and a fried wanton skin. 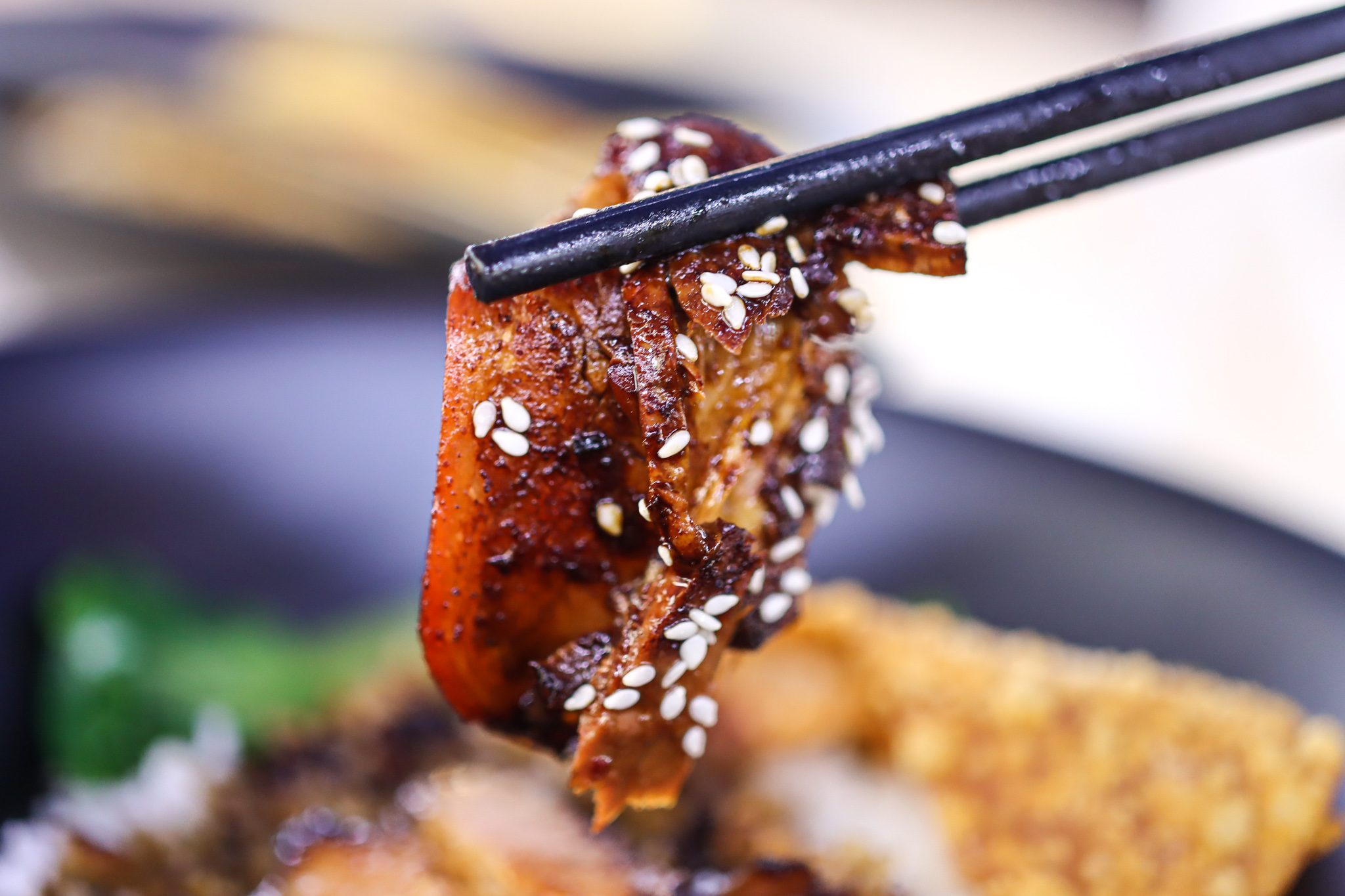 Braised with a dark sweet sauce, the pork belly slices were certainly the type to melt in your mouth due to how thin they were. But because of that, it was hard to fully appreciate the meat and fat. It was also slightly bitter due to the vinegar used. I would say this suits those with an acquired taste for it as I prefer a more savoury braised sauce. 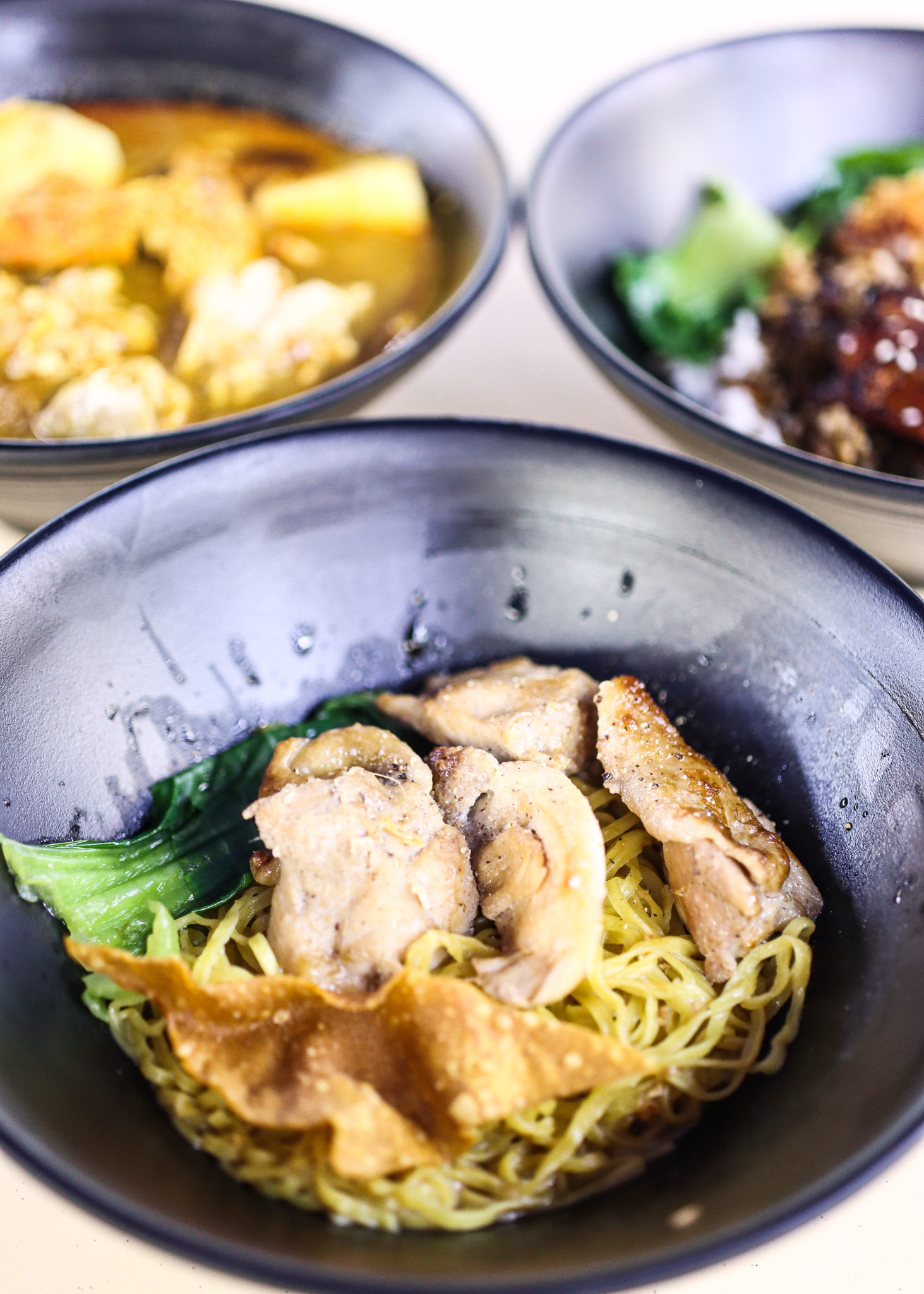 I asked for another recommendation from the stall owner and my attention was directed to the Grilled Chicken Noodles ($4/5). A very simple presentation of thin meepok-style noods, chicken, vegetables and a fried wanton skin, but the aroma it emitted was quite fragrant. 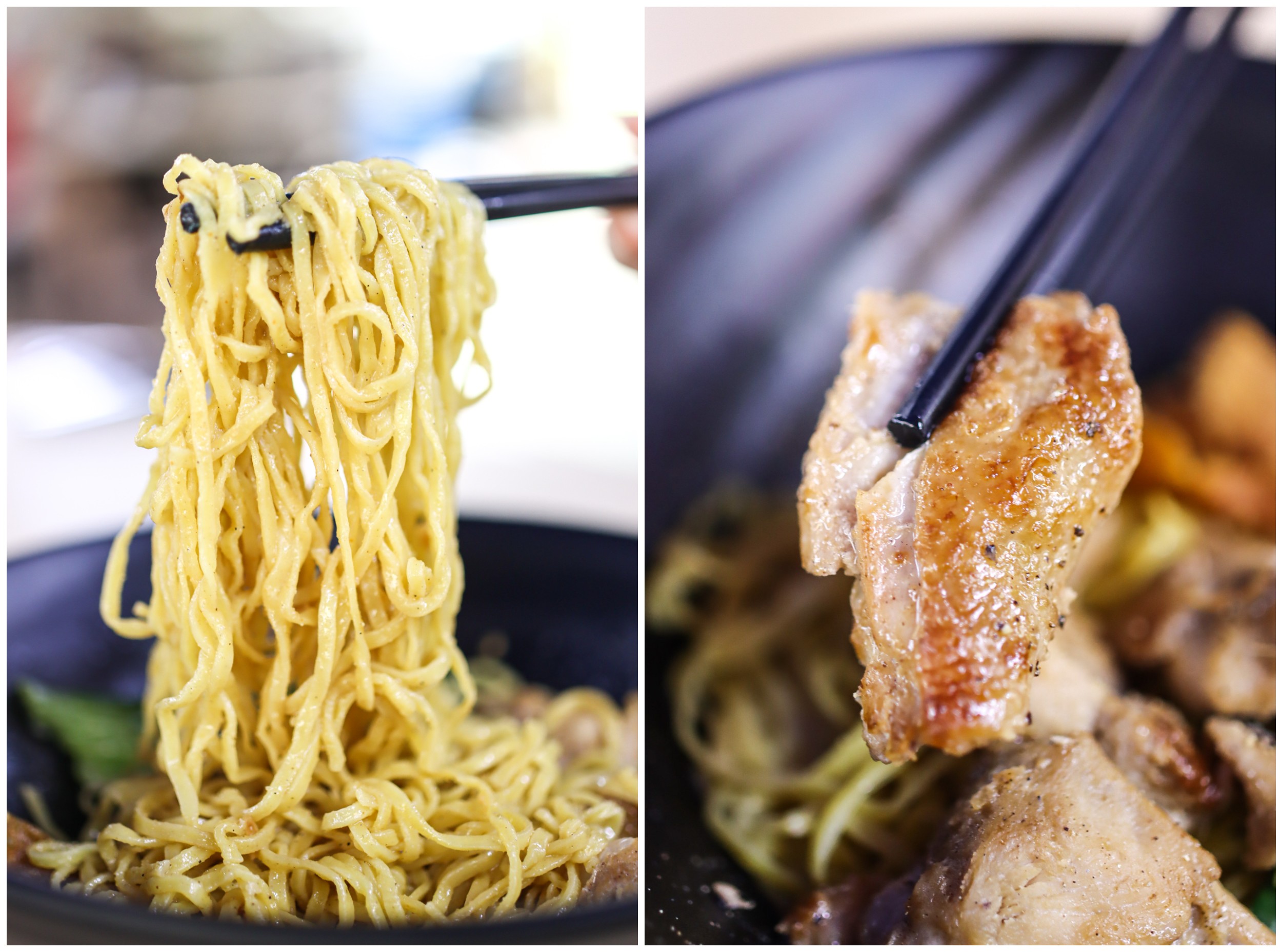 There wasn’t much sauce for this dish so it was a bit on the dry side. The noodles, however, were seasoned quite well with a savoury and slightly peppery taste to them. Apart from the occasional, unfortunate gristle I bit into, the grilled chicken was marinated well but was also a tad too dry. 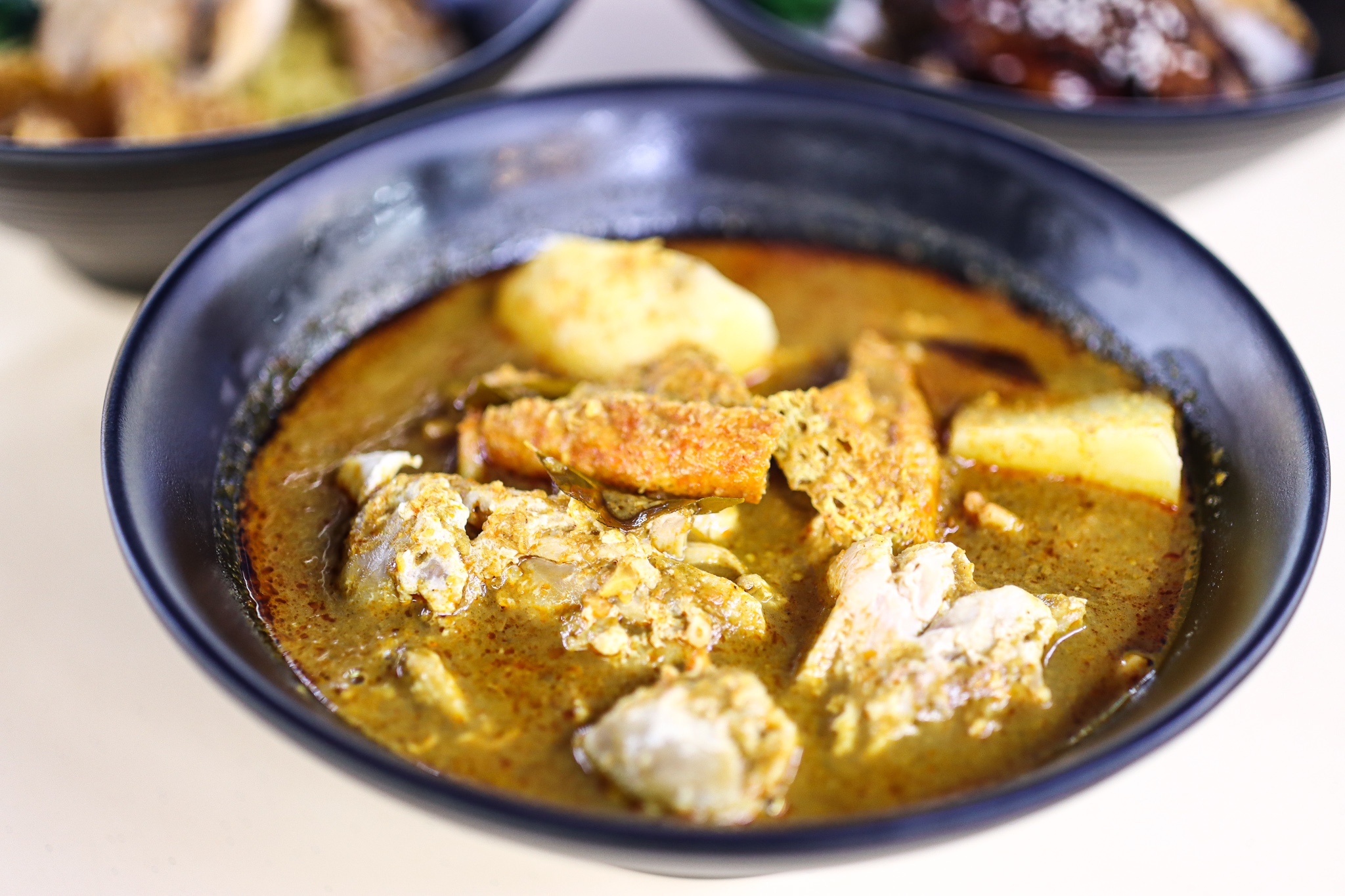 Only available at the Bishan branch, the Curry Chicken Noodles ($5/7) had a very enticing aroma that had my mouth watering. The bowl came laden with chicken, tau pok and potato, and only has limited servings available from 10am. 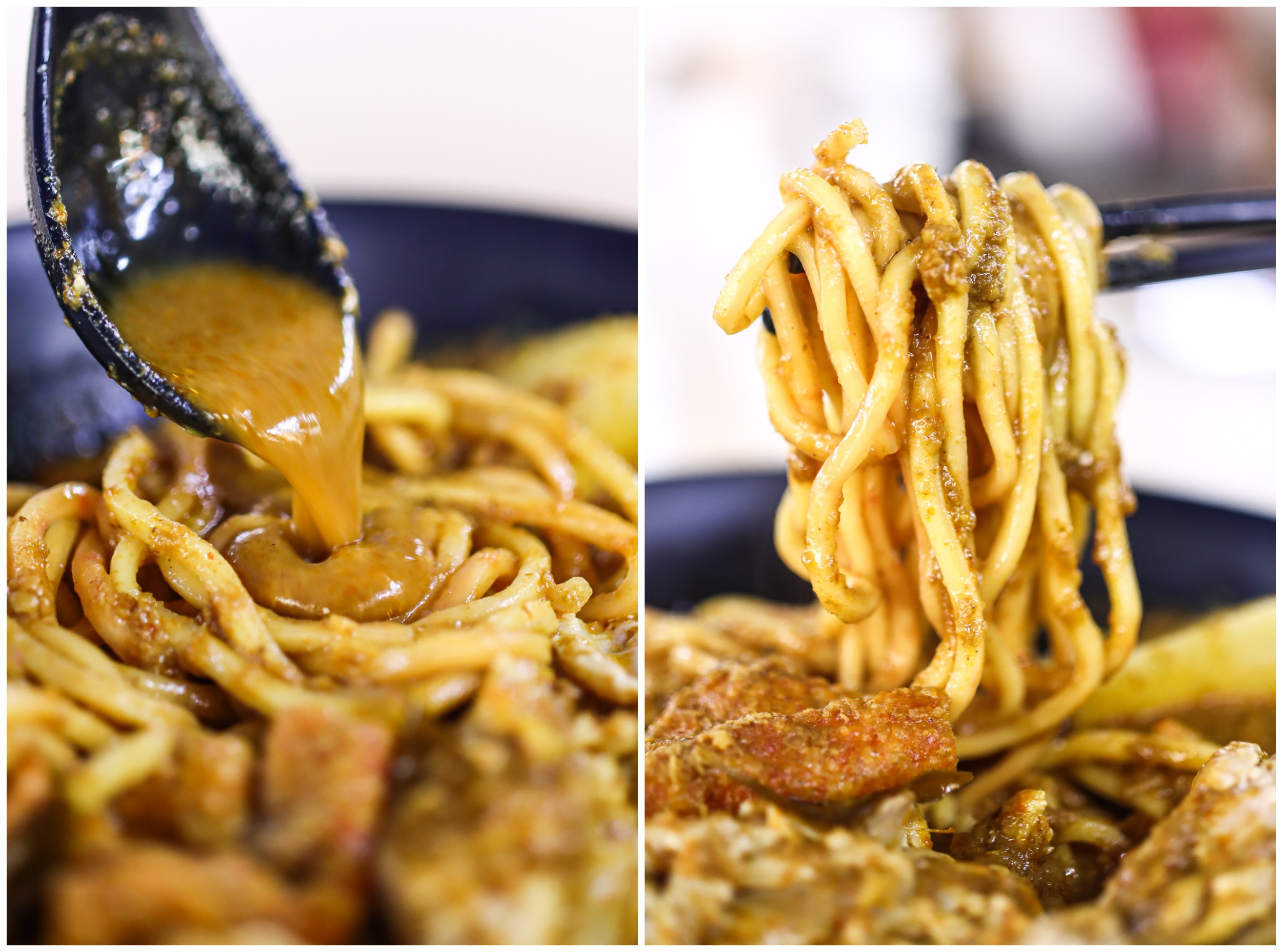 The consistency of the curry roux was neither too gao (thick) or watery and while it had the right amount of spices to give it a decent kick, there wasn’t much of a depth to it, and there was an odd aftertaste as well. As for the yellow noodles, it had that alkaline taste that didn’t really work for me. 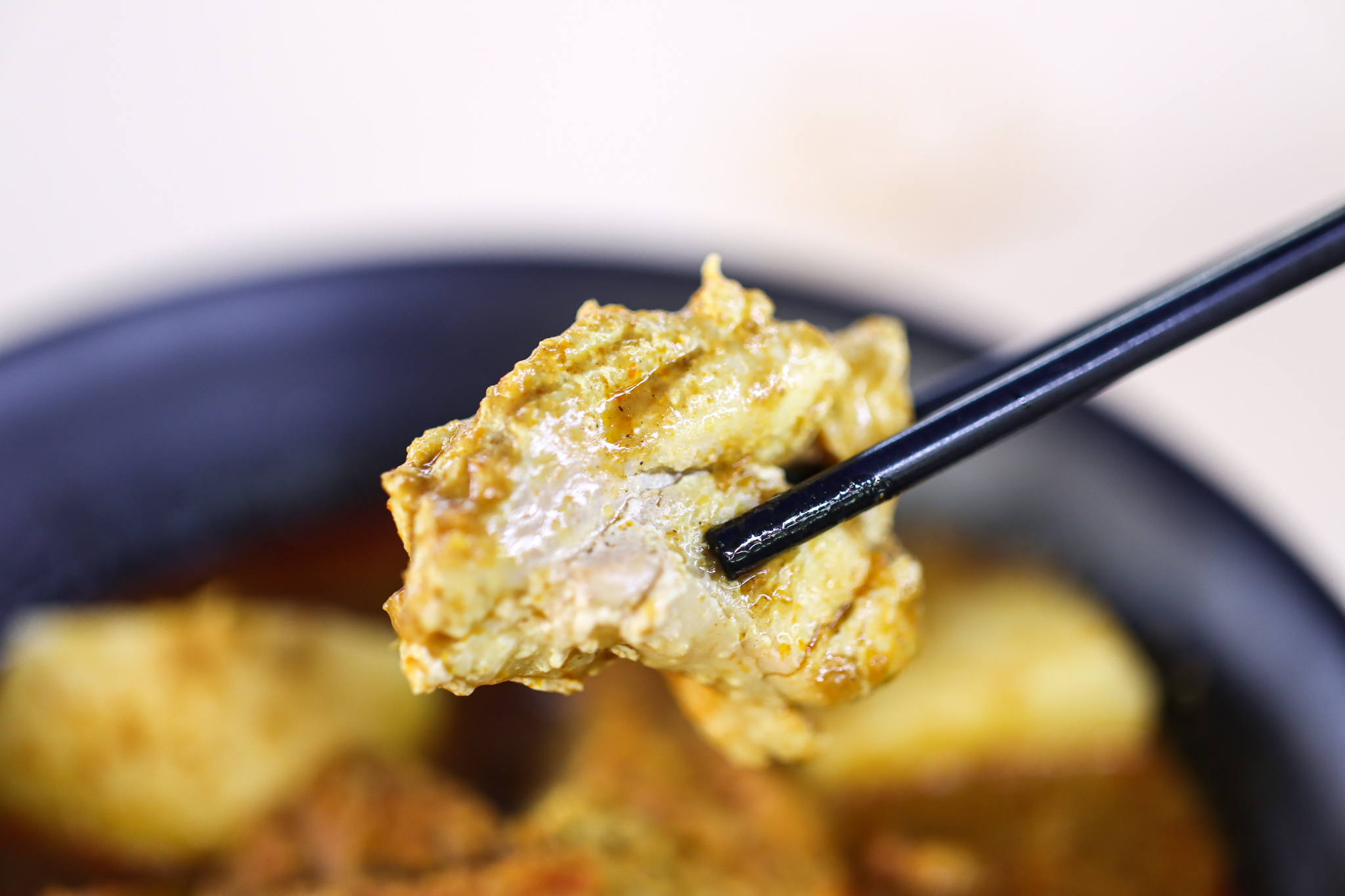 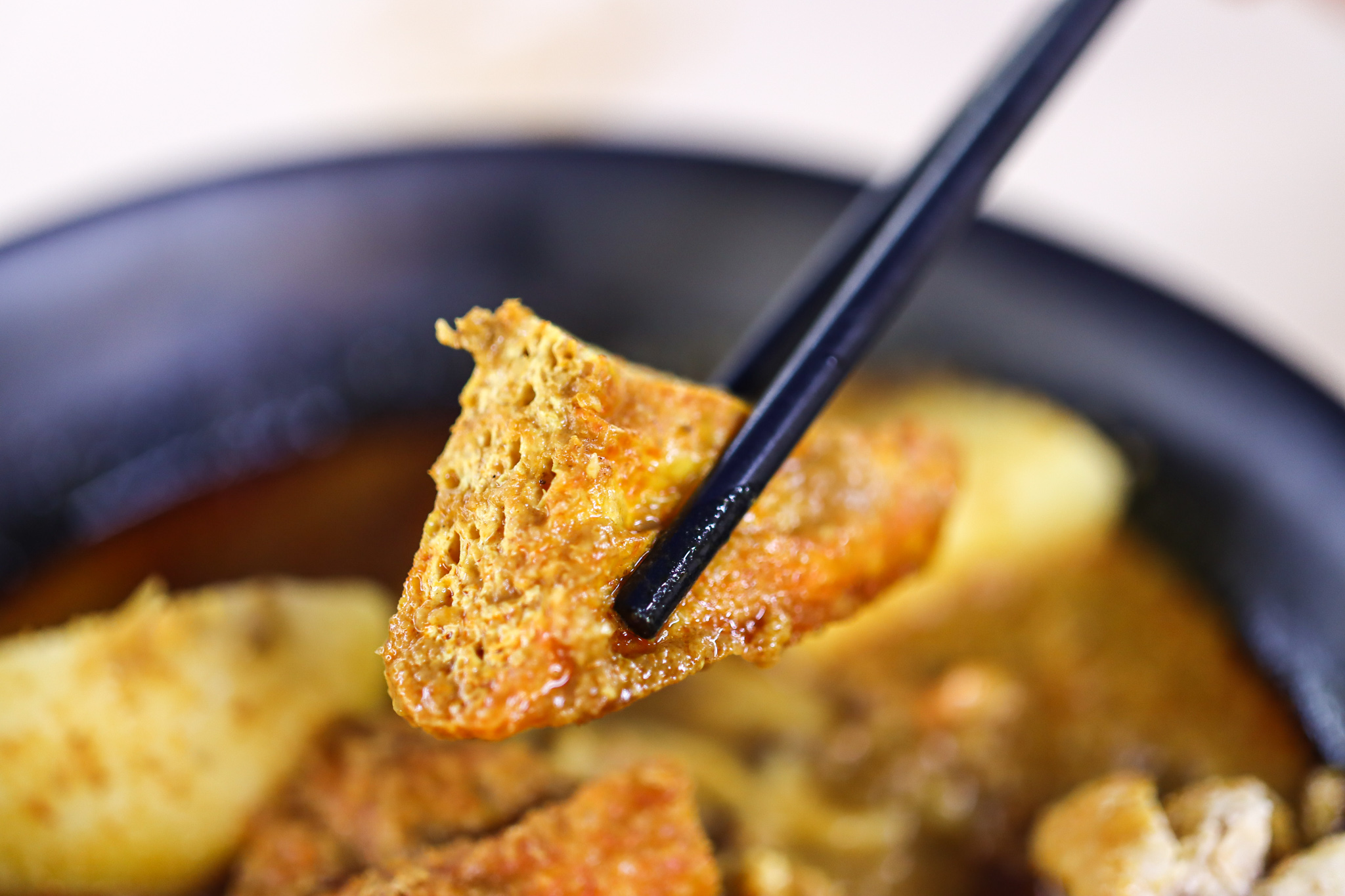 The taste of the chicken was extremely strong and was a bit off. Sadly, the tau pok was also quite mushy and didn’t manage to absorb the curry. It seems the potato was the only ingredient that fared well enough. 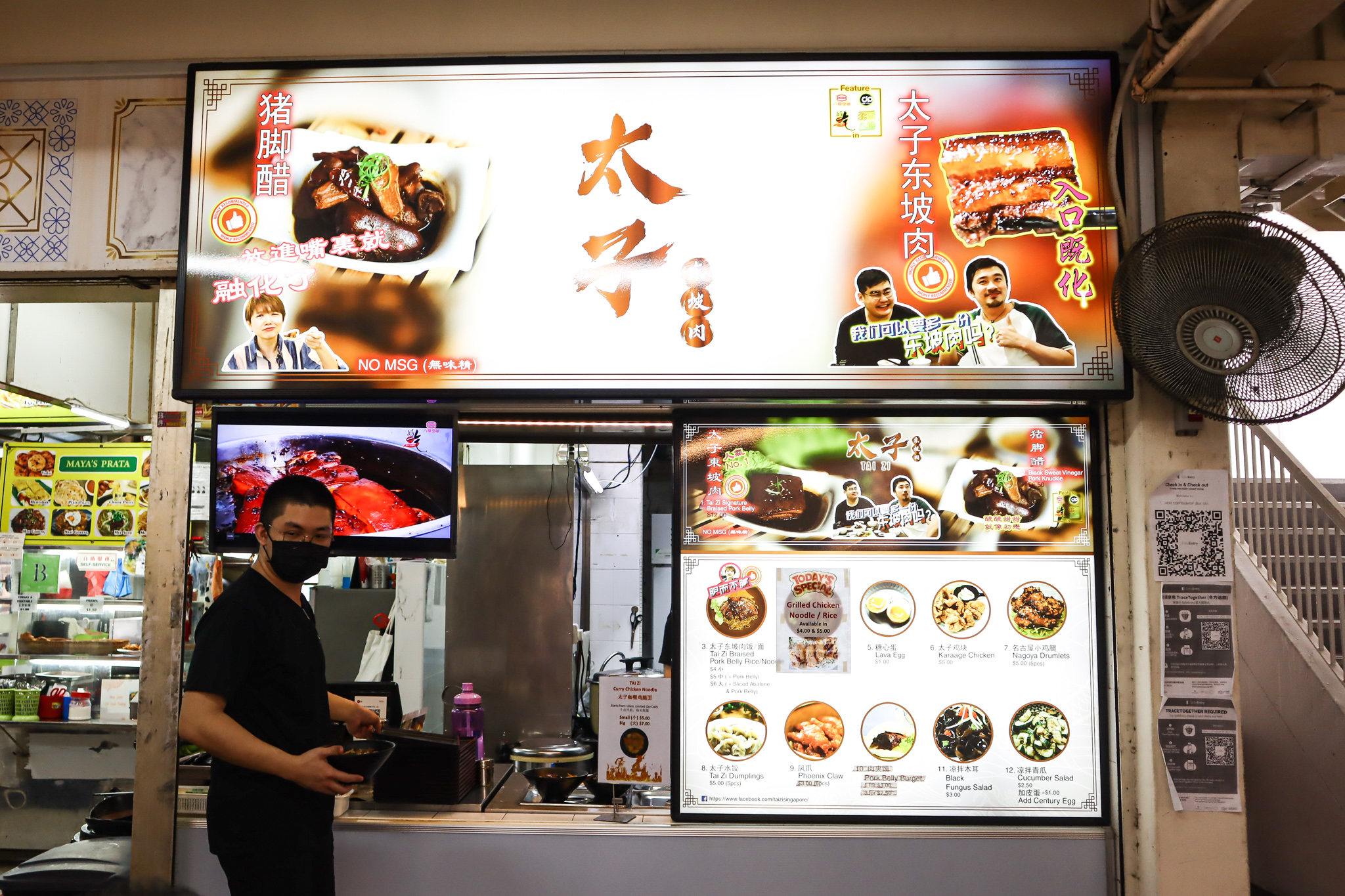 Perhaps they’re still ironing out the kinks. I have a feeling I should have gone for the hulking braised pork belly instead, so fingers crossed that it will be more of a success story.

Let’s build a food community that helps to update the food news in Singapore! Simply comment below if there’s any changes or additional info to Tai Zi 太子. We will verify and update from our side. Thanks in advance!