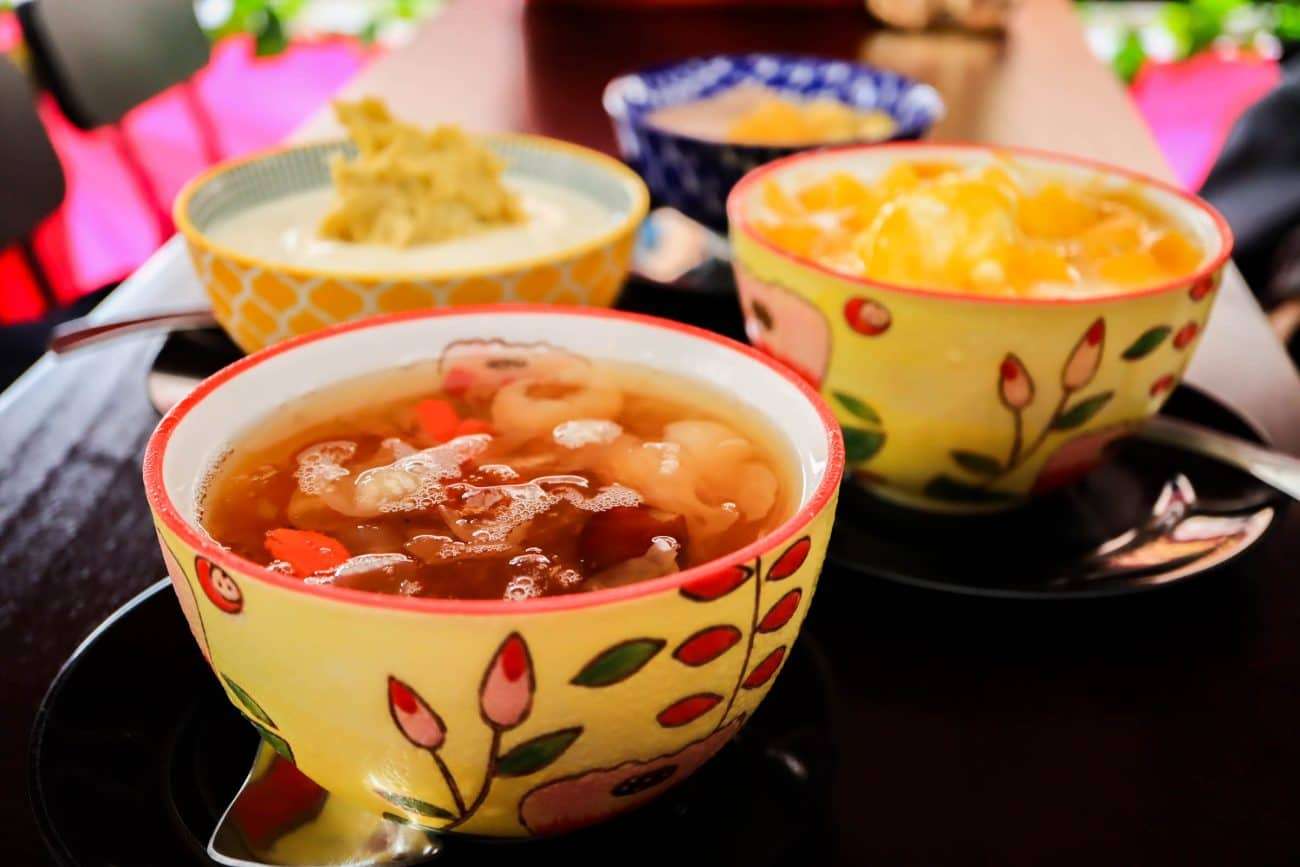 Looking for a place to chill out with your friends at midnight? Well, Tian Wang has got you covered. This new Chinese dessert cafe brings vibes to the next level with its neon lights and mahjong tile wallpaper. They also have popular Mandopop hits playing in the background. 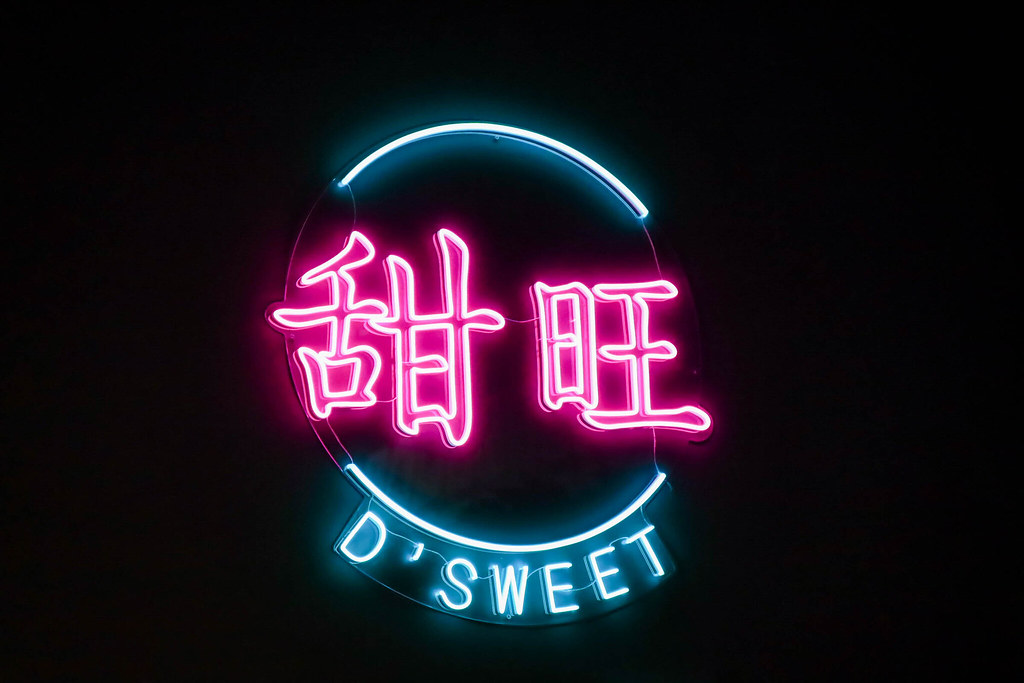 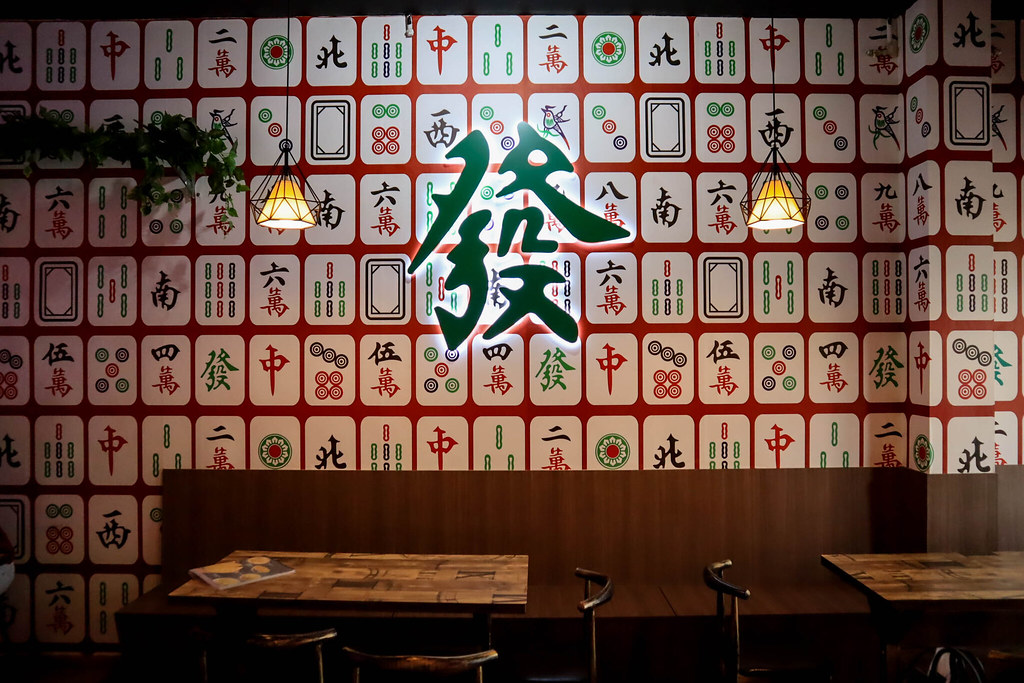 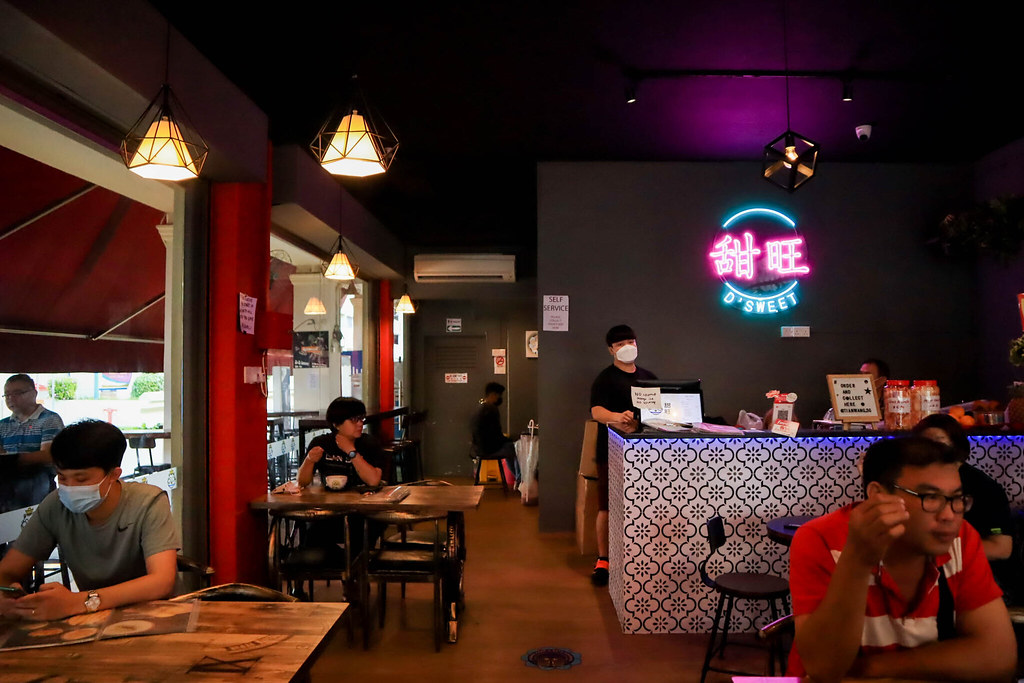 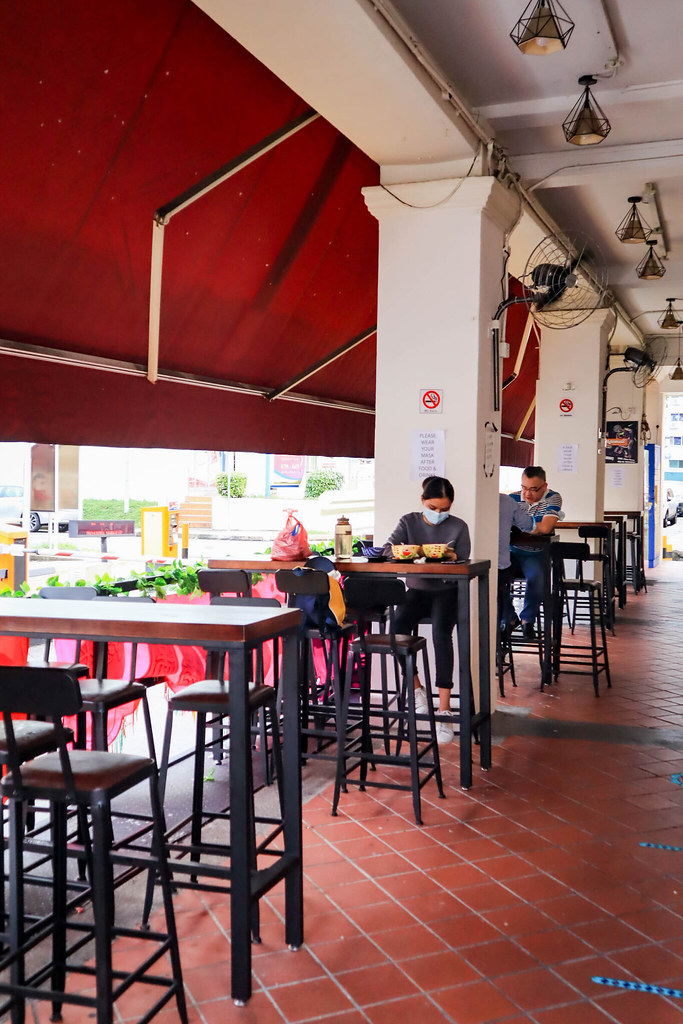 They have a good variety of desserts for you to choose from. There’s something for the young and the old and everyone in between. I had their signature Mao Shan Wang Durian Mousse ($9), Yam Paste with Pumpkin and Ginkgo Nut ($4.80), Peach Gum ($6.80) and Mango Sago ($4.20). 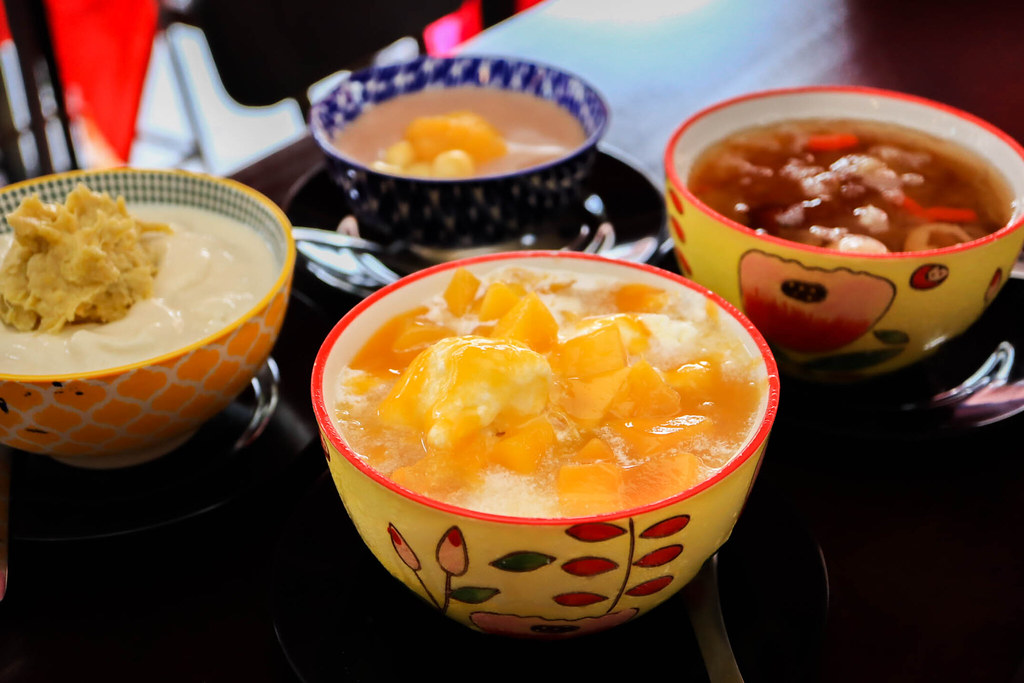 Starting with the healthiest dessert on the menu – Peach Gum. It’s quite a traditional dessert so I’m guessing that it would be more popular with the older generation as it’s something that they’re more familiar with. It is a mix of white fungus, goji berries, dates and longans in tong sui (sugar water). 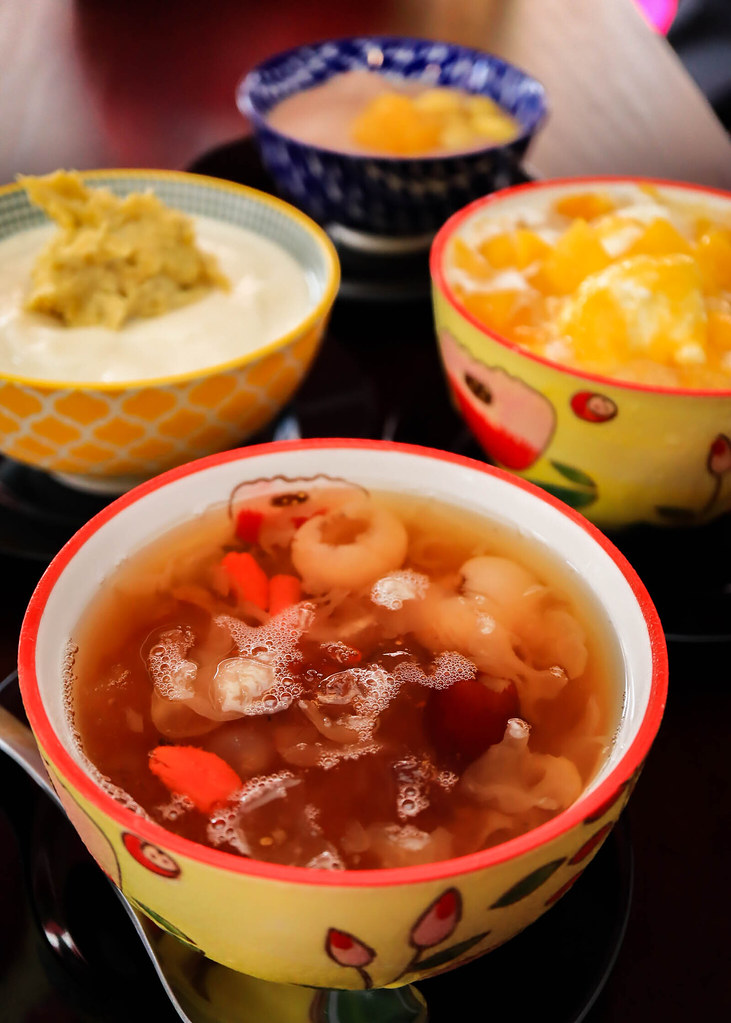 The peach gum dessert was very refreshing and not too sweet despite it being served in tong sui. There was a generous amount of ingredients that went into the bowl so it’s quite good value for money, considering that peach gum is a premium herb. You can choose to have it either hot or cold. 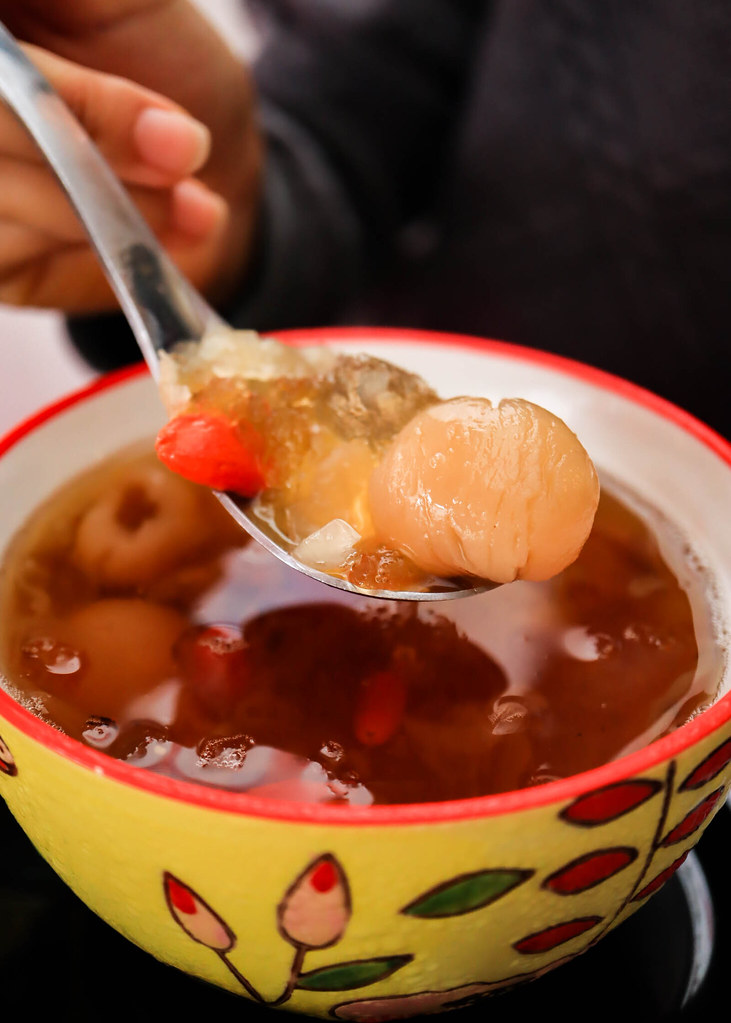 Next, something more appealing for most would be the Mango Sago. A creamy coconut milk base is topped with a small scoop of ice cream along with sizeable cubes of mangoes, some mango puree and sago seeds. It was not overly sweet as well, even with the melted ice cream being mixed into the coconut milk. 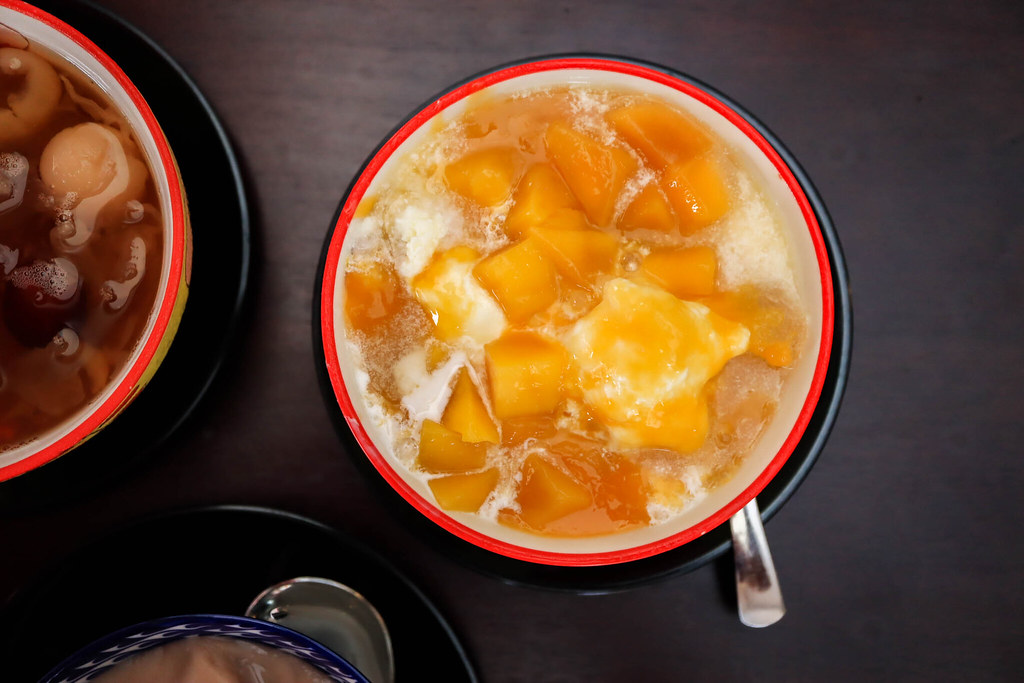 You might be looking for the pomelo pulps in here but found none. That is because they sell it separately, as another dessert called Mango Pomelo Sago ($4.80). Be sure to order this if you love the citrusy flesh! 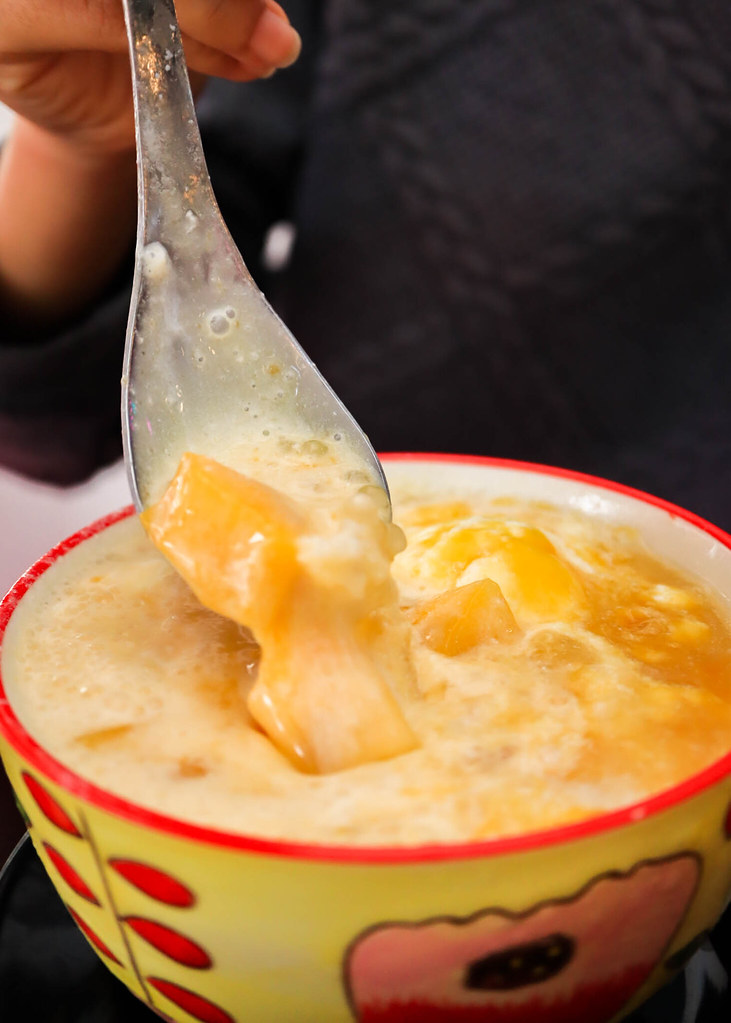 Onto my favourite on the menu – Yam Paste with Pumpkin and Ginkgo Nut. We all have some friends who are averse to anything yam but this one’s really for the fans. It was very smooth with just the right thickness, and didn’t leave me feeling jelak after. 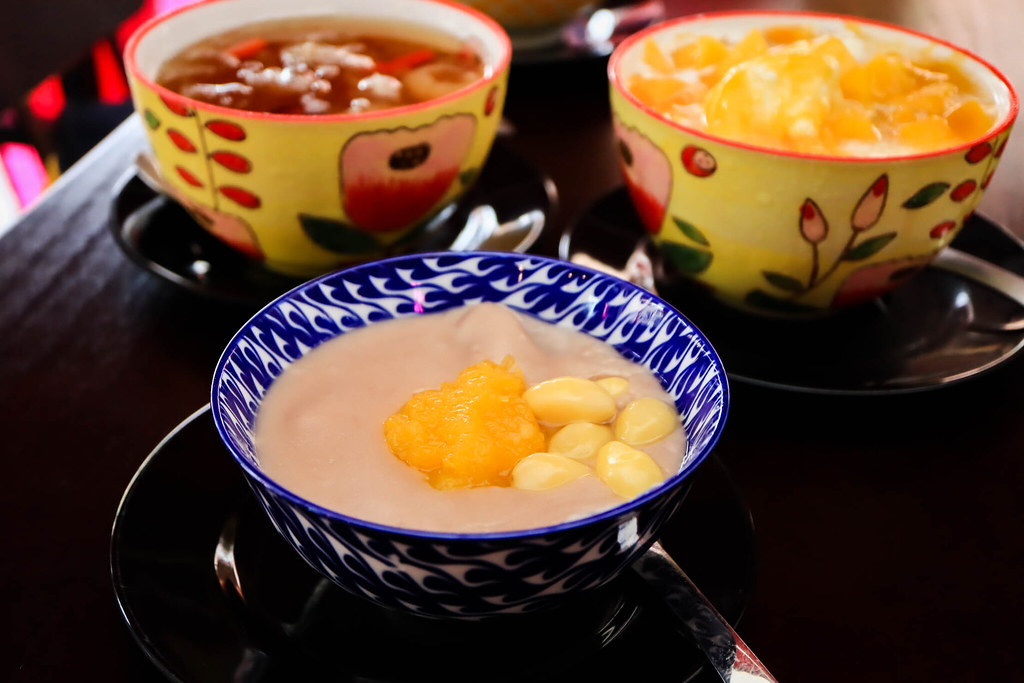 I admit that I am an old soul who goes for the weird stuff like ginkgo nuts and pumpkin. However, the ginkgo nuts were a tad too bitter for the yam paste. In fact, they tasted a little too raw for my liking. The pumpkin, on the other hand, did not add much in terms of taste. The dollop of pumpkin was quite bland in comparison to the yam paste which was sweet, but did provide a little textural contrast. I just left the nuts and pumpkin aside and was just attacking the yam paste because it was so good! 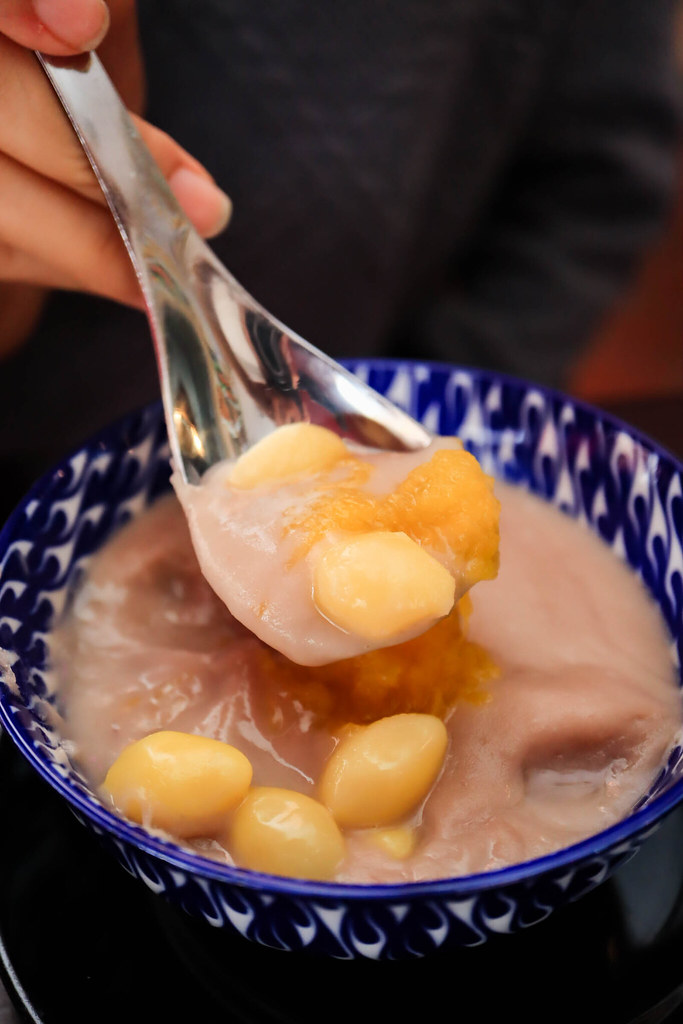 Last but not least, the signature dessert of Tian Wang – Durian Mousse. Interestingly, the consistency of the mousse resembled a cream-based soup instead of a puree, but it paired well with the Mao Shan Wang paste that’s made from the real fruit. 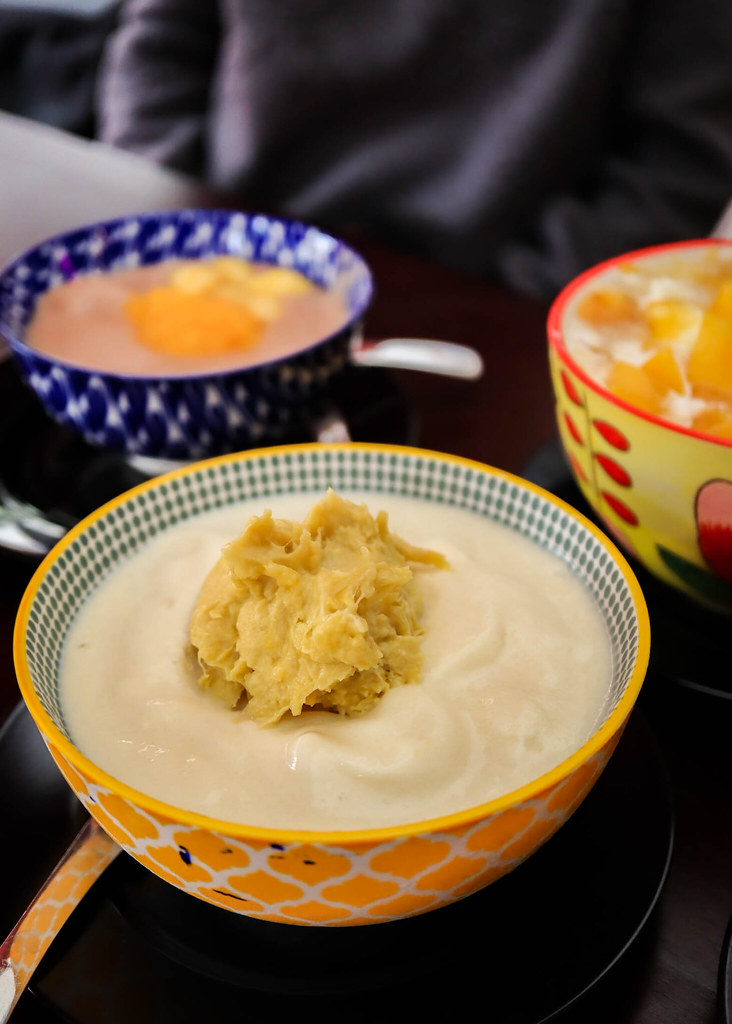 I would have hoped for a more generous portion of the Mao Shan Wang paste because after all, it was almost $10 for that rather small bowl of mousse. However, I do understand that using the real fruit would mean that higher costs are involved especially when the fruit is not in season. Hence, I would probably stick with my Yam Paste order the next visit. 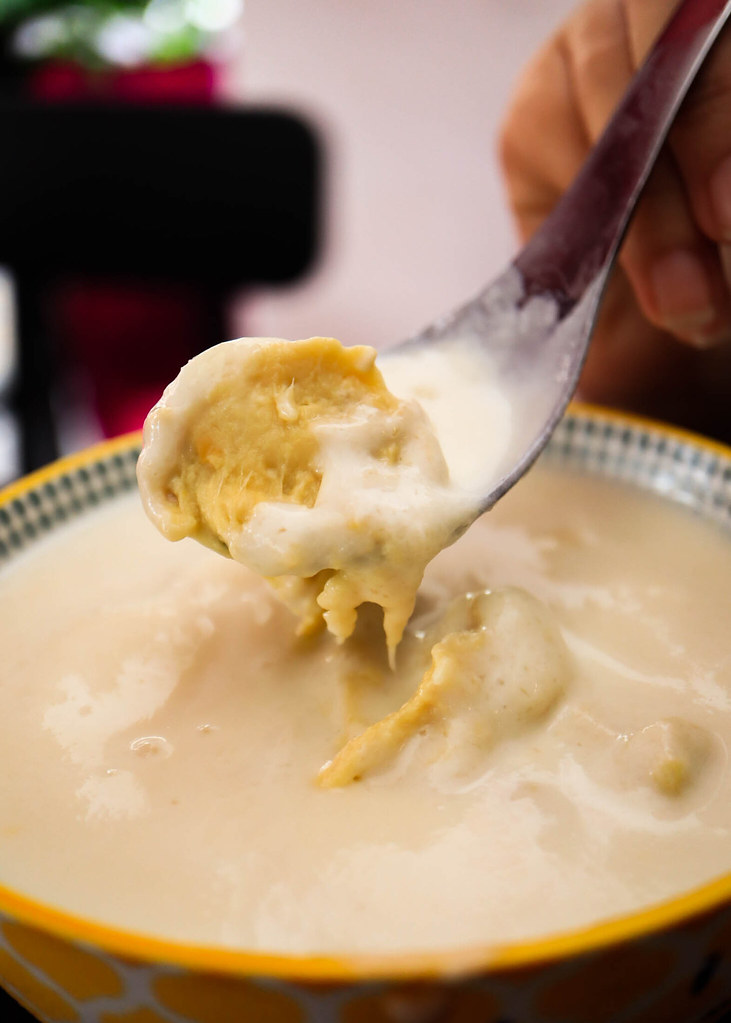 As they have just opened their doors for business, be kind and let them iron out some operational kinks. Do expect to wait for up to 30 – 40 minutes during their peak periods at night! After all, good things are worth the wait. 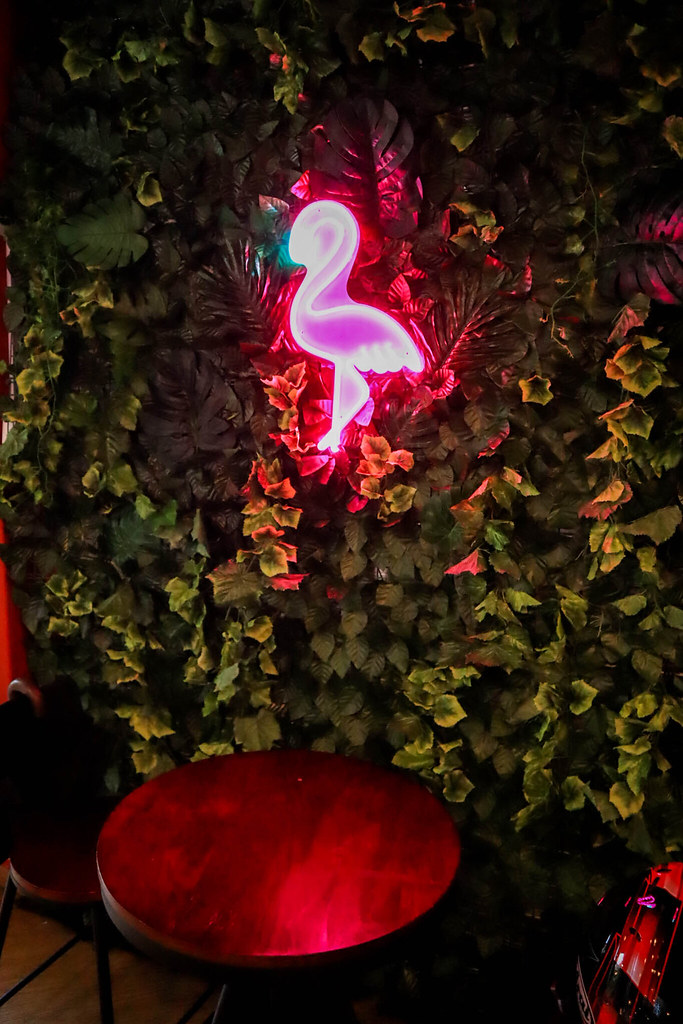 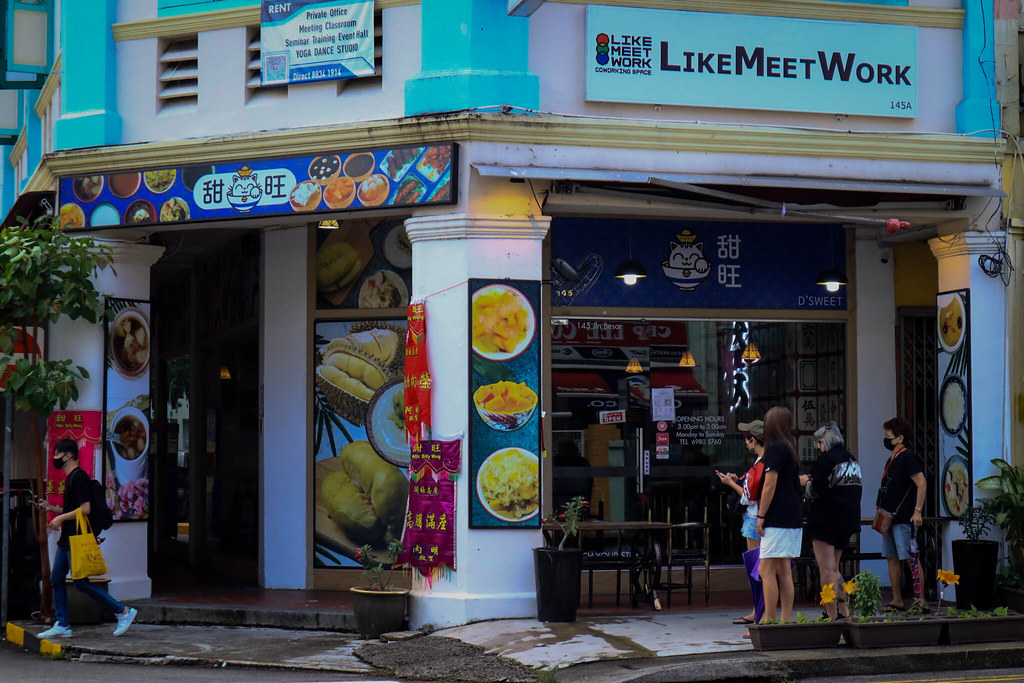 Opening Hours: 3pm to 3am daily.

Let’s build a food community that helps to update the food news in Singapore! Simply comment below if there’s any changes or additional info to Tian Wang 甜旺. We will verify and update from our side. Thanks in advance!