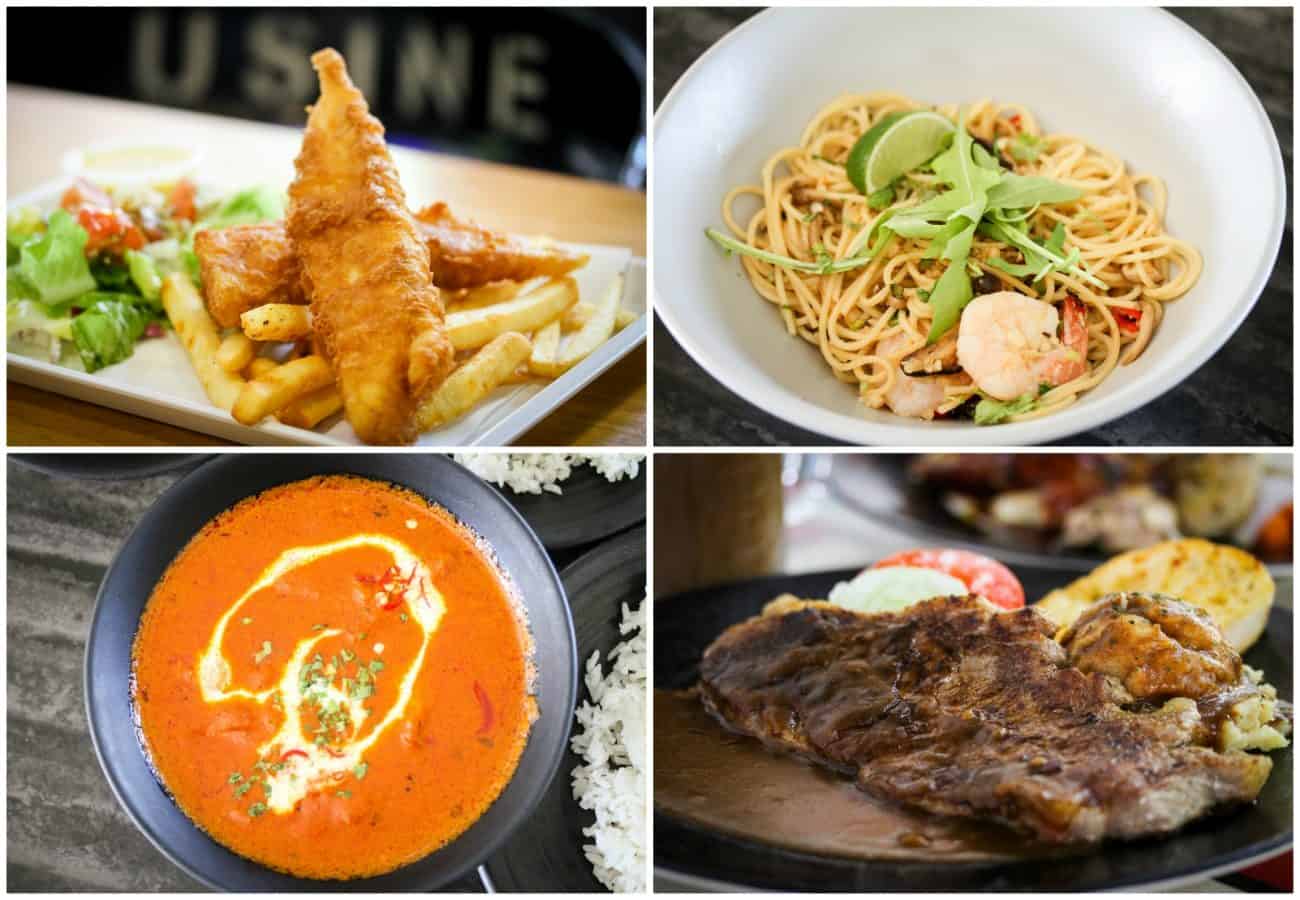 Our local hawker scene has always had a different take on western food. Even though they take inspiration from various Western cuisines, they have definitely adapted their dishes to make them uniquely Singaporean. Sure, you can go to a high-end restaurant and order yourself a piece of foie gras or a hunk of Wagyu ribeye steak. But to Singaporeans, nostalgia on a plate is a well-cooked chicken chop doused with a ladle full of warm brown gravy.

However, whenever my friends and I talk about affordable, value-for-money Western food, Astons is always the first place that comes to mind. However, I’m here to show you that there are plenty of alternatives in our hawker centres that are cheaper (and might even be better) than Astons! 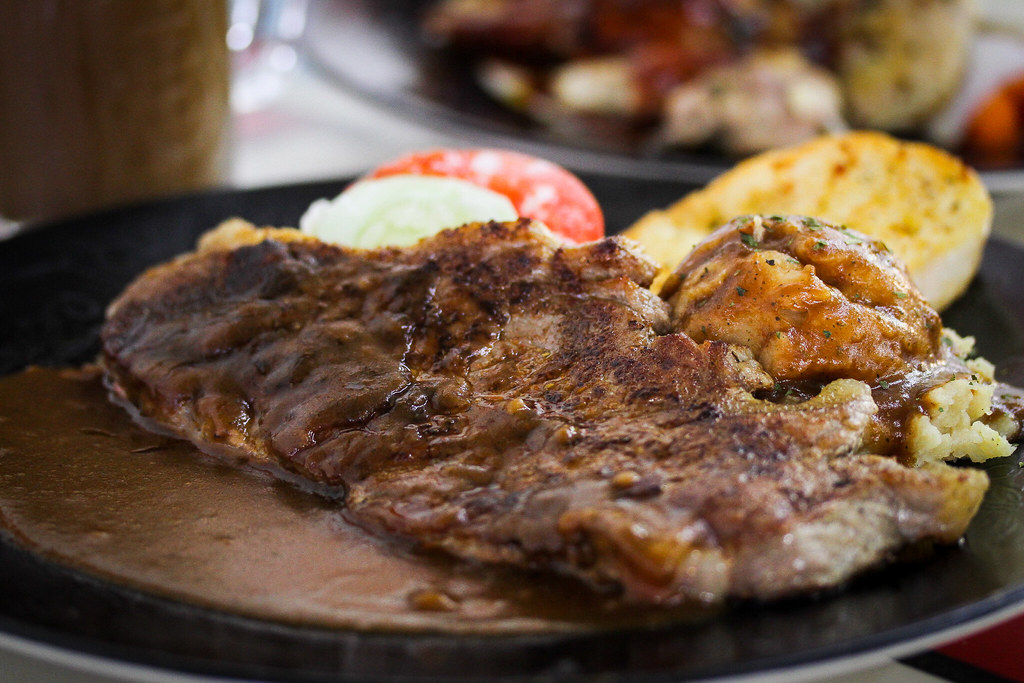 Happy Chef Western Food often gets overshadowed by the Tai Hwa Pork Noodle stall, its Michelin-starred neighbour. However, if you don’t have an hour to queue up for your food, Happy Chef is still a solid option! At just $10.00, I ordered the Sirloin Steak which was covered in a delicious brown gravy. The gravy is actually made in-house, using a blend of vegetables and herbs. I could definitely smell the difference as it had a subtle aroma of rosemary! 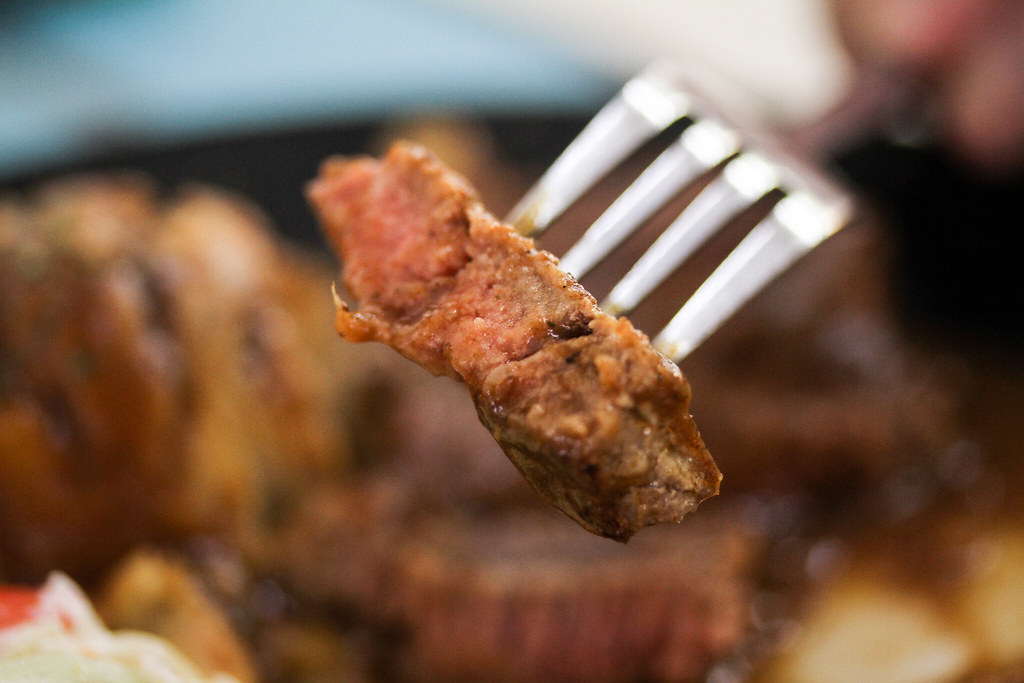 At such a low price, you get quite a sizeable portion of steak. The steak had a dark sear on the outside, while still being cooked to a perfect medium rare as I requested. This was very impressive given that this steak came out of a hawker stall! Each mouthful was a delicious combination of juicy tender steak and the warm herbaceous brown sauce. You also get a choice of two sides from their menu. I opted for the mashed potatoes and coleslaw. These were nothing to write home about and were decent at best – the steak was still the star of the show. 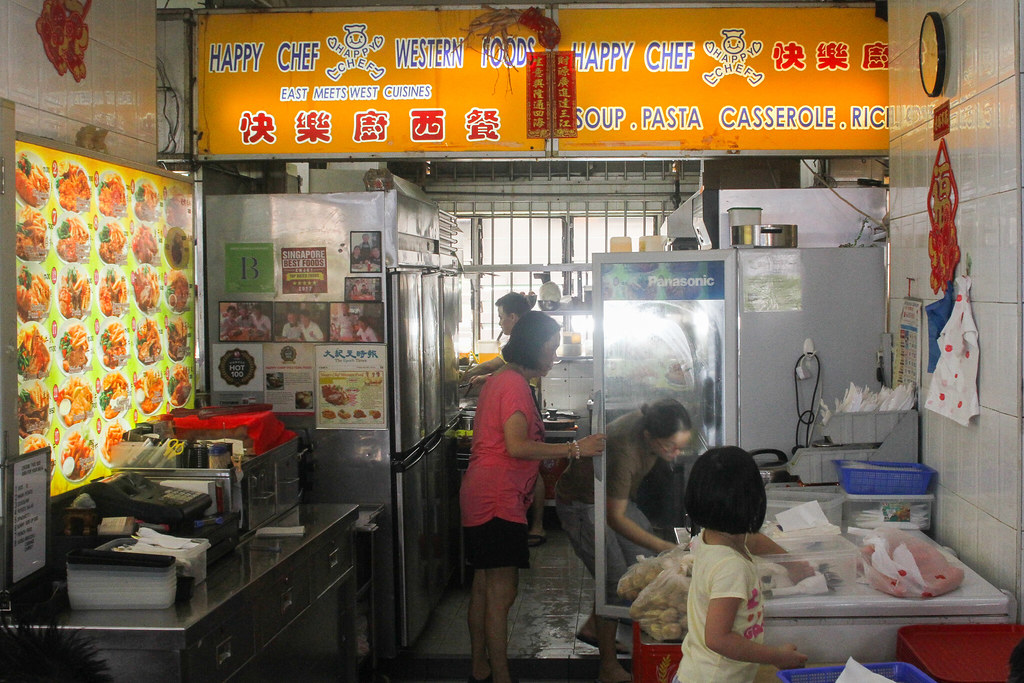 Opening Hours: 11am to 9pm daily, closed on Thursday. 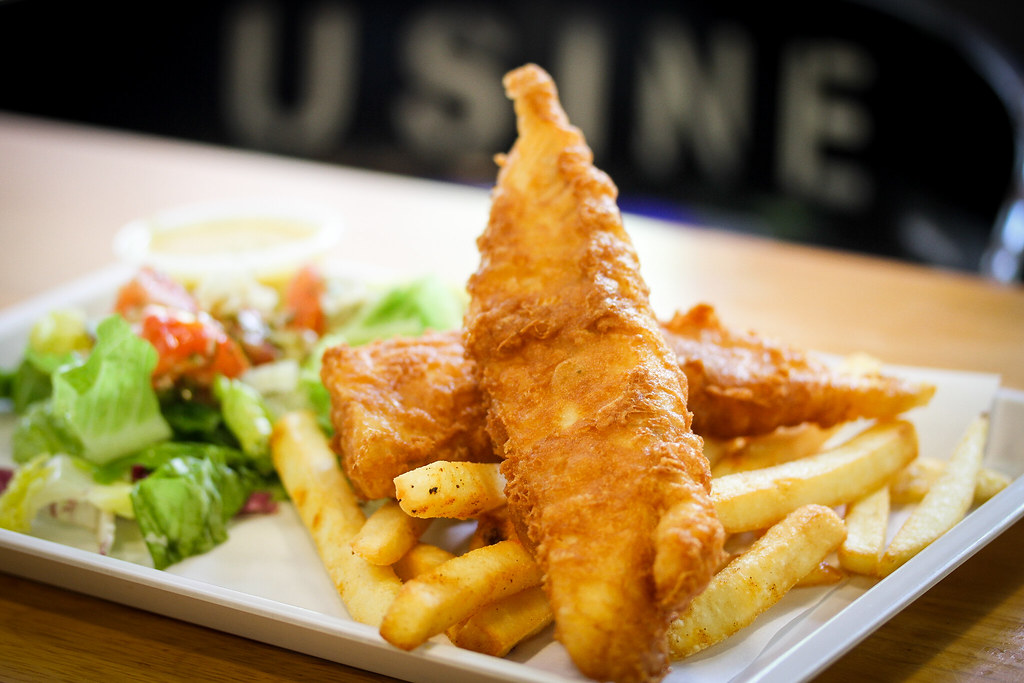 This list would not be complete without the inclusion of a fish and chips place! Seasalt opened four years ago in a small upscale food court, which is just a five-minute walk from Marymount MRT. This little western food stall sells more than just fish and chips though. Their menu also features ‘seafood in a pot’, which includes surprisingly affordable mussels, clams, prawns and lobsters.

There’s quite a wide variety of choices you can go for with your fish and chips. For fish, you can choose between dory ($9), snapper ($13) or haddock ($13). The accompanying sauces cost extra, with options such as lemon butter sauce, nacho cheese, wasabi mayo and even creamy salted egg sauce! I ordered the haddock as it came highly recommended from the chef, together with the creamy salted egg sauce ($3) which I could not pass up! 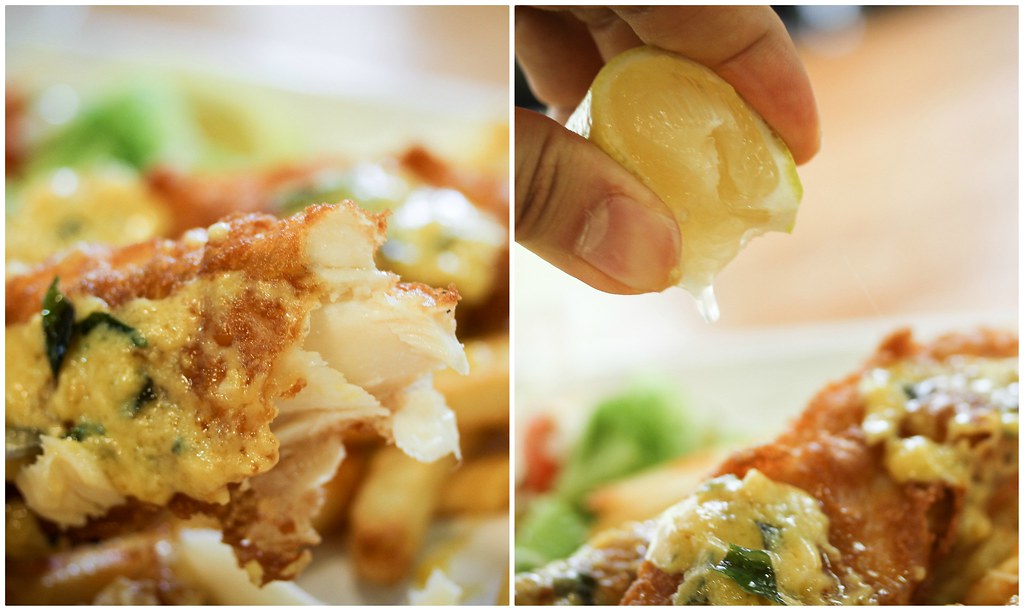 The haddock was coated in a thin and crispy batter that was not too greasy. This allowed the flavour of the fish to come through – it was very fresh tasting and was extremely tender. However, I felt that the fish could have done with a touch more salt. The creamy salted egg was the priciest of the sauces but also lacked flavour in my opinion. Despite the food’s shortcomings, I would definitely return to Seasalt as the quality and freshness of their fish is impressive! 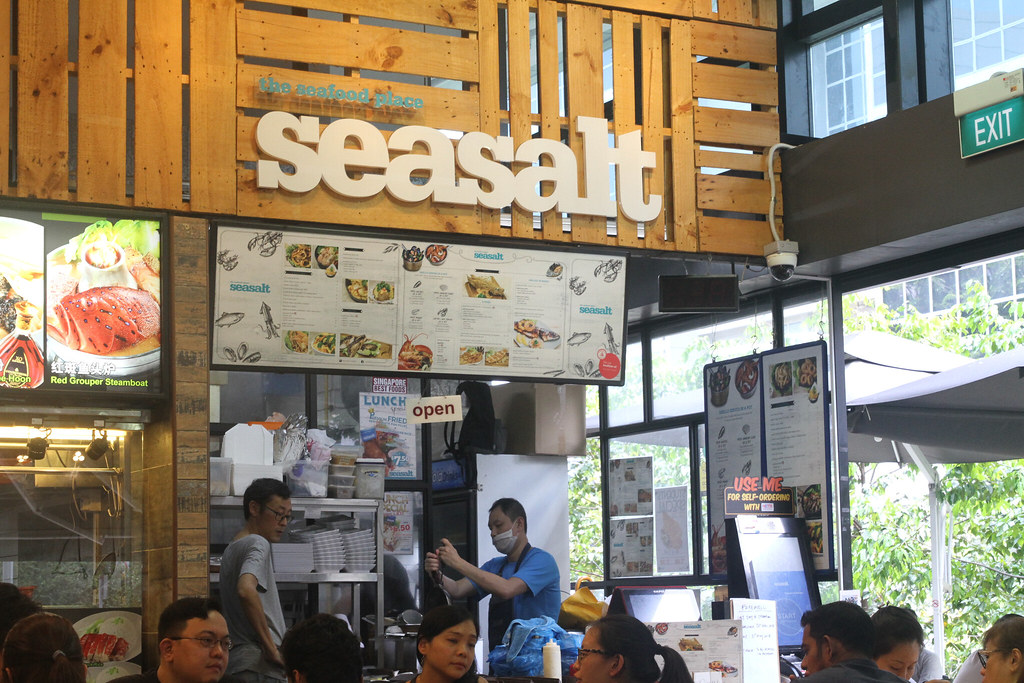 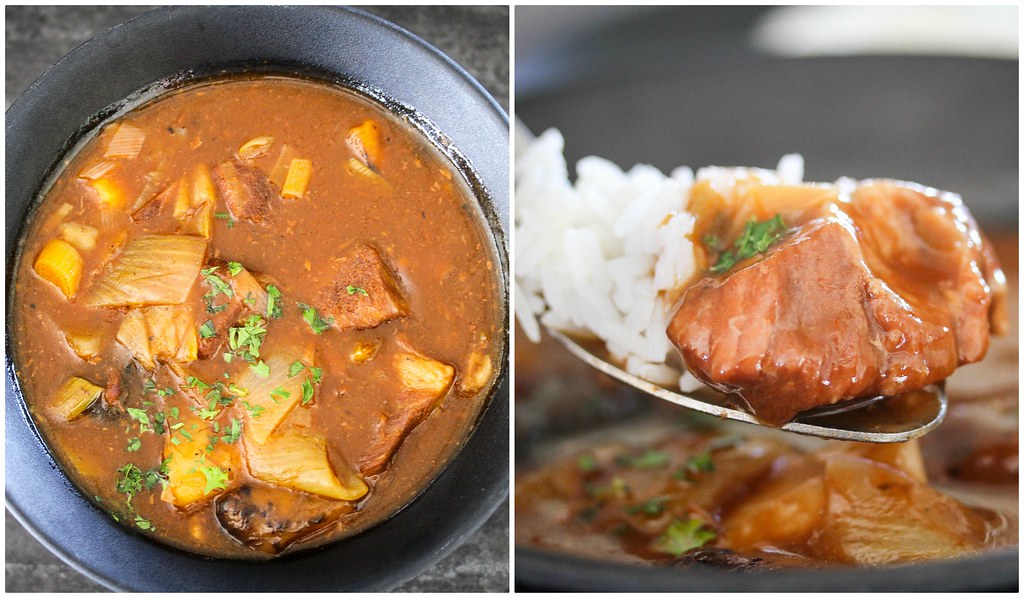 Many of us have heard of LAD & DAD at Maxwell Food Centre. But did you know that there’s another hawker stall in Singapore that sells rustic meat stews?

Meet The Stew House, which is located on the second floor of Pasir Ris Central Hawker Centre. The stall serves up a selection of both Western stews and Asian curries. Their Beef Bourguinon ($6/ $8) is a traditional French classic featuring a hearty bowl of warm brown gravy and pieces of tender succulent beef. The bowl is also filled with a variety of diced vegetables, which made each mouthful more substantial. Though I ordered the $6 portion, I wished that there was more beef in my serving. 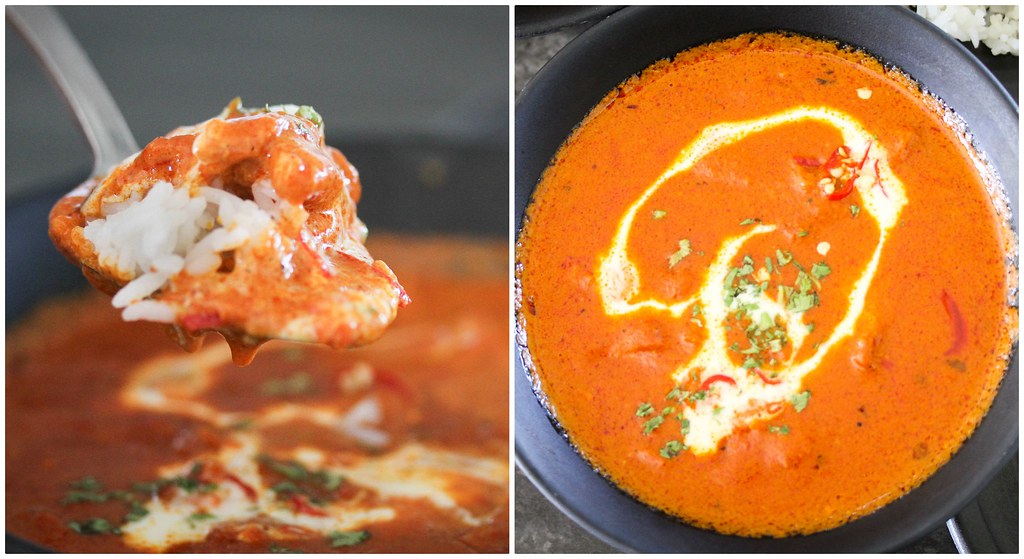 I also tried their Chicken Tikka Masala ($5/ $7), which tasted like a westernised curry as it was way too rich and creamy. Though it had a subtle spicy kick, I could not really taste the spices used. Overall, I would suggest ordering the Beef Bourguinon over this dish. 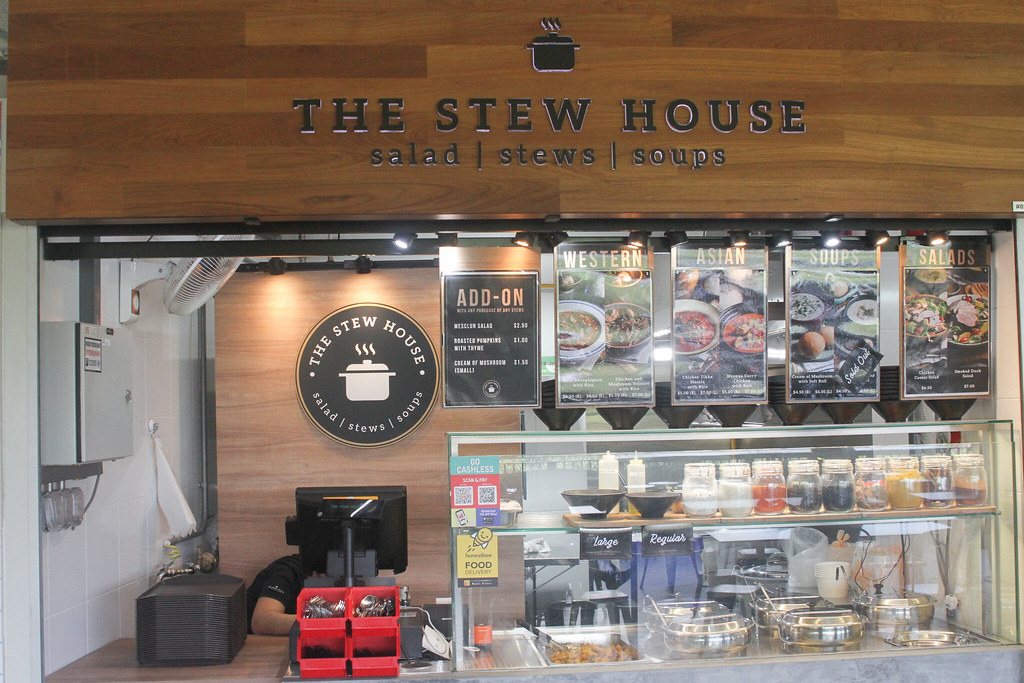 Opening Hours: 11am to 9pm daily, closed on Monday.

Having just opened a month ago, The Flaming Pan is run by a young 28-year-old and serves up Asian-inspired fusion pasta dishes! Though, if you are craving for something more traditional, the stall also has a ‘safe-bet pastas’ menu which includes classics such as Carbonara and Beef Bolognese. 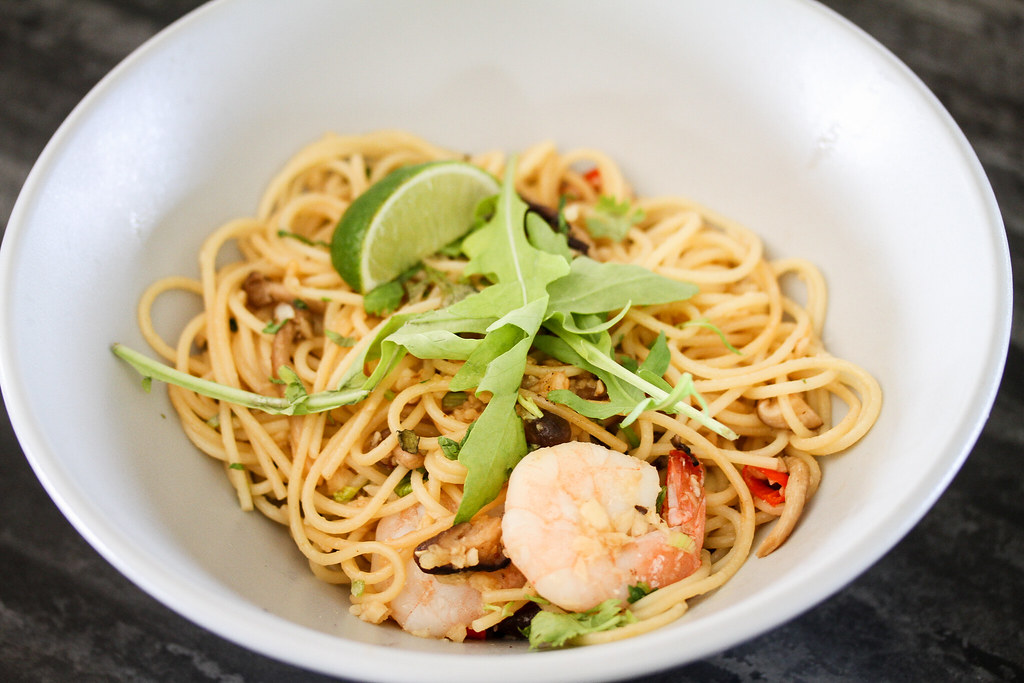 The Thai Style Aglio Olio ($7.50) is a unique twist on the popular pasta dish. The chef uses non-traditional ingredients such as kaffir lime leaves, fish sauce, coriander and chilli padi in the making of the sauce! The pasta is also mixed in with mushrooms, prawns, arugula and a wedge of lime. 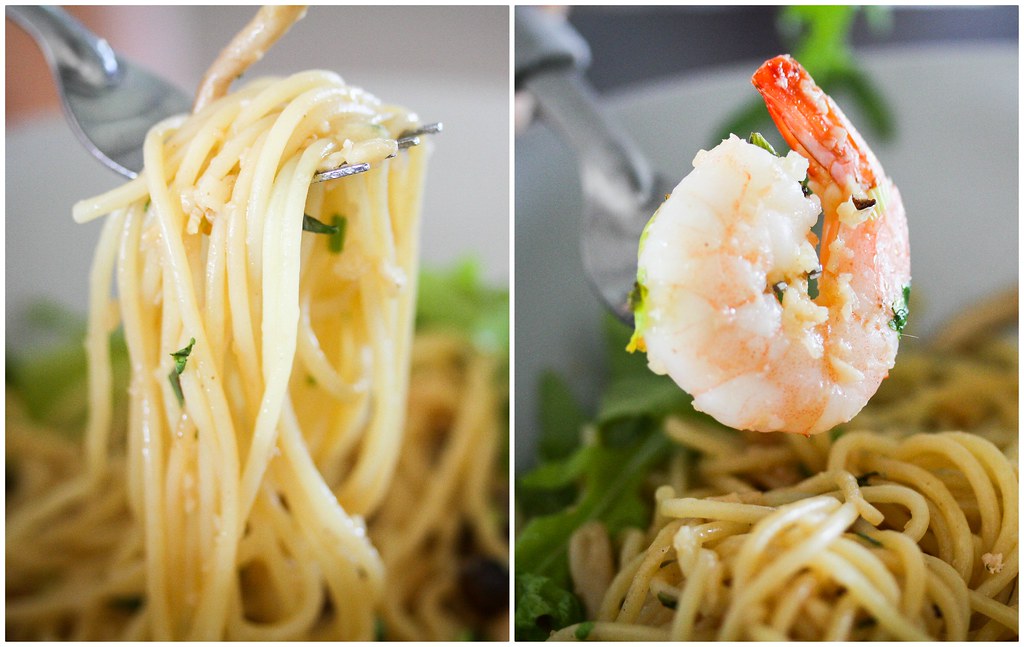 The pasta was cooked al dente and was slightly firm to the bite. The pasta may look plain, but its flavour packed a punch with the combination of the spiciness of the chilli and the strong aroma of garlic. The prawns were cooked perfectly and remained springy and tender. Fair warning though, you should steer clear of this dish if you are not a fan of garlic! They have loads of other dishes you can try, including their Beef Rendang Pasta ($9.80) and their Chicken Sambal Belacan Pasta ($8.80). 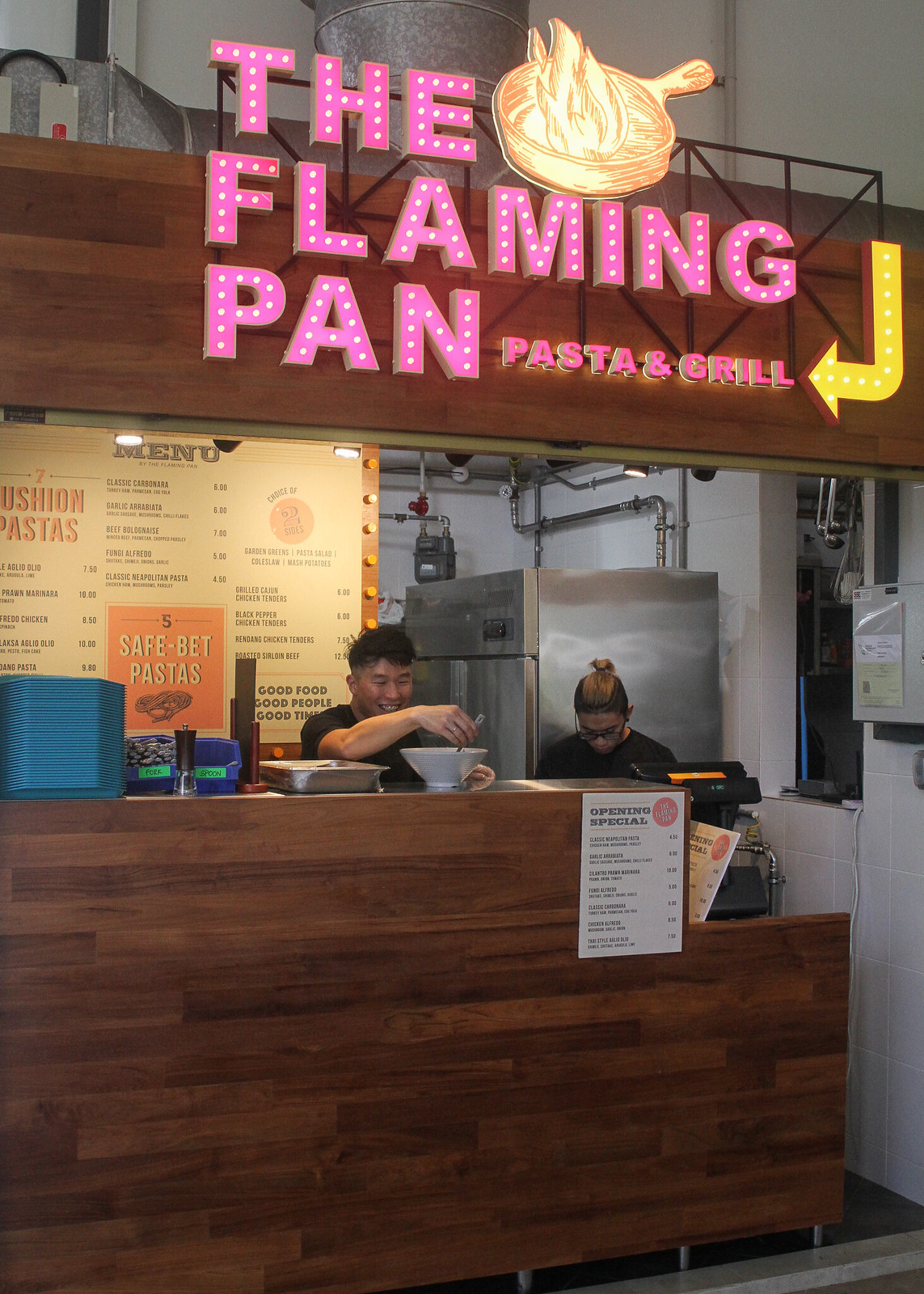 Opening Hours: 11am to 9pm daily, closed on Monday. 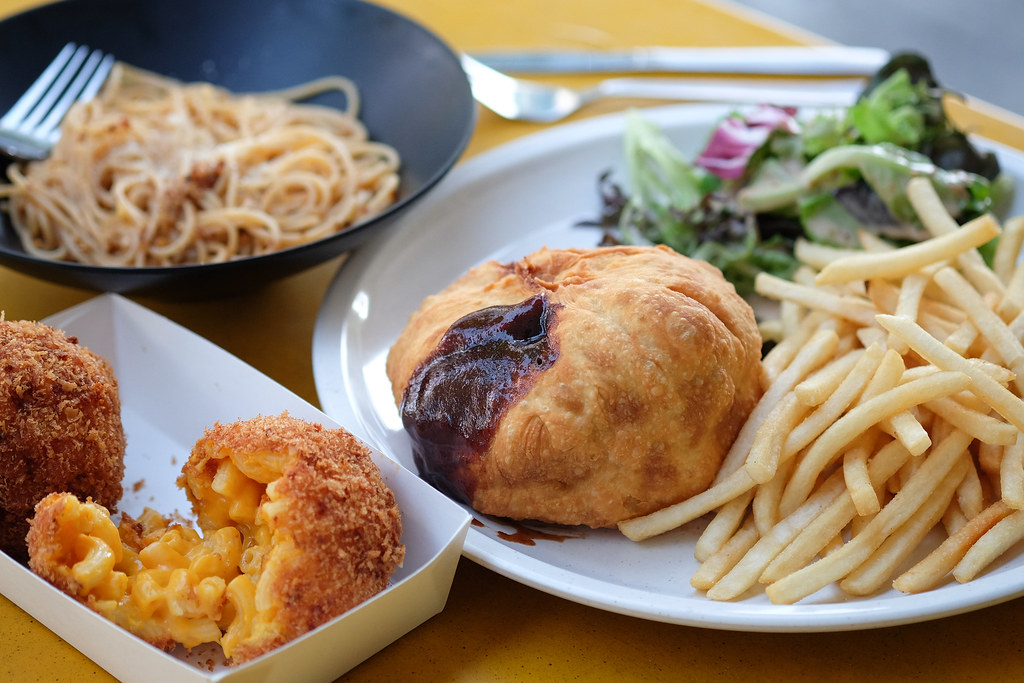 Even though Fat Monkeys is famous for its novel Fried Mac and Cheese, you should definitely give ‘Da Bomb’ a try! This sinful and calorie-filled parcel, which can be found at a coffeeshop in Kovan, will set you back at $13.80. Enclosed in a deep-fried dough casing, Da Bomb is made up of a succulent beef/ chicken patty, caramelised onions, cheddar cheese, crispy bacon and a homemade barbecue sauce. 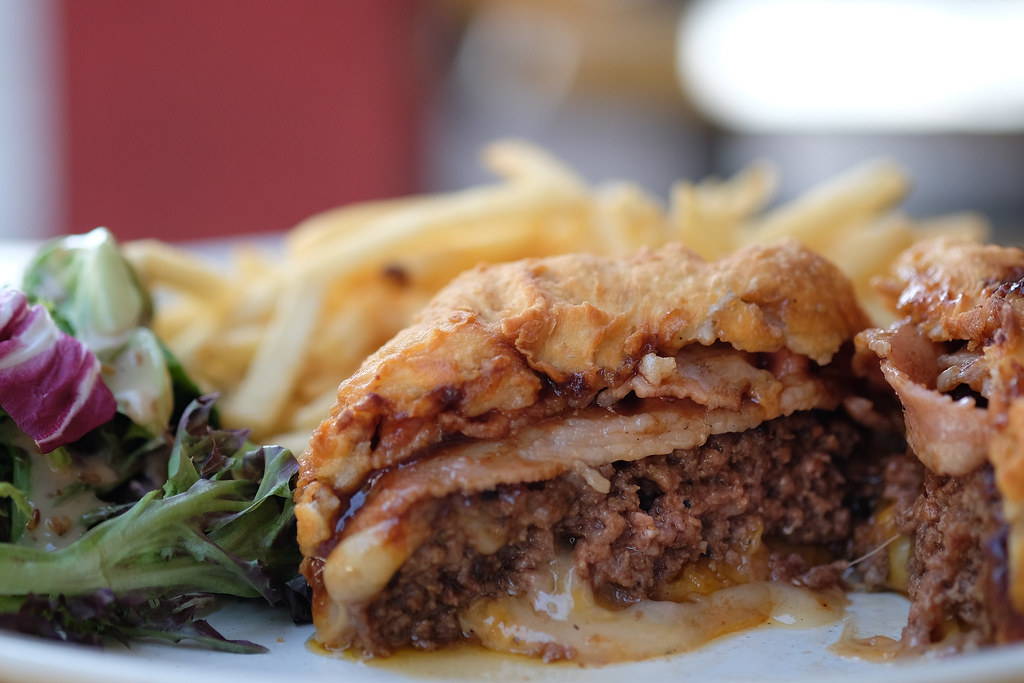 Da Bomb is a literal flavour explosion as each of the elements of the dish came together beautifully. The deep-fried dough is crisp on the surface but is slightly chewy on the inside. The beef patty was soft, flavourful and bursting with juices, while the streaks of bacon added a lovely smokiness. The melted oozing cheese had a strong and robust flavour and brought everything together. However, this dish might not be for everyone, seeing that it was almost over-indulgent and oily. A salad is also served on the side. It is dressed with a tangy sesame dressing which added a refreshing lift to the overall dish. The fries on the side were crispy and well-cooked, but a tad too salty. 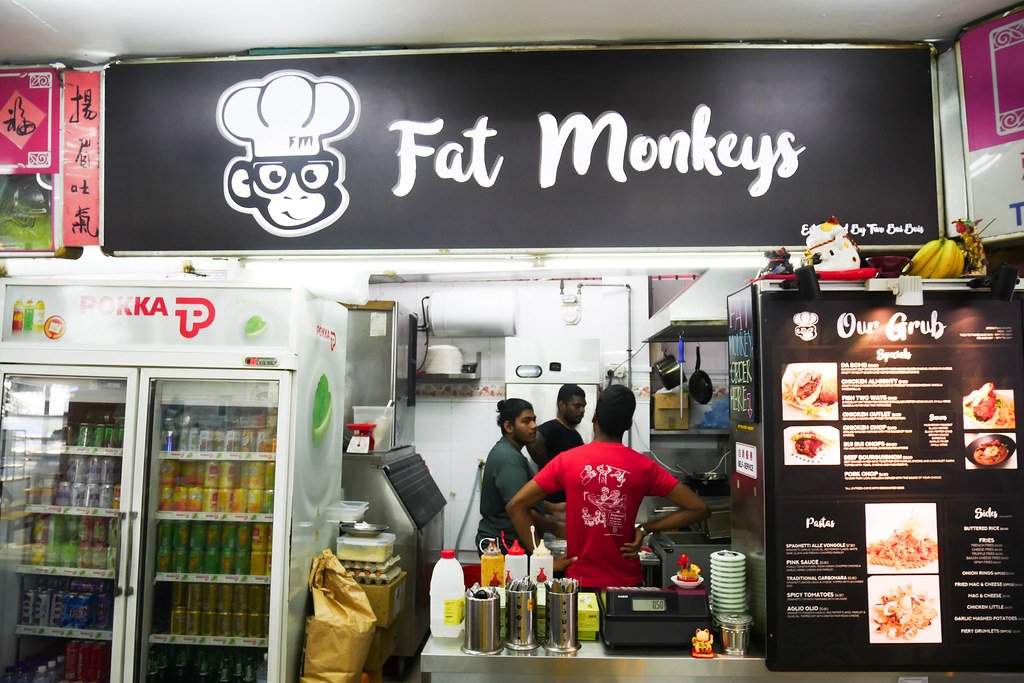 Smokin’ Joe Western BBQ aims to bring fine-dining quality Western food to the heartlands. The stall’s dishes are primarily prepared using a charcoal grill – an impressive feat for a stall of its size!

We ordered the Honey Sriracha Citrus Norwegian Salmon ($14). This dish features a chargrilled 150g filet of Norwegian Salmon and is served with mashed potatoes, broccoli and additional pieces of fried salmon skin. We couldn’t wait to dig in as we witnessed chef-owner Joseph intricately plating the dish.

You May Also Like
Kacang Pool Special - Who Knew Beans Could Be So Darn Delicious? 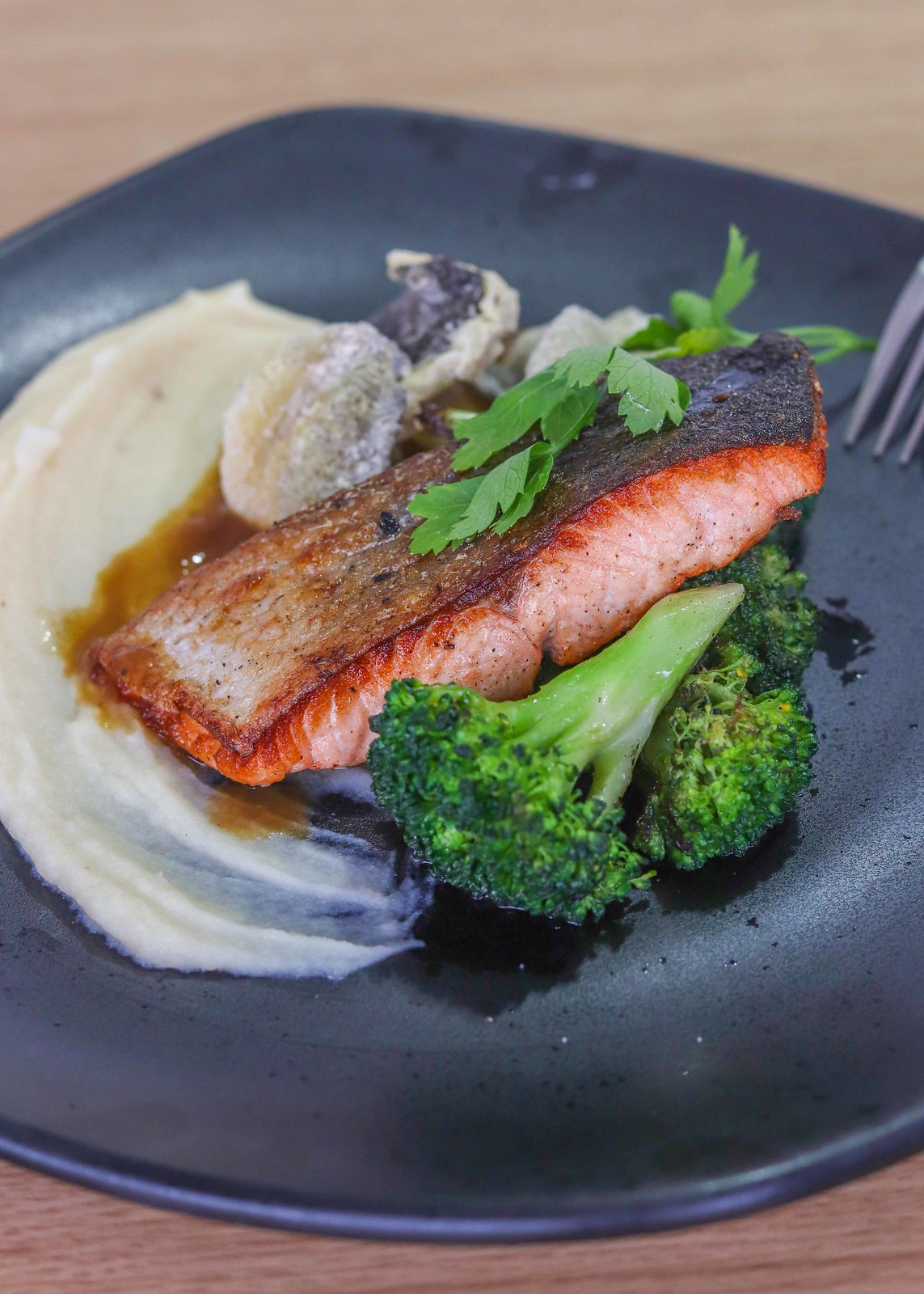 The salmon was mind-blowing from the first bite to the last. The salmon skin was crispy, while the flesh was succulent and tender. The pieces of fried salmon skin served on the side added more crunchy goodness. Though I thoroughly enjoyed the dish, it was on the pricier side. If you’re looking for a cheaper alternative, you could try their BBQ Boneless Chicken Leg ($7) which is equally as delicious! 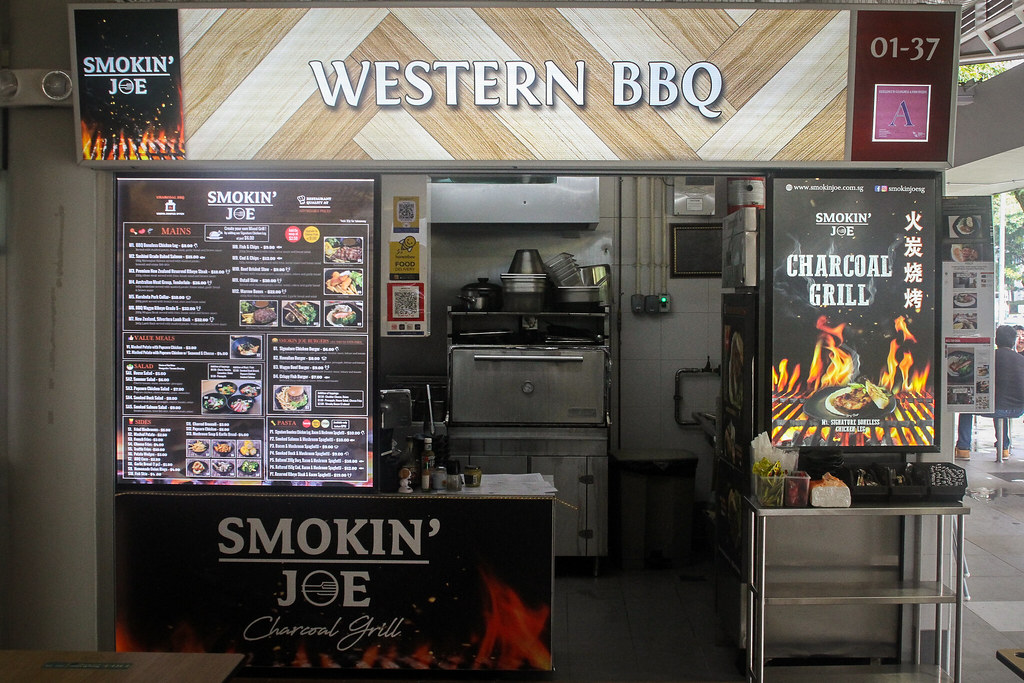 Old Airport Road Food Centre is one of Singapore’s oldest, largest and most iconic hawker centres. In this food haven, you can find Salt, a Western food stall run by two young and motivated hawkerpreneurs. Their menu is relatively simple: you have a choice between a fried chicken cutlet or the sous vide grilled chicken (you read that right, sous vide). Then for carbs, you can pick either pasta (Carbonara, Aglio olio, Bolognese) or garlic fried rice. 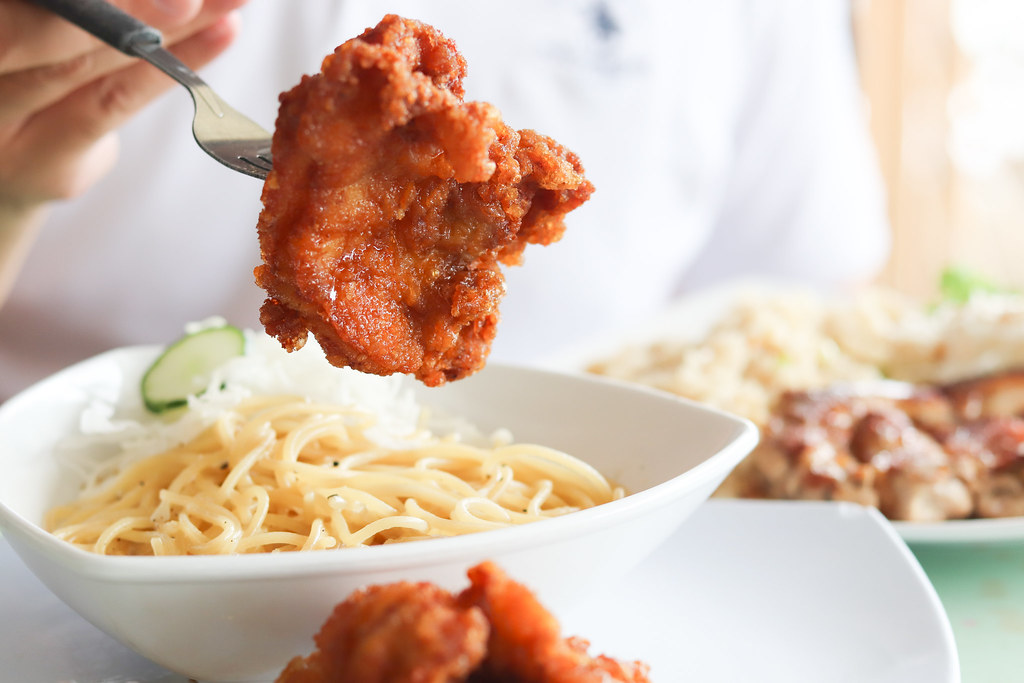 Eventually, we decided on the Chicken Cutlet with Carbonara ($6.80)! This dish looked absolutely tantalising with its crispy skin that was cooked to golden-brown perfection. The crispy skin tastes like a heavenly combination between Japanese tempura and karaage, and even trumps any that we’ve eaten at typical fast food chains. The meat itself was delicious too as it was perfumed with salty-sweet soy garlic sauce. 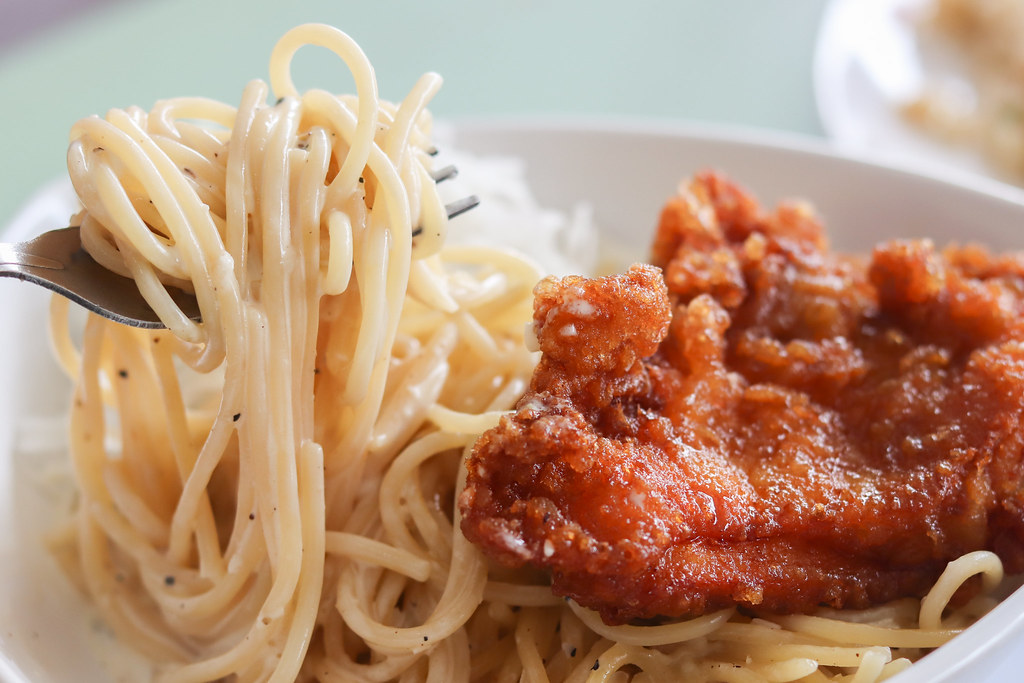 The accompanying carbonara had a sauce that was less creamy than others out there. According to Salt’s friendly owners, they are not fans of the typical starchy carbonara sauce, which explains the adaptation of their carbonara to a lighter Japanese cream-based style. While the pasta was cooked perfectly al dente, we thought it could use a bit more salt. 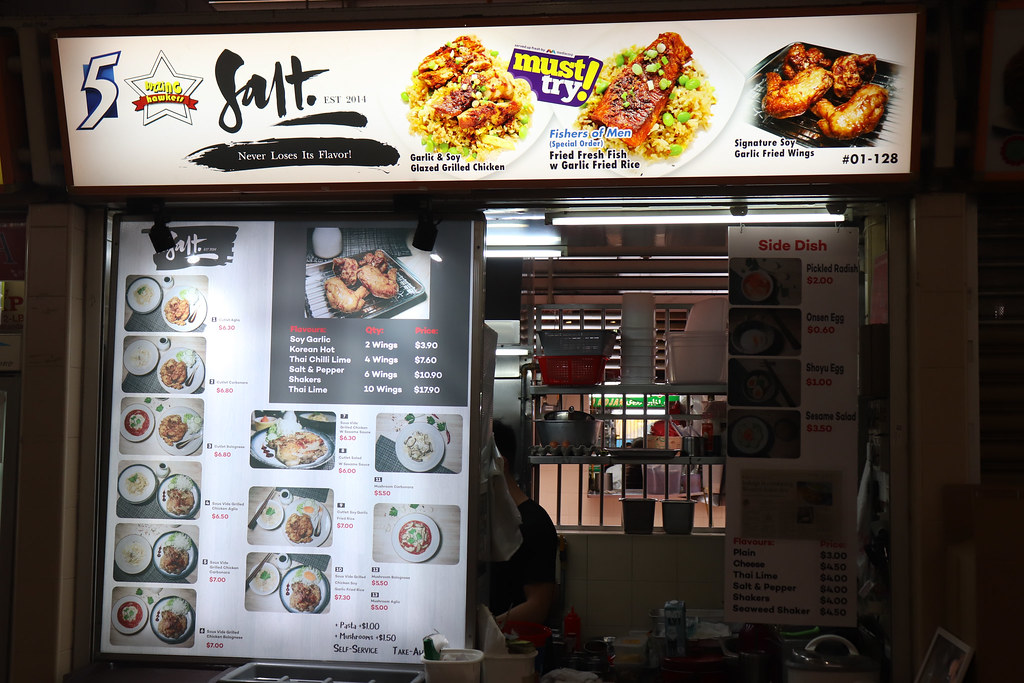 Opening Hours: 12pm to 2.30pm, and 5pm to 9pm daily. Closed on Tues. Usually, closed for LUNCH only on Sundays too.

MissTamChiak.com made anonymous visits and paid its own meals at the stalls featured here.

Let’s build a food community that helps to update the food news in Singapore! Simply comment below if there’s any changes or additional info to the cafes/stalls listed above. We will verify and update from our side. Thanks in advance!

An avid home cook who wishes to inspire others with the sheer amount of food that he can eat.