You are here: Home » * Must Try * » Gather – New Crepe Place To Go To-Gather With Friends! 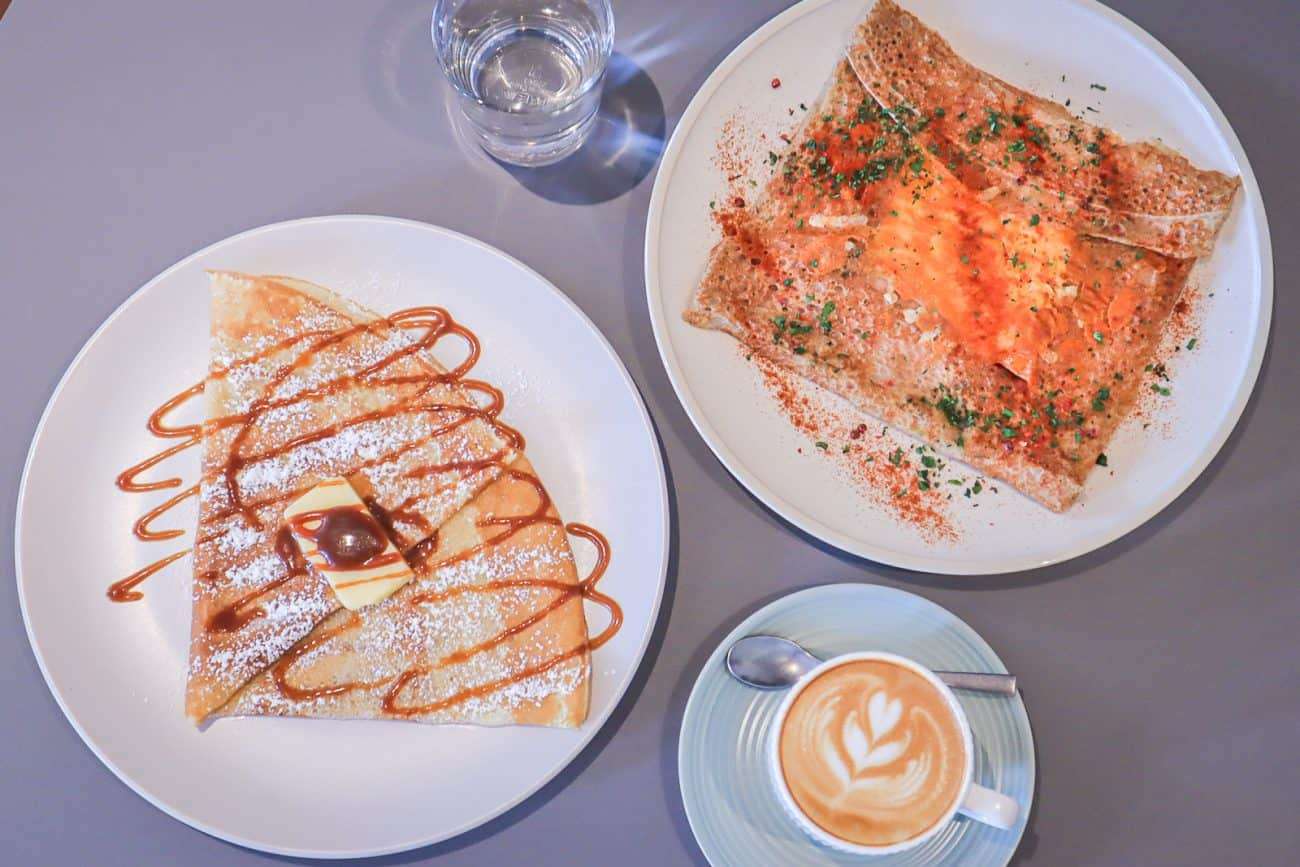 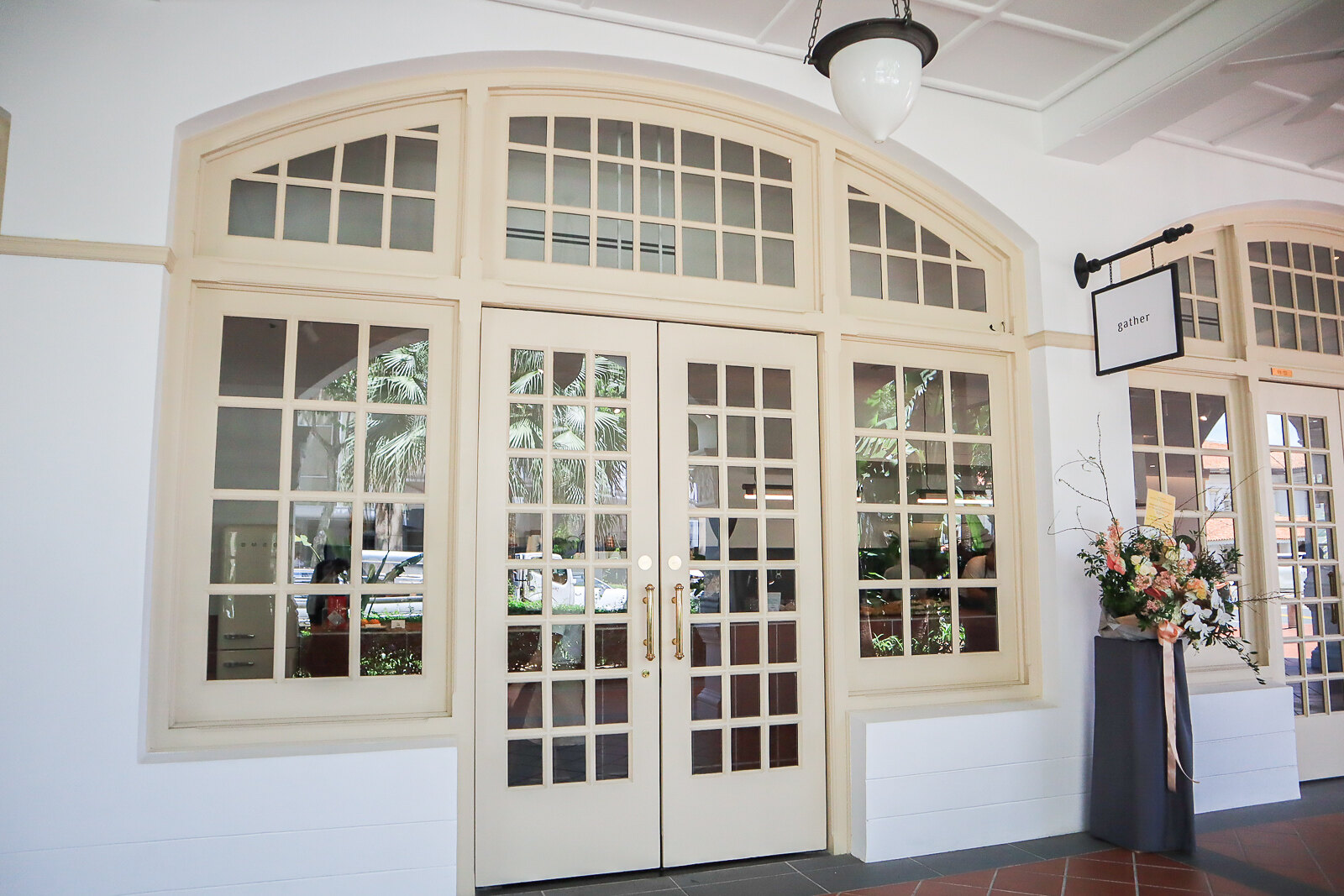 Opened officially on 6 February, Gather is a new cafe that has taken over the previous Empire Cafe and Ah Teng’s Bakery at Raffles Arcade. 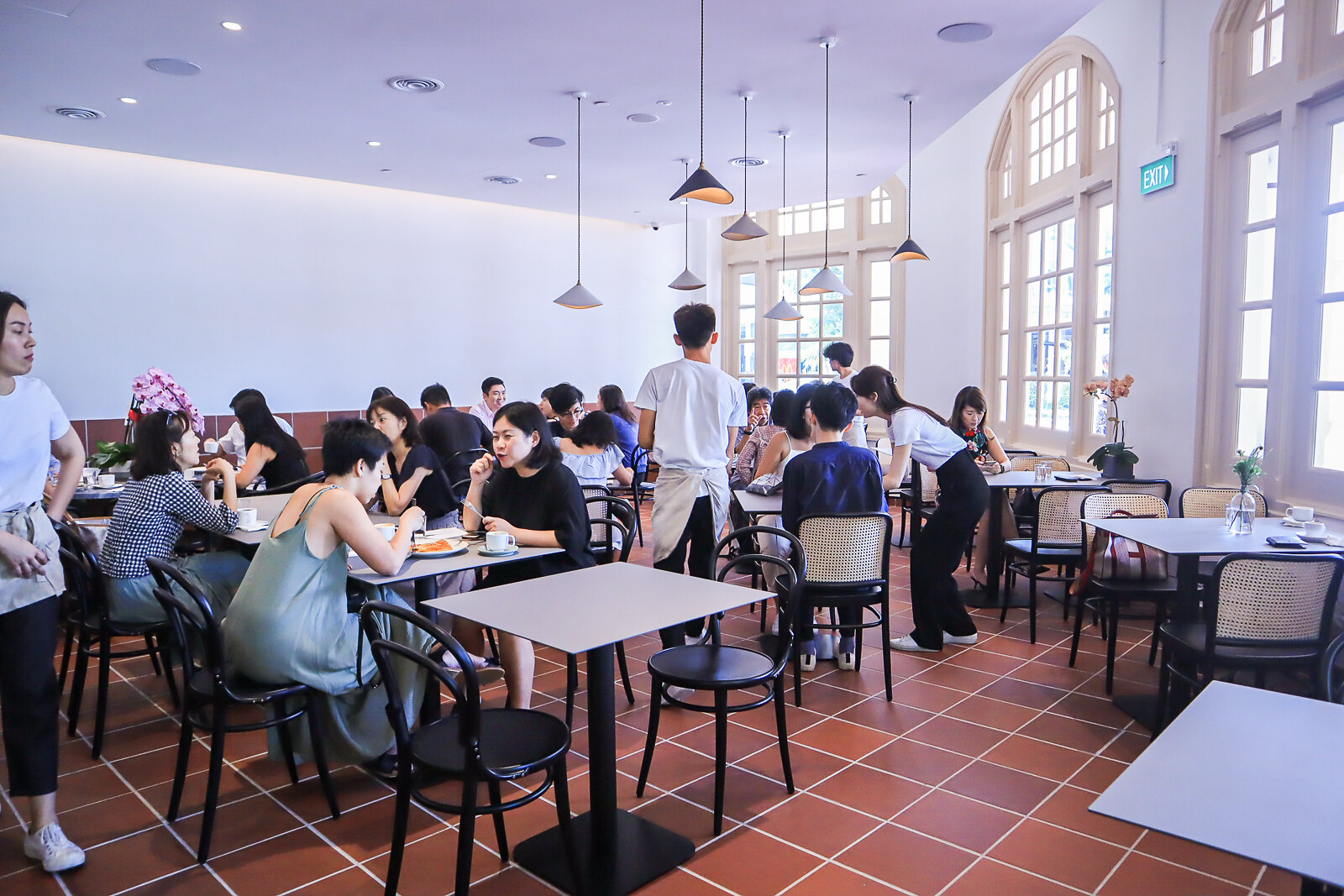 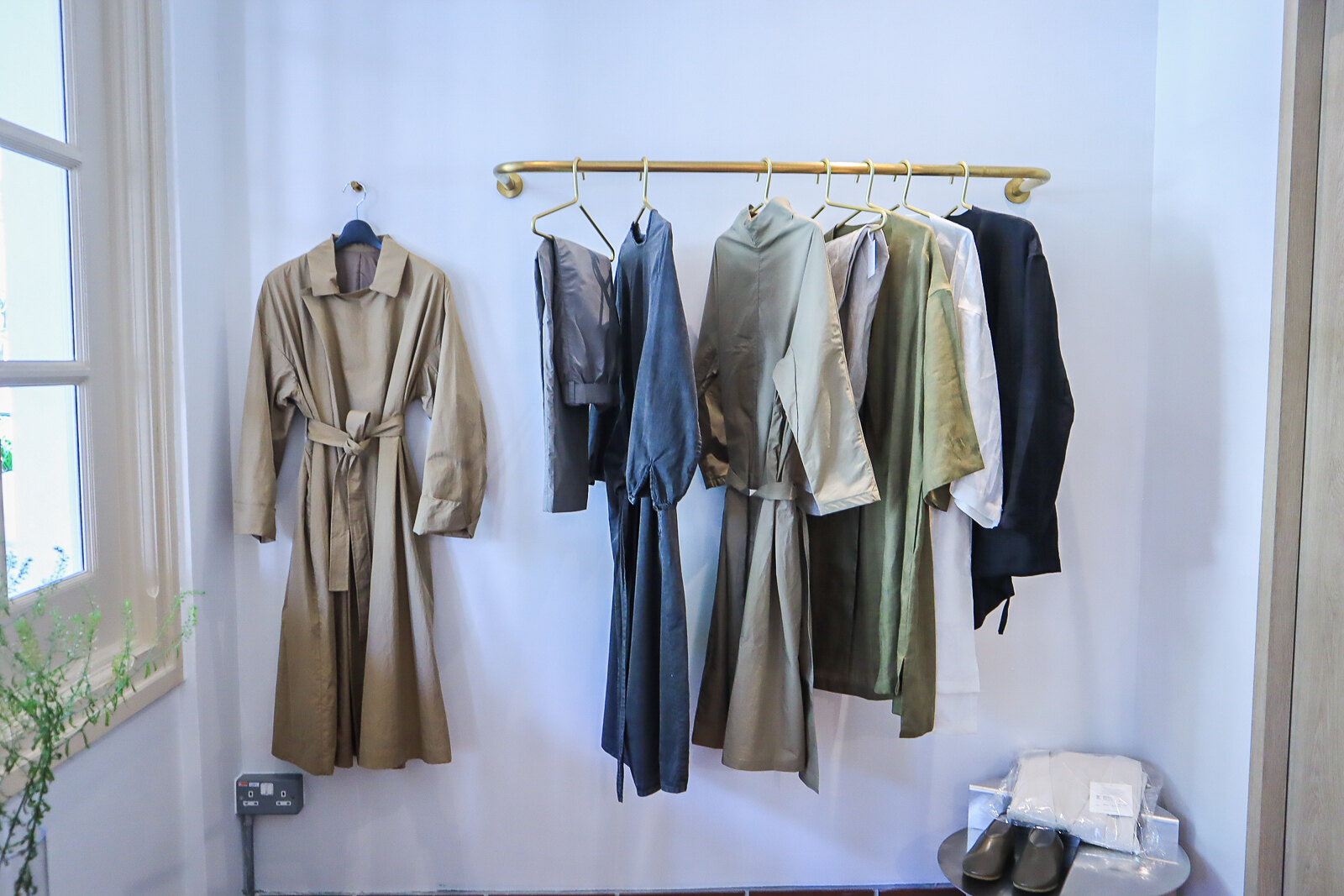 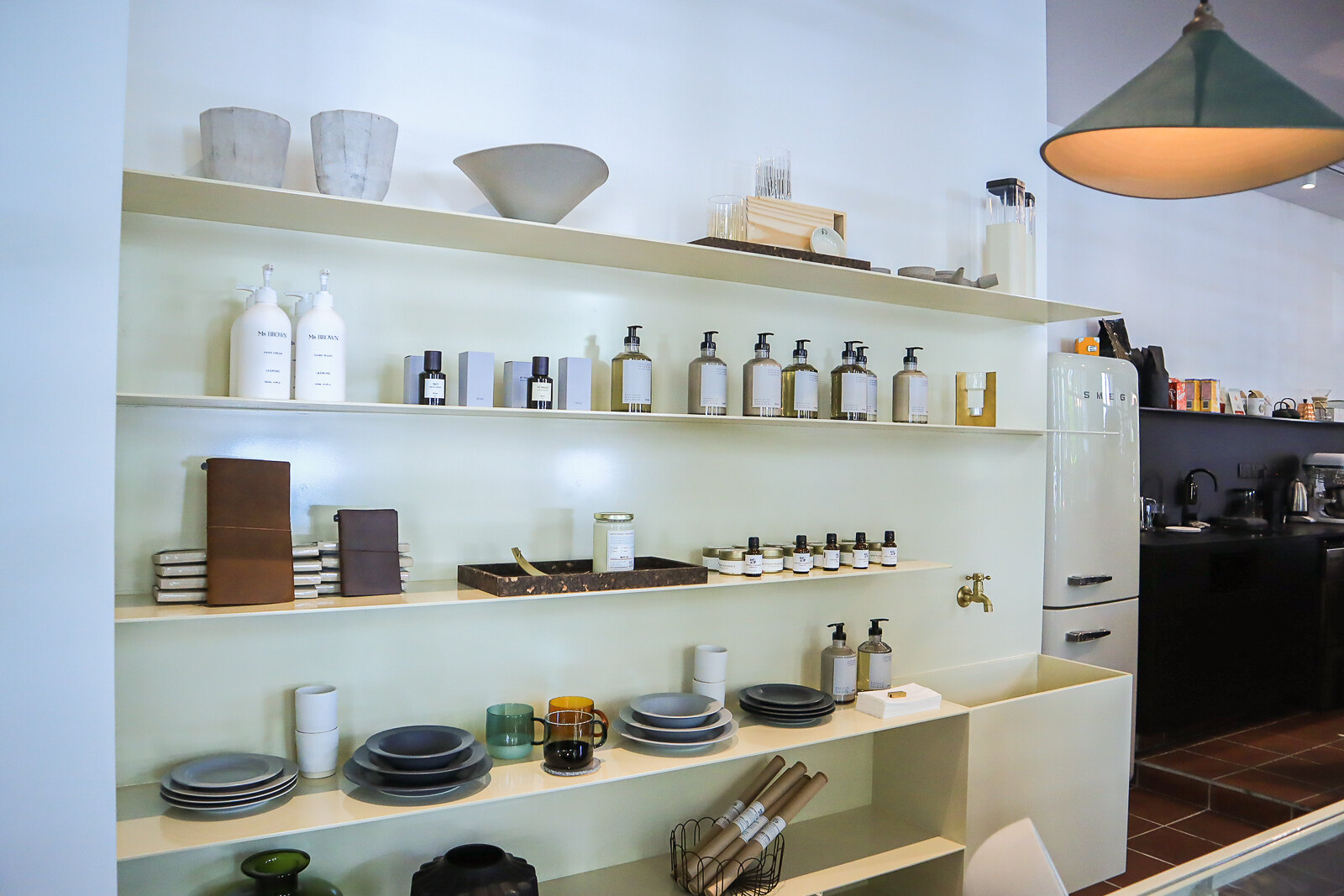 Dressed in white with the glow of soft, warm lights, this sleek new cafe oozes minimalism. There is a separate section that acts as a retail store, selling different products from soap to crockery. 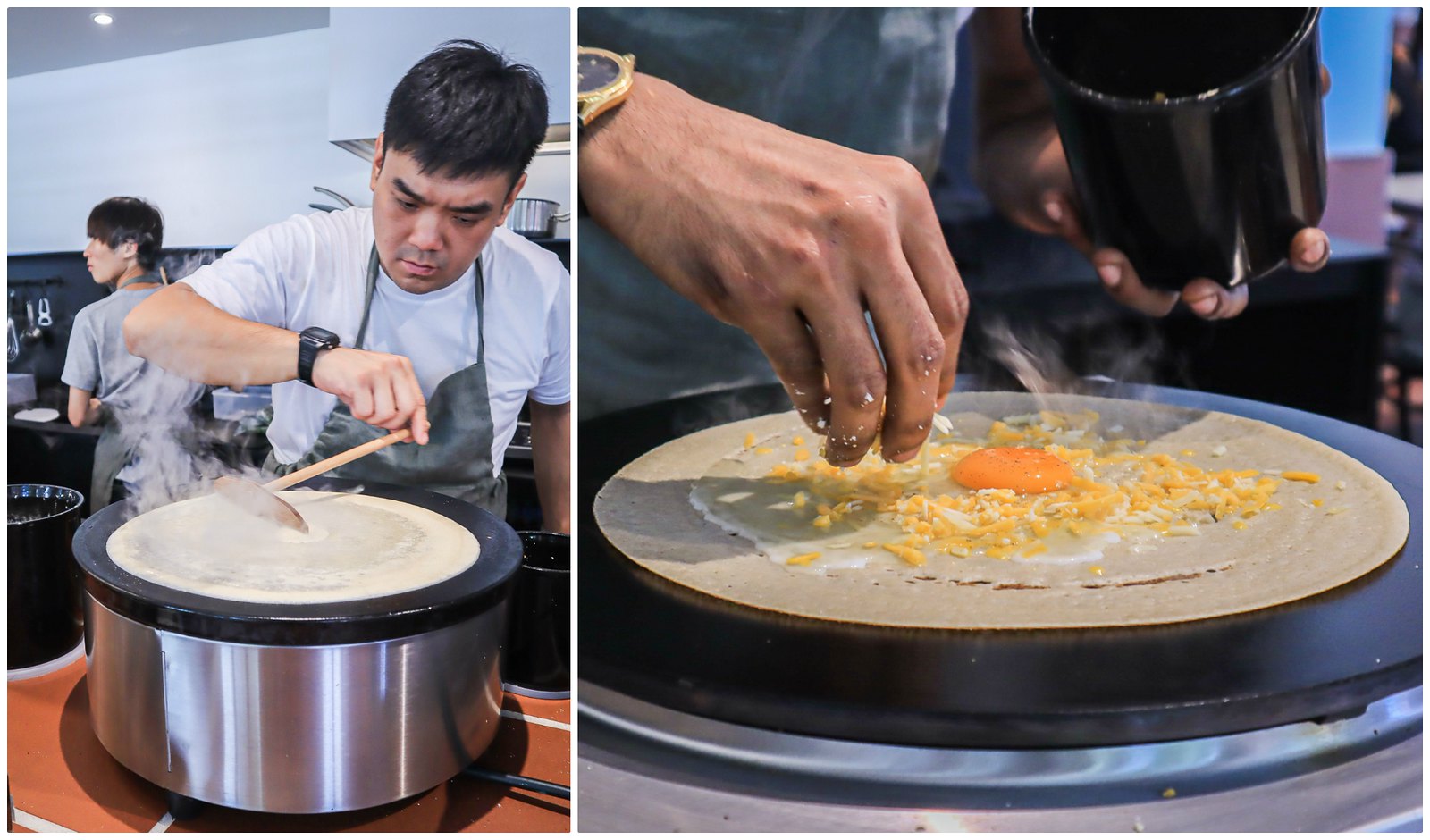 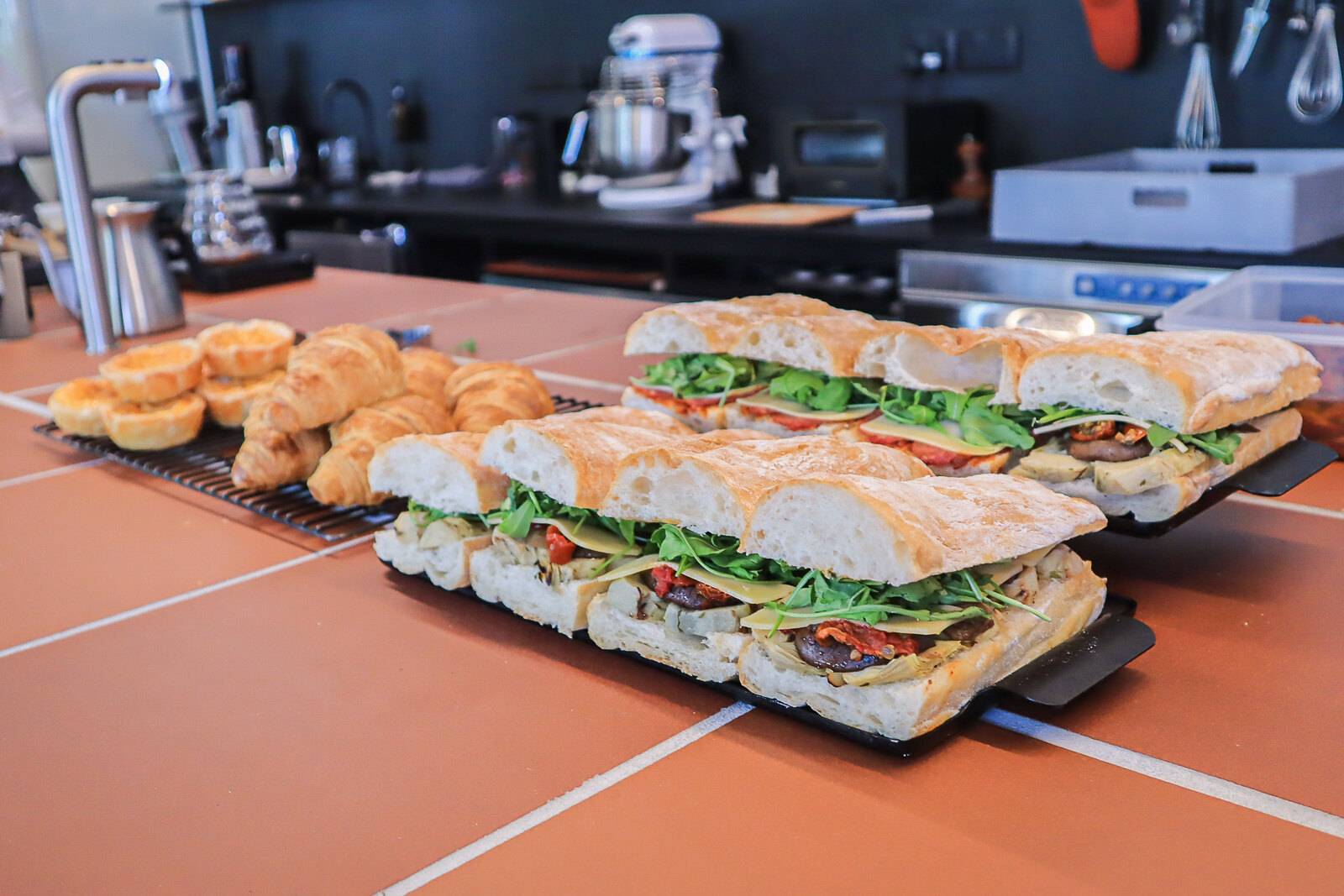 Gather specialises in French crêpes and galettes (the savoury, buckwheat flour version of a crêpe). They also offer croissants, ciabatta, and various other bakes. 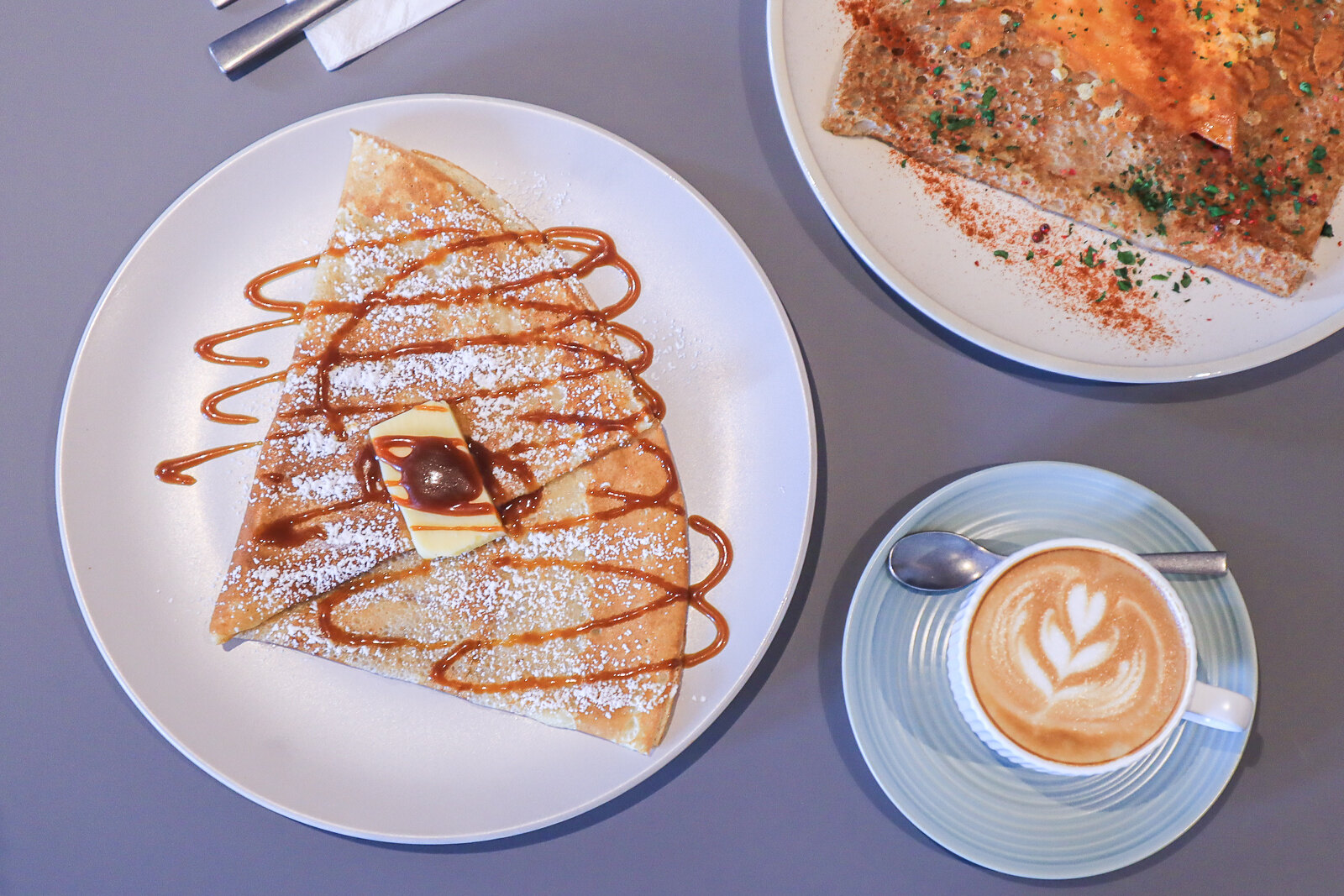 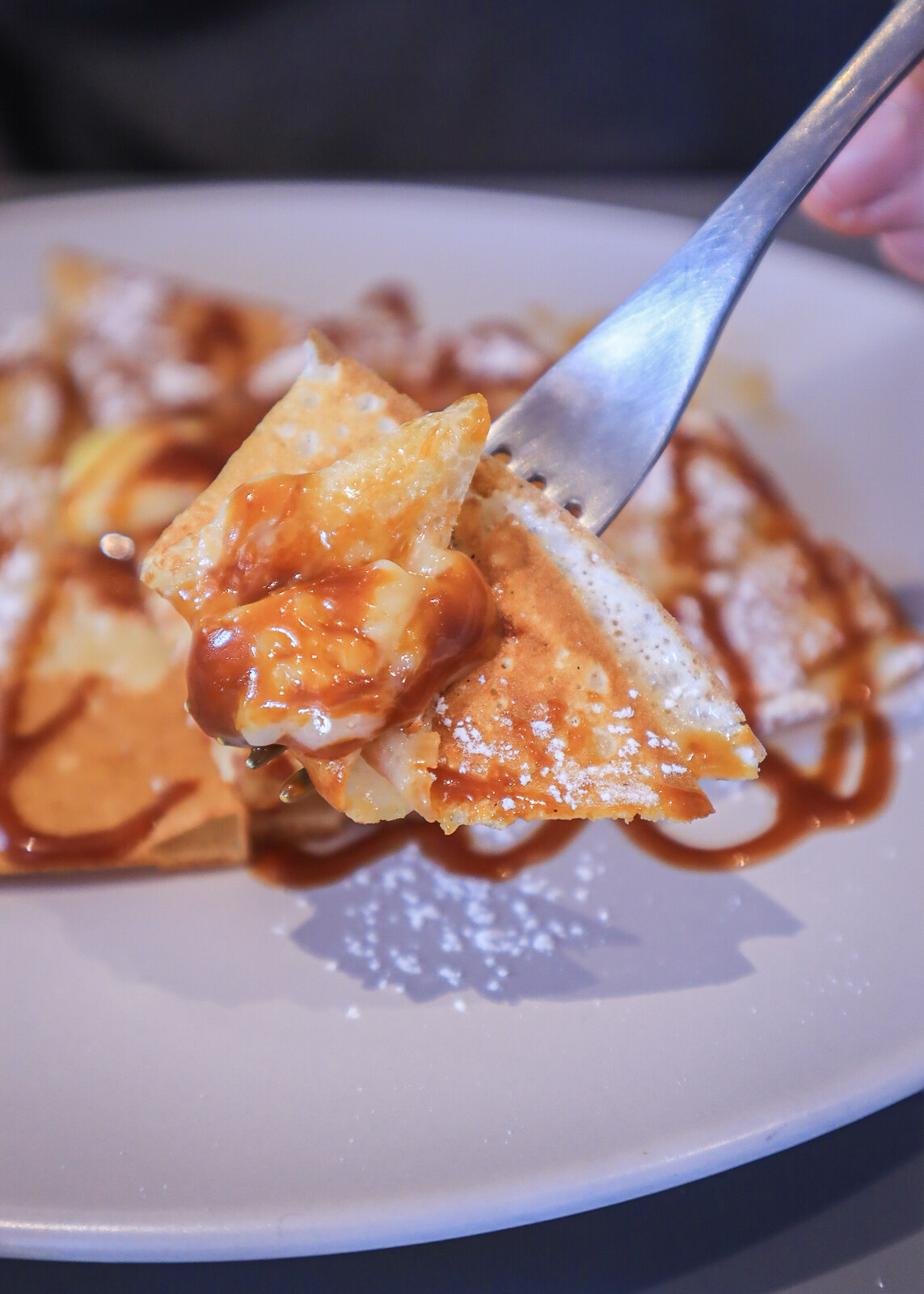 Watching them make the crêpes got my mouth watering. So, I was excited to dig in when the crêpes arrived.

Here, the cafe takes your orders restaurant style, so you can sit back and relax as they speedily serve you. (You have to pay at the counter though.)

We went for the sweet crêpe first. We ordered the Burnt Caramel crêpe ($14) which comes with burnt caramel, and Bordier butter. The crêpe itself was delightfully soft, chewy, and slightly eggy. The burnt caramel gave the crepes a hit of sweetness, but not as much as regular caramel, which tends to get cloyingly sweet after a few bites. The burnt caramel had a darker flavour than the norm, but shying away from being bitter. The bordier butter (allegedly the best butter in the world), was salted perfectly and brought a new flavour profile to the crêpe when spread on. A simple yet scrumptious creation. 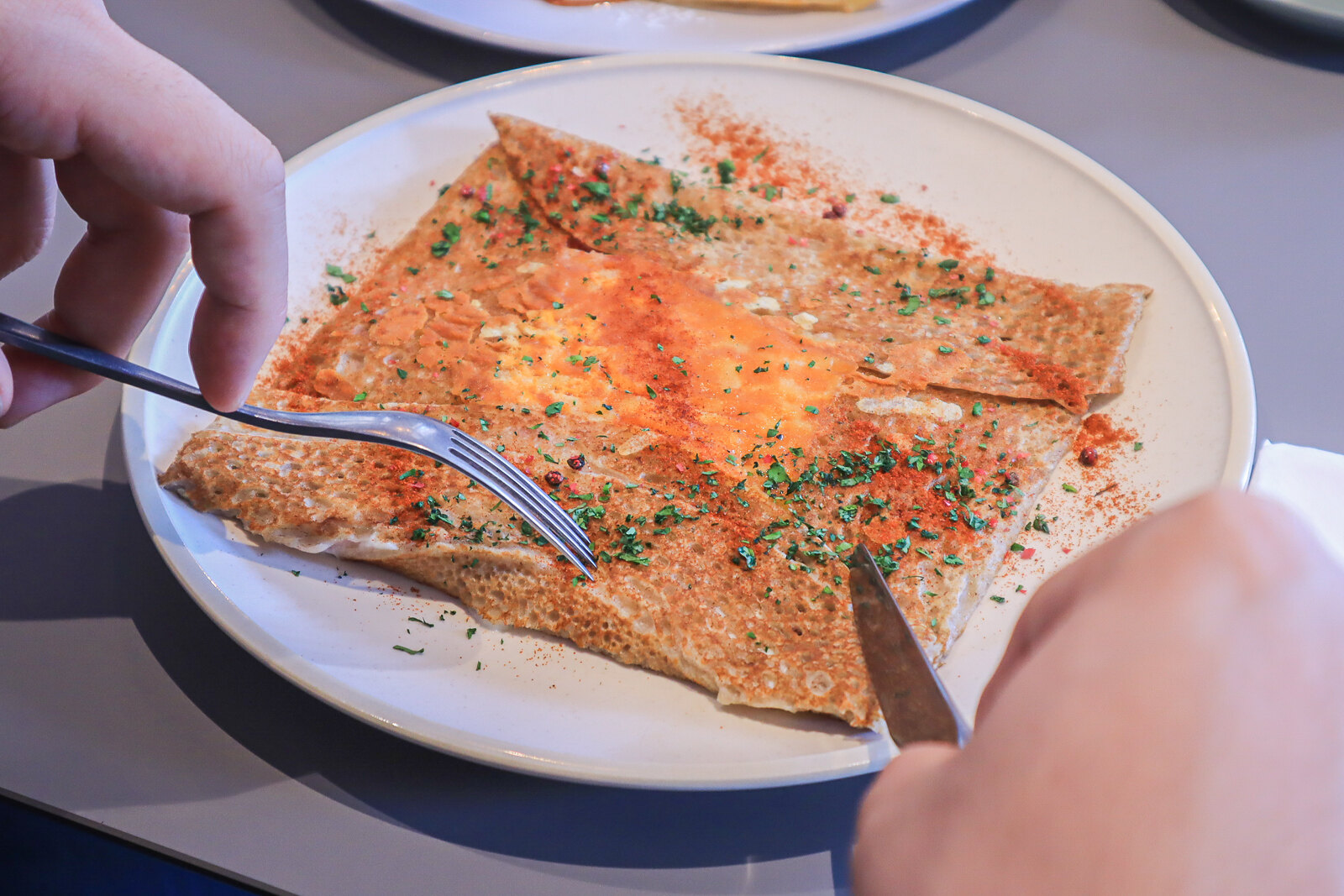 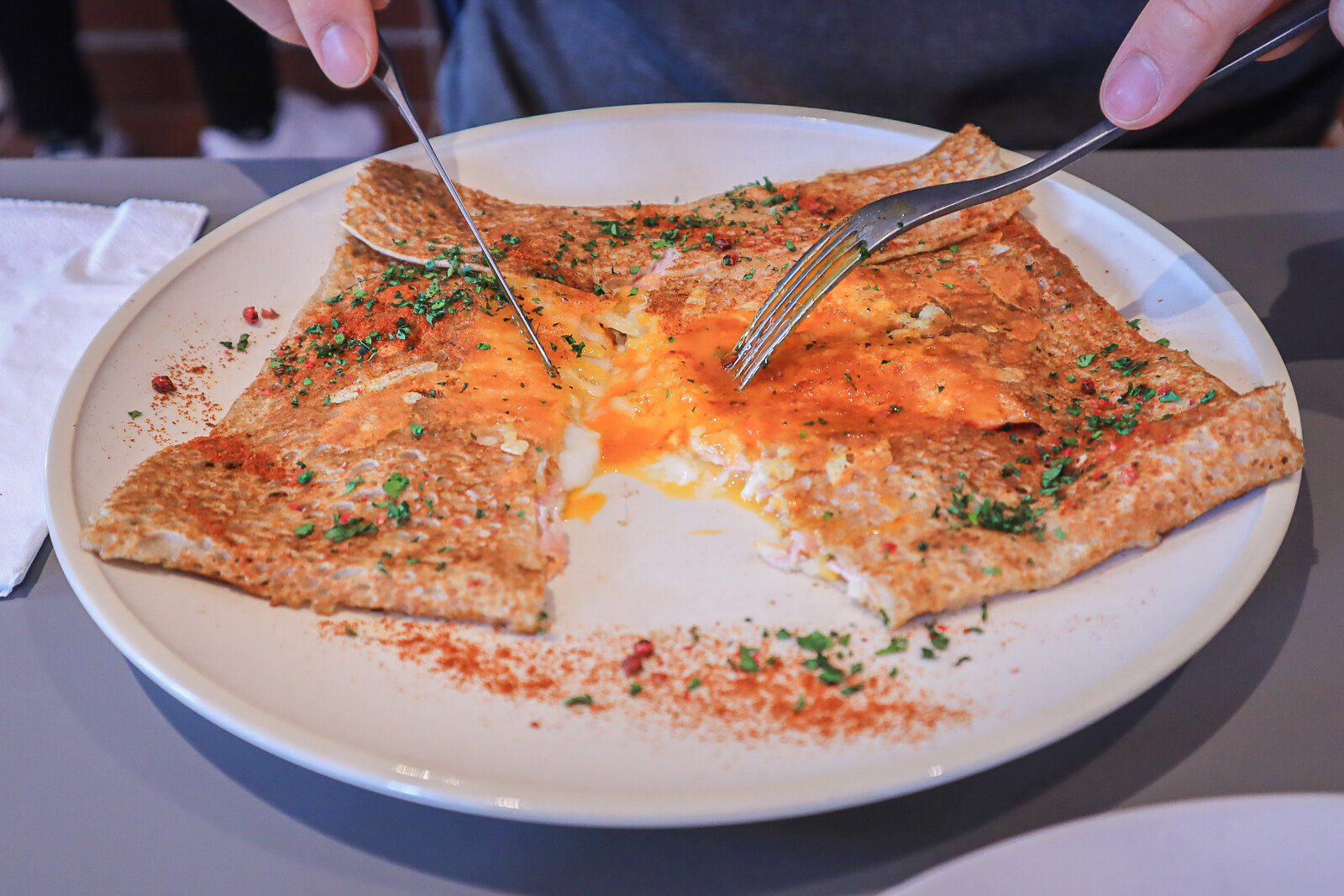 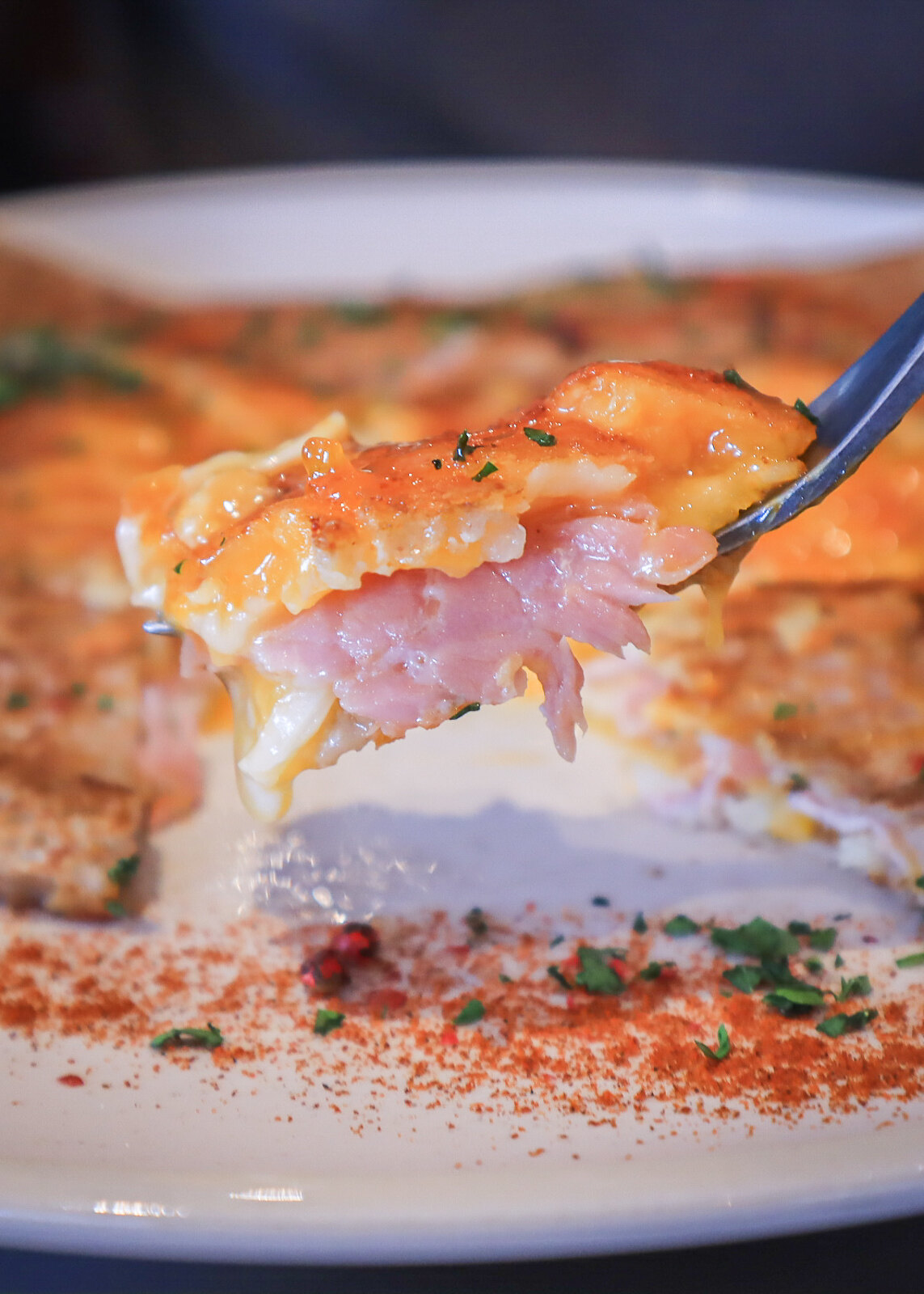 I’ve heard of galettes before, but I never really knew what they tasted like before coming here. I can say that I wasn’t disappointed in the slightest. The Off The Bone galette ($16) — a specialty of Gather — came with classic ham, gruyère, cheddar, and egg. The egg, first and foremost, played such an important role in moistening the galette. The galette itself was quite dry, and had a firmer texture compared to the crêpe.

The combination of galette, ham, cheese, and egg left me speechless from the very first bite. Think of it like a premium ham and cheese sandwich. I know it sounds like a common mix of ingredients, but that doesn’t make it any less appealing. The gruyère to me, played the biggest part in giving the galette flavour. I’ll admit that the saltiness hit like a truck, but all is forgiven when it just brought the whole dish together. The pink peppercorns sprinkled at the side gave an extra pop of spice and crunch, without it being too intense like black peppercorn. The cayenne pepper added colour but did nothing for the dish.

My only gripe is that the cheese seemed to be concentrated mostly in the centre of the galette, which left the ends a little bare and bland. 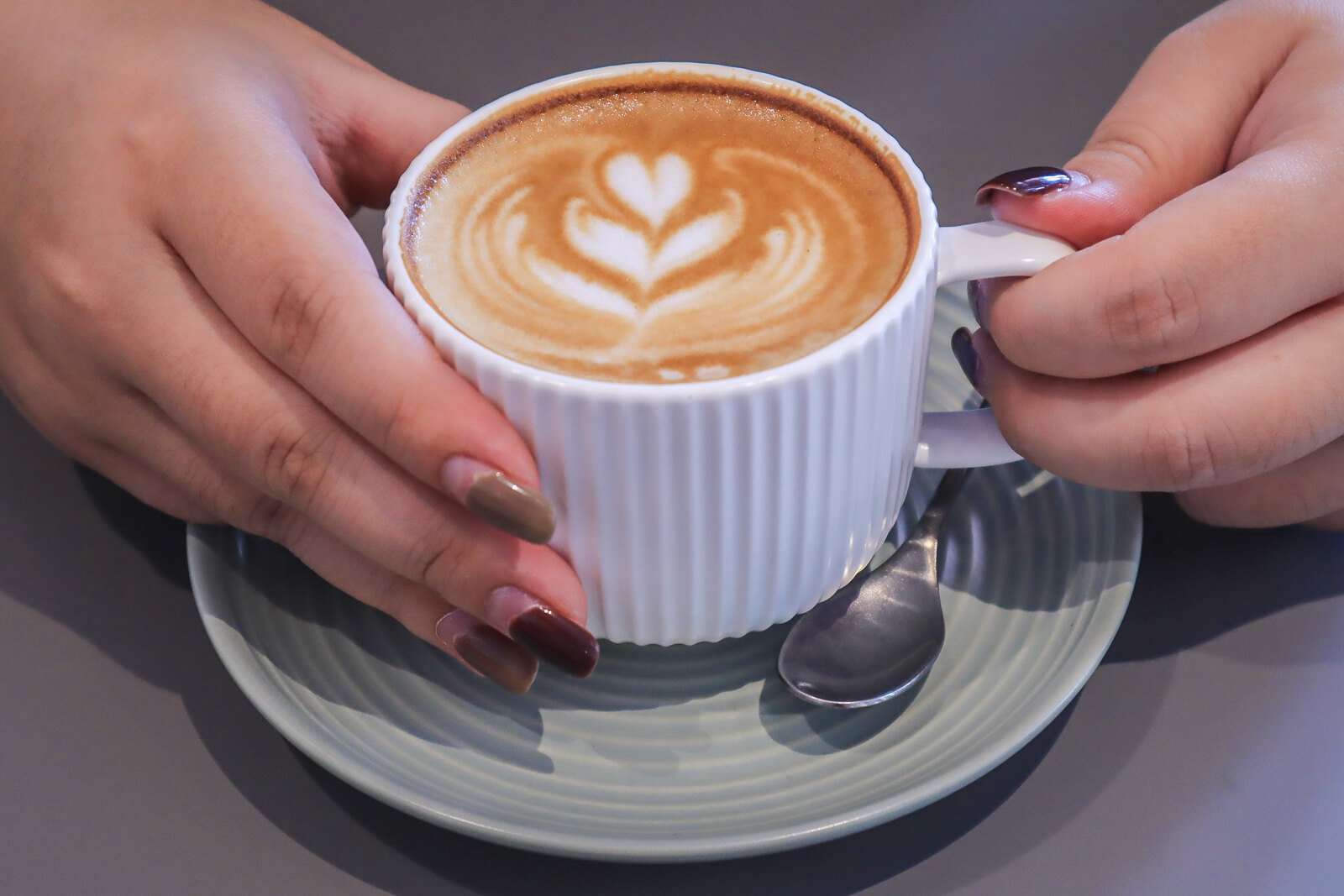 Drinks are also available here! We got the flat white ($5 for 5 oz | $6 for 8 oz) which came with lovely latte art. It was a decent cup of joe to start the morning off right.

Do come here to get some amazing crêpes and galettes. The galettes especially are quite unique, and not commonly found in Singapore, so I recommend getting them when you’re here!

Let’s build a food community that helps to update the food news in Singapore! Simply comment below if there’s any changes or additional info to Gather. We will verify and update from our side. Thanks in advance!