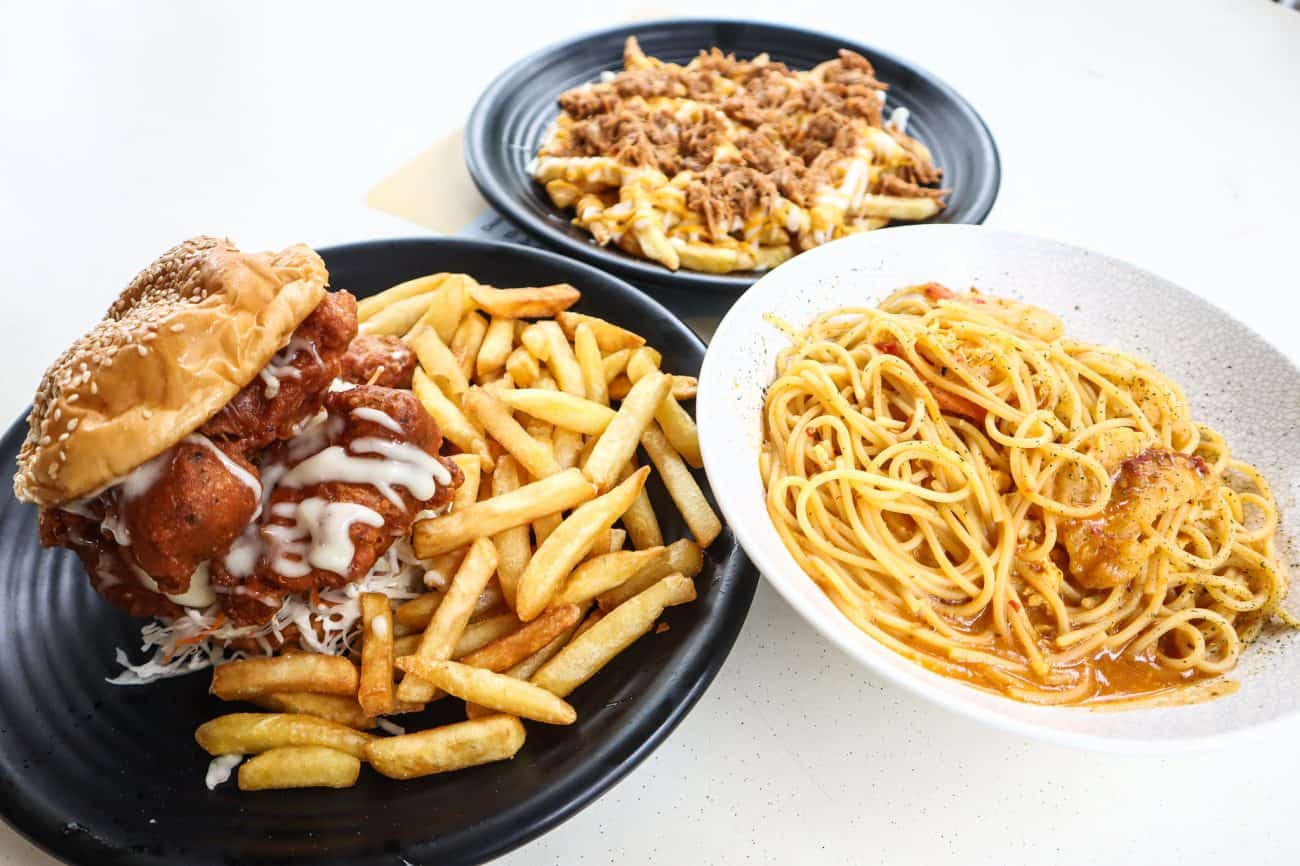 A week ago, I was in the Bukit Batok neighbourhood to check out a Hokkien mee place and chanced upon this Western food stall with a couple of fusion dishes on the menu. Naturally, this piqued my interest but judging by the looks of the food that fellow patrons have ordered, I knew I was in for a super filling meal. Spoiler alert – you’re gonna have to share or bring along a very empty stomach. 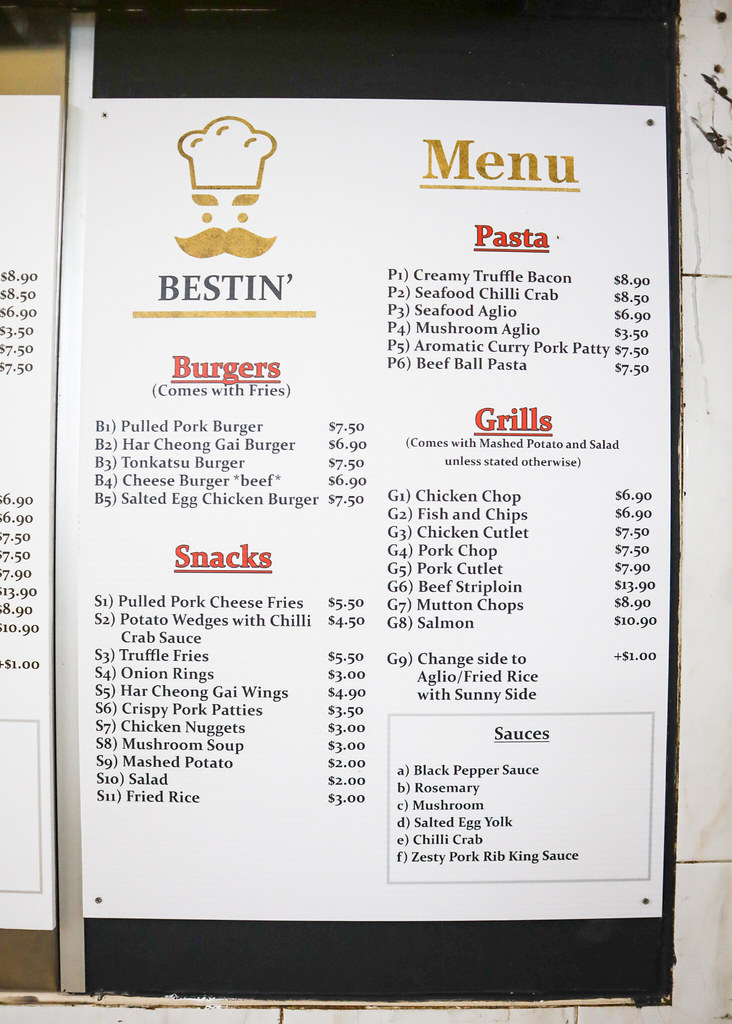 The menu boasts quite a variety of choices that will put any indecisive person into low-key panic mode. A few options were more eye-catching than others — the Tonkatsu Burger ($7.50), Aromatic Curry Pork Patty ($7.50) and Mutton Chops ($8.90). They even have Potato Wedges with Chilli Crab Sauce ($4.50)! 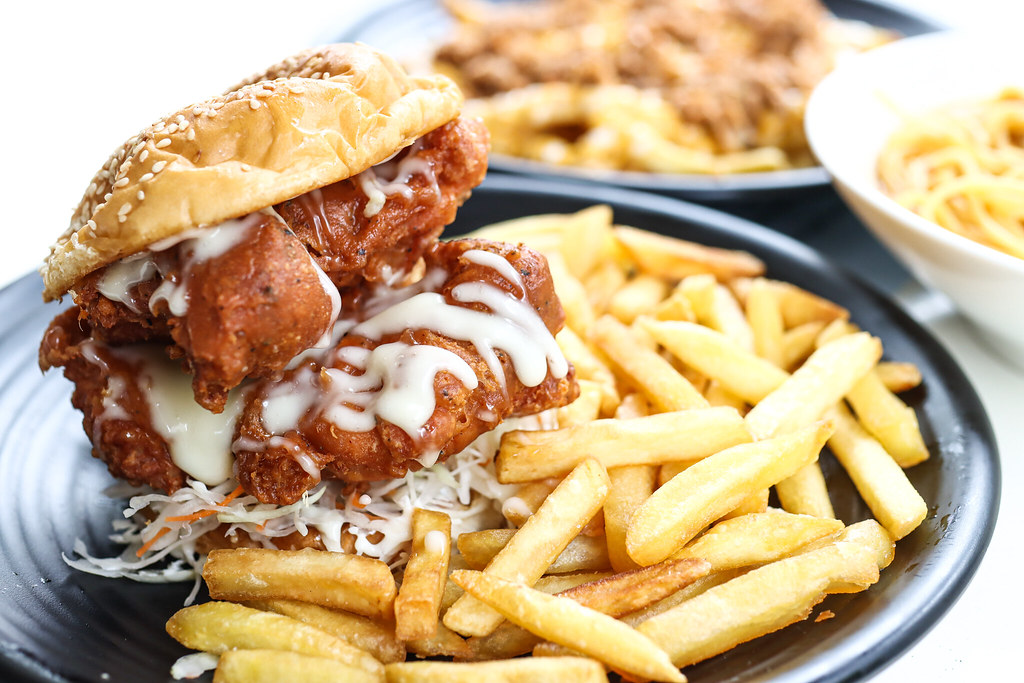 The first thing that caught my eye was the Har Cheong Gai Burger ($6.90). And boy, was this a doozy of a burger! I was presented with a plate carrying this massive monster with a big serving of fries on the side. The towering burger had two large pieces of har cheong gai and a bed of coleslaw sandwiched between two toasted buns.

Now, as someone who is not a fan of coleslaw, I was a little miffed that it came inside the burger. Maybe they could put it on the side? The burger also had an excessive amount of mayonnaise which was distracting when it came to the taste of the har cheong gai itself. 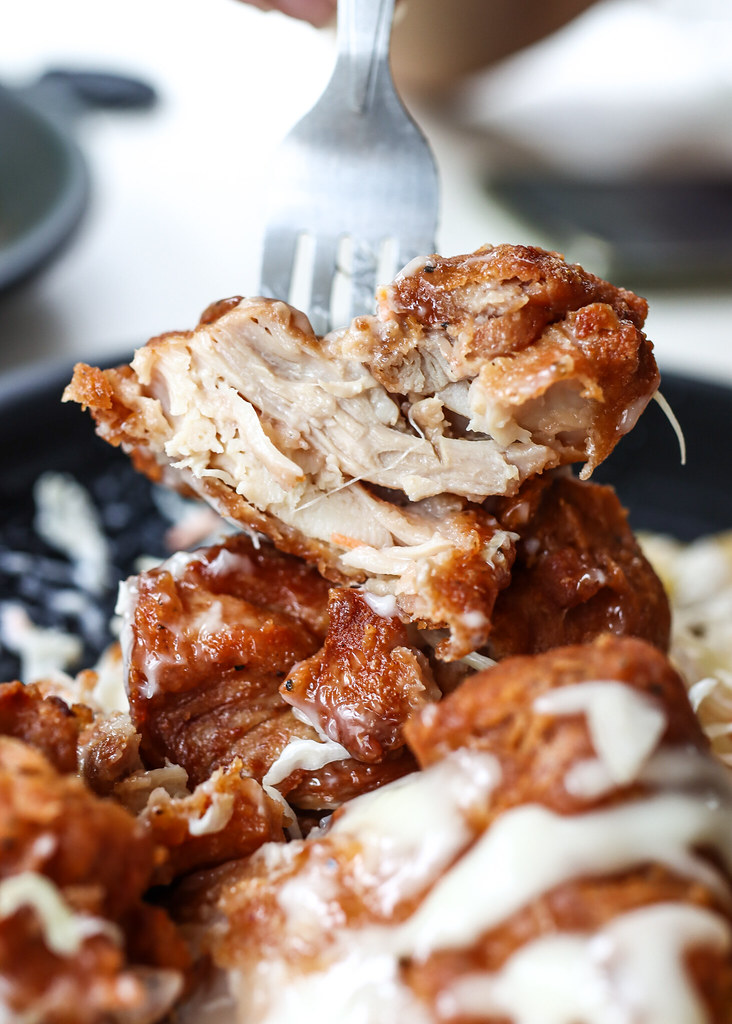 The burger was so big that there was no way I could use my hands to eat it the normal way so I had to settle for deconstructing it. There was a bit more batter than chicken itself, but overall it wasn’t too bad. There was a satisfying crunch and while it was more of the fish-and-chips type of texture, the fragrance of the prawn paste came through. I also noticed it was a little on the sweeter side. 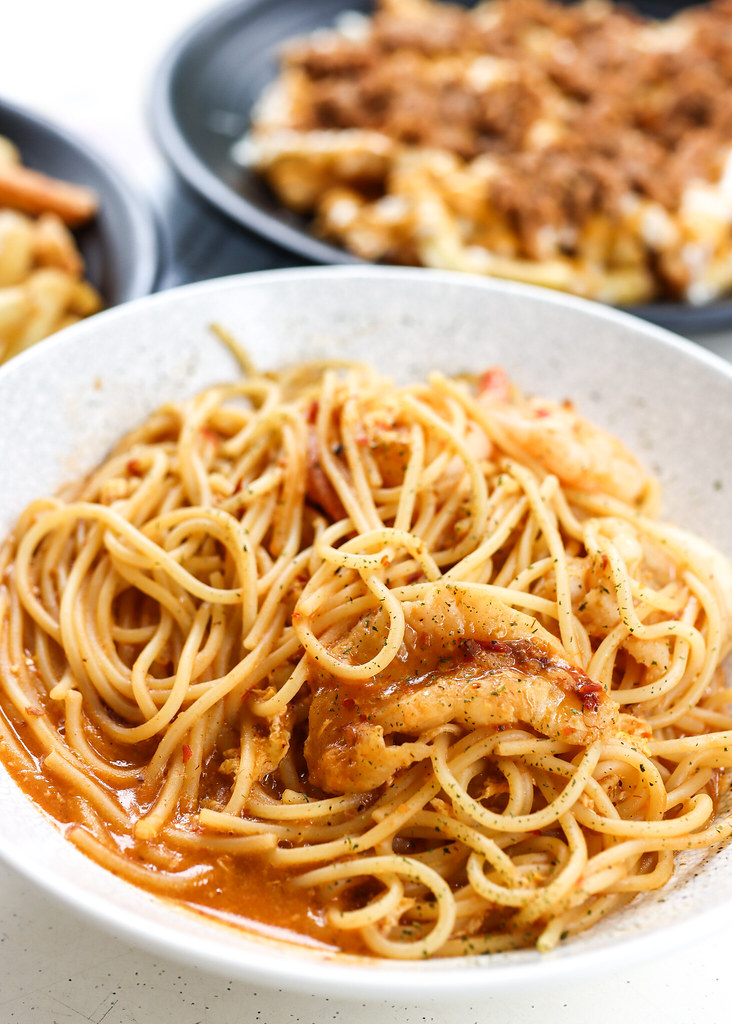 Chilli crab pasta has been becoming a popular item on the menus of cafes and fusion Western stalls, so I took a chance with the Seafood Chilli Crab ($8.50) to see how it fared. While I appreciated the generous amount of pasta, the ratio of spaghetti to sauce was a bit off. I felt that they could have afforded to be a bit more heavy-handed with the latter. 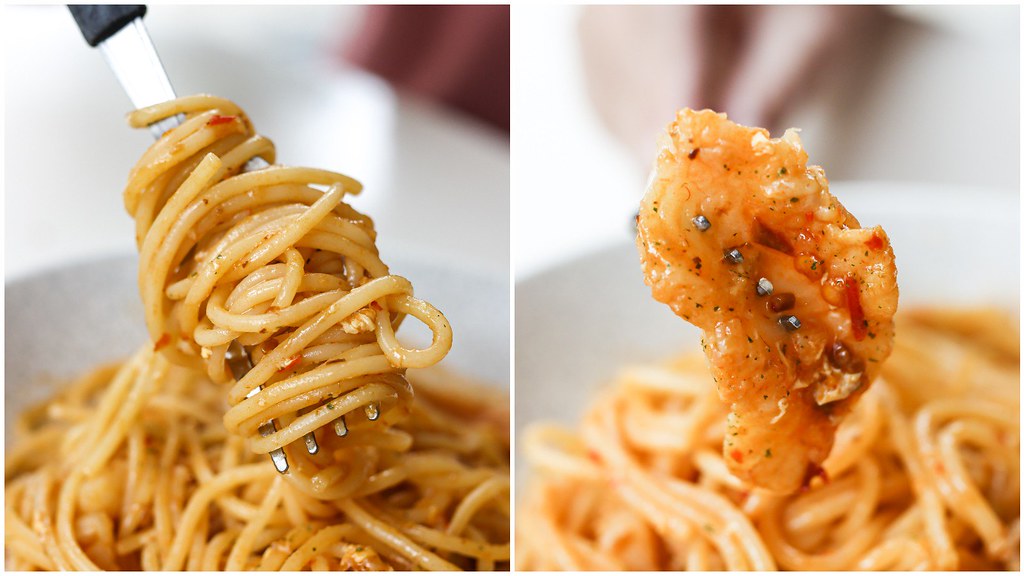 The sauce had a nice, spicy tinge but it could have been sweetened a bit to really replicate the taste of chilli crab sauce. The ratio of seafood to pasta was also incredibly underwhelming. I had to go on a treasure hunt to fish out a couple of prawns, sotong and what I thought was chilli crab but turned out to be fish (chilli crab pasta minus the chilli crab meat? Why?). 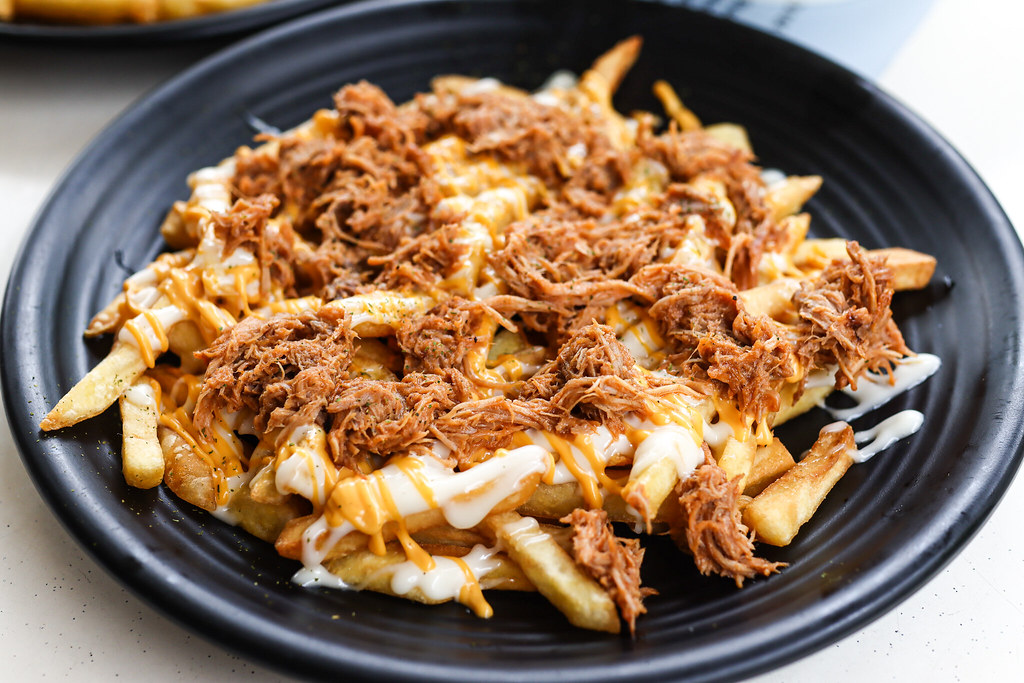 From the snack section, the Pulled Pork Cheese Fries ($5.50) was what got my attention. However, calling it a snack was an understatement. This was a pretty large serving of fries but then again, what was I expecting for the amount I paid? The crispy fries had layers of nacho cheese and mayonnaise drizzled across before being loaded with pulled pork. The latter wasn’t seasoned but maybe the owners were worried that the seasoning might clash with the sauces. 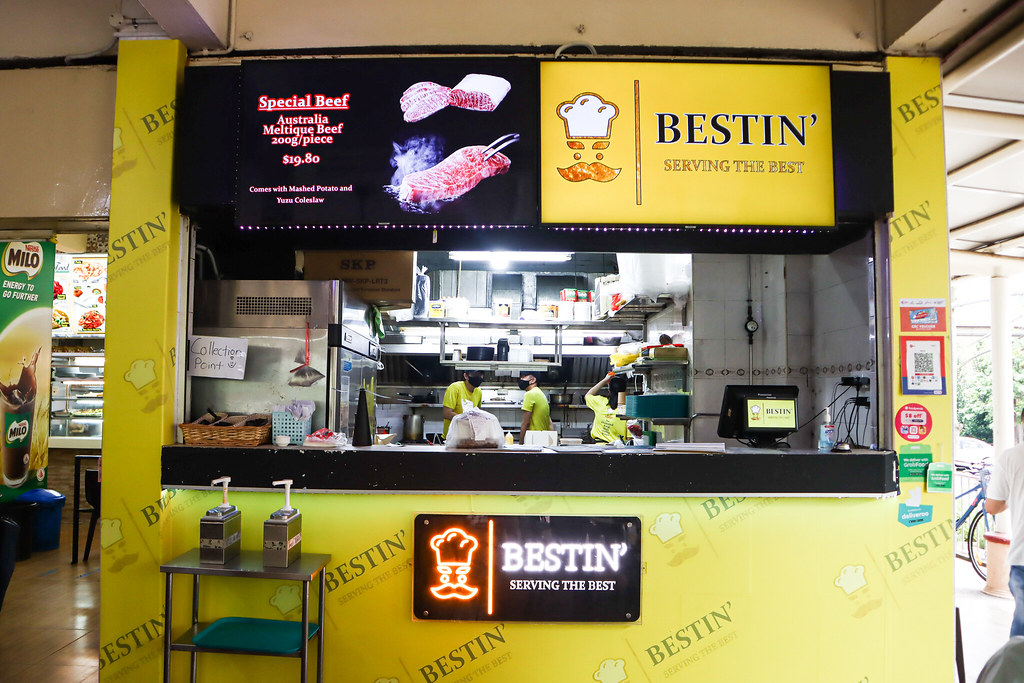 While it’s not the best like its name, Bestin’ Serving The Best does serve up decent nosh if you’re looking for a very filling and rather affordable Western fare.

Let’s build a food community that helps to update the food news in Singapore! Simply comment below if there’s any changes or additional info to Bestin’ Serving The Best. We will verify and update from our side. Thanks in advance!